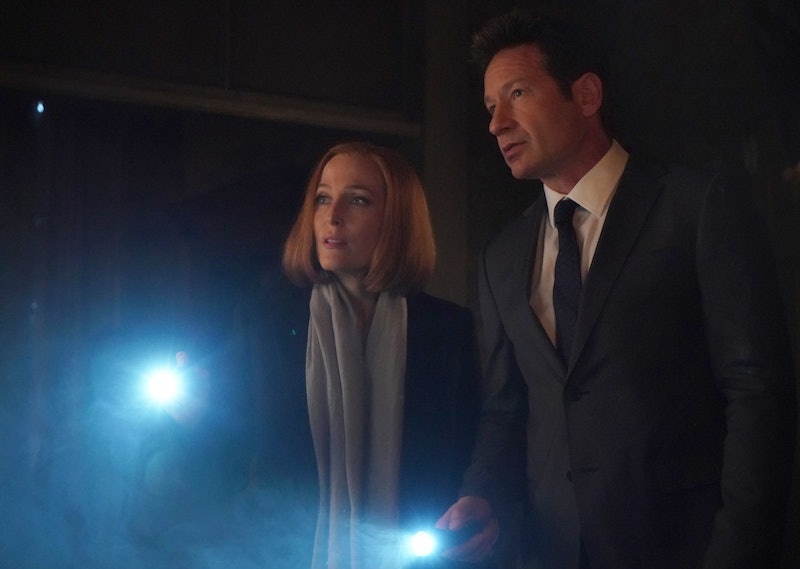 The truth is out there, and Mulder and Scully are going to return to find it. The highly anticipated X-Files revival series is due to creep its way back onto our screens in January 2016, and fans who didn't get to see the first episode early at New York Comic-Con are beside themselves with the burning need to have it now, now, now. Luckily, FOX has been whetting our appetites very well by releasing lots of small teasers and not-so-small promotional photos — and such is the case on Wednesday. The new X-Files revival posters are amazing, mainly because they aren't just about Mulder and Scully anymore. These new posters feature the Cigarette Smoking Man and FBI Director Walter Skinner as well, because even a team as great as Mulder and Scully would be nothing without their ensemble.

For those who need the refresher, Walter Skinner, played by Mitch Pileggi, is the supervisor of the X-Files division, who proved to be an antagonist to Mulder's wild flights of fancy at first. At least until he came to realize what the audience had already known: Mulder knows what's up, and the supernatural is very real. The fan favorite character is a favorite of Mulder's as well, who was shown to still be friendly with Skinner even after everything the FBI put him through. Meanwhile, the Cigarette Smoking Man is an infamous antagonist of the series who actually does have a name — C.G.B. Spender — but who can be bothered to remember it when his fan alias is so much cooler?

Check out the posters below, while I try to figure out what they tell us about the revival.

One sad twist in the revival is the fact that Mulder and Scully are apparently no longer in a relationship, after we spent so many seasons hoping and praying and wishing that they would get together. However, this poster makes it very clear that just because things ended between them doesn't mean that the pair can't work as the same effective team they've always been. Their status as back-to-back badasses taking on the supernatural world hasn't changed just because they aren't romantically involved anymore, and that's a relief.

The Gang's All Here

Here we see Scully and Mulder taking on the unknown with Skinner and Cigarette Smoking Man in the light behind them. The fact that Cigarette Smoking Man is even further in the back than Skinner suggests to me that he's still the man behind the man, pulling on strings and working angles to keep himself in power. Spender was a big player in The Syndicate, and remained a key player and antagonist even after The Syndicate was dismantled. The fact that he's still around means absolutely nothing good for the FBI, for Scully, and especially for Mulder.

The intense look on Skinner's face makes me think that something's going on with him that we can only speculate on. And Mulder's expression is... well, classic Mulder. Basically, this revival is going to be completely epic, and I can't wait until January. I guess there's nothing we can do but keep trying to pull whatever clues we can from these posters and teasers, and, of course, begin the countdown to the viewing party. Trust no one.