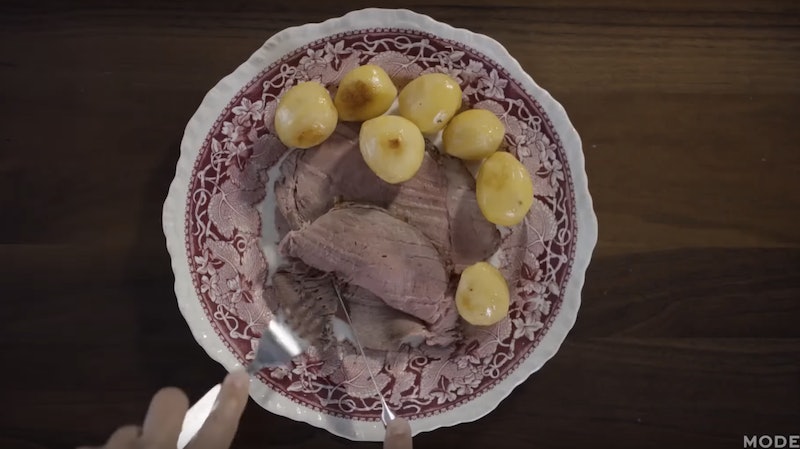 Remember the good ole days in 1915 when we all sat down to dinner, reminiscing over plants or the sky or whatever people talked about before there was Internet? ... Yeah, me neither. But now that Mode has brought to life "100 Years Of Family Dinner," you can get an idea of what it might have been like to get your nosh on with your great-grandparents in the days before you could passive-aggressively ignore each other at the dinner table over smart phones or reruns of Friends.

It's surprising to exactly nobody that as time progresses in this video, showing typical dinners from 1915 to 2015, the meals get a little easier to cook (and, to some degree, unhealthier) with every decade. I guess back then there were fewer memes to laugh at and more time to measure ingredients or something. (Also, probably fewer apps that would bring you pizza after texting them an emoji.)

So hey, fellow young'uns, this is how your grandparents/parents ate back in the day. Here are a few meals that will take you on a walk down their memory lane (unless you're a vampire, in which case this happened, like, eight seconds ago for you):

What probably was a big production back then is about a 30 second dump-and-glump from a can nowadays.

Mother to the Lunchables that we grew up on in the '90s, TV dinners revolutionized the dinner standard for Americans pretty much forever.

A little later in the videos you see how we branched out and started eating foods from other cultures, instead of sticking to our "meat + potatoes = chill" formula. God bless us and God bless Chipotle.

Here's the video, where you can get the full scope of different meals we ate throughout the decades, and also feel an appropriate amount of jealousy for whoever got paid to eat all of these meals during filming:

More like this
I Tried The $20 TikTok Viral Oishii Strawberries — Here's What I Thought
By Sophie Hanson
Trust Me, Pickle Martinis Are The New It Drink Of The Season
By Emma Carey
On TikTok, A ‘Snackle Box’ Is The Best Way To Pack Charcuterie On-The-Go
By Meguire Hennes
22 Movies On Netflix That Are Perfect For The Whole Family
By Bustle Editors
Get Even More From Bustle — Sign Up For The Newsletter