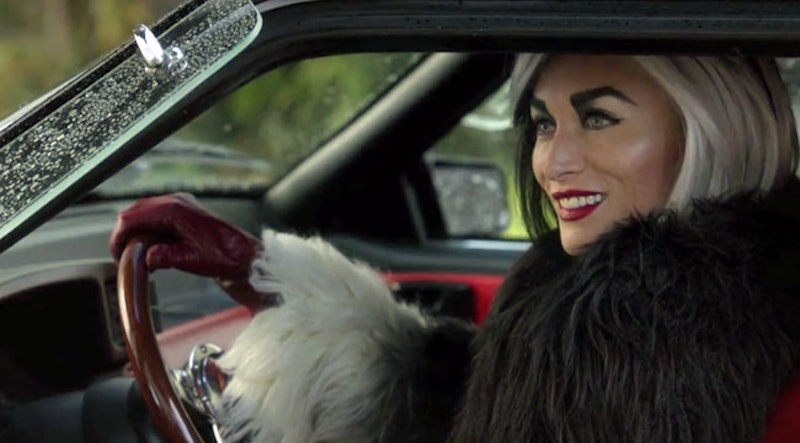 If you're a Once Upon A Time fan, you probably have mixed feelings on the Queens of Darkness storyline. On one hand, it was a lot of fun to come face-to-face with Maleficent, Ursula, and Cruella de Vil and see what kinda trouble they could stir up in Storybrooke; on the other hand, they didn't wreak quite enough havoc for my tastes and it seemed like a bit of a waste. Because of this, Emma giving into her first taste of darkness by killing Cruella for threatening Henry wasn't that big of a blow, though it was a shame to lose the delightful Victoria Smurfit in the role since she was pretty great. If you feel the same, I've got some good news for you: Cruella de Vil is coming back to Once Upon A Time.

I know what you're thinking: Cora and Peter Pan are coming back to Once, so Cruella is just another name on the list of dearly departed who will pop up during the show's 100th episode. That would be fine if it was actually the 100th episode she was coming back for, but it isn't. In fact, Cruella will appear in several episodes in the second half of the season, which will premiere sometime in March 2016.

OK, I'll be honest — I have no idea how this is possible, but I'm pretty excited about it. After all,besides Maleficent (who seems to have poofed off into invisibility along with her newly-found dragon daughter and Emma's childhood pal, Lily), Cruella was one of the most sketched out villains of Season 4, and there was tons of potential there for her storyline. I'd have loved to delve more into why she was so into killing as a child to begin with — I'll bet that was a story. And while it's unlikely that we'll be delving into that, it'll just be good to have her back on our screen.

My best guess is that Cruella will be seen during our time in the Underworld, if she is indeed dead. While the 100th episode — which will serve as the Season 5B opener — is probably going to be our first foray into "hell," that doesn't mean it's the only episode we'll spend there. If one of our main protagonists has some demons to confront, we could spend quite a while there while the storyline progresses, and Cruella could just be hanging about. After all, her last name isn't "De Vil" for nothing.

With so many familiar faces returning, it's pretty exciting to think about what's to come, but I can't wait! Bring on the rest of the first half of the season, because I have a feeling that the second half is where things are really going to kick off.