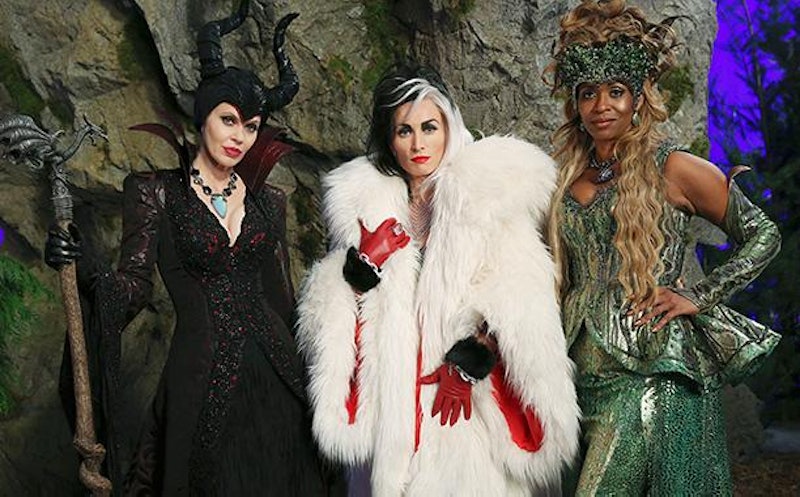 Three familiar faces are about to invade Once Upon a Time. Fans of the ABC show have been anxiously awaiting the return of wicked sorceress Maleficent, but this time she will be joined by two deliciously evil villains straight from the Disney vault. This Sunday's Once Upon a Time will finally bring together the Queens of Darkness — Maleficent, Ursula, and Cruella de Vil — and they are going to SHAKE. THINGS. UP. However, as fierce as these women are, it seems their costumes lack a certain je ne sais quoi and desperately need a jolt of high fashion.

While Once Upon a Time takes a lot of creative license with the development of each character, the series often receives harsh criticism from fans who feel that the costumes don't translate well from the beloved animated versions to IRL actors potraying them onscreen. Facing that pressure, the show recently introduced Queen Elsa from Frozen to Storybrooke and kept her look as close as possible to the hit Disney film.

Kristen Bauer van Straten's return as Maleficent, along with the addition of Victoria Smurfit as Cruella and Merrin Dungey as Ursula gives Once Upon a Time an opportunity to breathe new life into the once promising show. So, it's only fair that these ladies of mayhem wear outfits that are worthy of their fierceness and "fabulosity." While Maleficent's outfit is drastically different from Season One, it simply looks like a budget version of Angelina Jolie's elaborate costume in the feature film version. The same goes for Cruella's two-tone ensemble, which somehow loses the uptown glamour that Glenn Close served in 101 Dalmatians. And as for Ursula, let's just say that the sea witch is supposed to sing about poor unfortunate souls — not dress like them.

With the help of recent Fashion Week collections from top designers, let's see how Once Upon a Time's Queens of Darkness can upgrade their wardrobe:

As someone who knows how to make an entrance, Maleficent deserves something truly sinister and dramatic to bewitch everyone around her. Pugh's avant-garde warrior aesthetic will work its dark magic in and out of Storybrooke.

First of all, they should have just kept Ursula's outfit in The Little Mermaid . It's fine to use The Birth of Venus for a palette inspiration, but the character's new costume loses her va va voom. Posen's iridescent ballgown on Ursula — like on Naomi Campbell — would be perfection (with room to fit her tentacles).

There will be fur. And in Cruella's case, a complete departure from her black-and-white wheelhouse without sacrificing her glamorous flair. Williamson's bold floral print is also more pleasant to look at than dalmatian spots.

Once Upon a Time's original HBIC is hands down the show's most fashionable character and only she can slither into any scene wearing a metallic Tom Ford LIKE A BOSS.