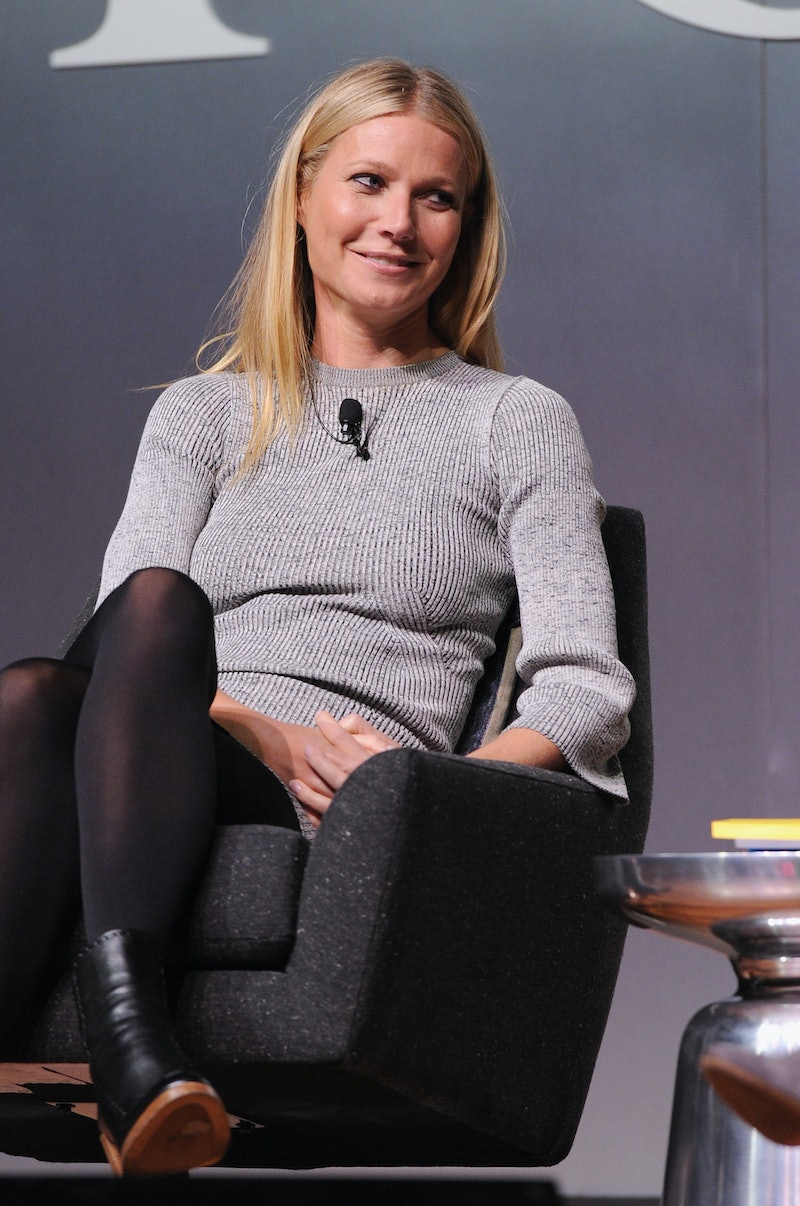 In the years since the launch of Gwyneth Paltrow's Goop, it's been made abundantly clear that the site is not for everyone. But regardless of what you think about it, it can't be denied that the actress is just doing her — whether that means promoting vaginal steaming or selling an outfit that'll set you back a couple thousand dollars. And, thankfully, Paltrow knows that there's room for every other actress-turned-lifestyle mogul out there, so they can share their own voices, too. Asked by moderator Katie Couric about the websites and brands that have been popping up from other celebrities at the Fast Company Innovation Festival on Tuesday, Paltrow says, "We're living in such an exciting time where women feel that they have the capability and the permission to expand and to go into different areas, and I think it's terrific."

Couric specifically brings up Reese Witherspoon's Draper James, Jessica Alba's The Honest Company, and Blake Lively's now defunct site Preserve. Paltrow explains that she knows many of the women who have started their own projects personally. "I talk to those girls all the time. Jessica and Reese are my friends — Reese is an old good friend of mine. And when Lena Dunham and Jenni Konner started their newsletter I talked to them all the time. I'm their Lisa Gersh. A much dumber version."

Gersh is the CEO of Goop — the business side of the company, while Paltrow runs creative — who was also a part of the Fast Company conversation. It's hard to hear the 41-year-old talk about being someone's Lisa Gersh without associating it with the label of pretentiousness that has been, repeatedly, used in regard to Paltrow. Why make a point to label yourself as a mentor, as someone higher up? But hearing her talk, it's clear that she isn't consciously trying to put herself on a different level. Which makes me, in turn, think that when she sells a $600 skirt or tells hard to relate to stories about traveling to Italy and asking locals for restaurant advice, she isn't flaunting her wealth or trying to shove her lifestyle down anyone's throat. She's just doing what she loves and what she knows; it just tends to come off as a lack of self-awareness, because, hey lady, not all of us have been to Europe.

This is why it's great that she is so supportive of others sharing their ideas and stories. While hers aren't for everyone, someone else's may be.

And the fact that she's supportive of women in particular does show a lot of awareness of how in 2015 opportunities are changing for women in a positive way. "It's wonderful to see women feeling entrepreneurial and bullish about what they can bring to the market and to the culture, and I think it's just great," she says.

This is not the first time that Paltrow has spoken out about the comparisons between Goop and the brands of other celebrity women. In a June 2015 interview with Time , she said, "I wonder if George Clooney would be asked about Puff Daddy's ancillary liquor line. I'm fascinated how the media in particular are so confounded by entrepreneurial women doing something outside the box."

Asked on Tuesday if she worries about the competition, Paltrow's words are in line with her previous statement:

No, I really don't. My mother really raised me not to be competitive. I remember when I was first starting acting and feeling competitive and "Oh no" and "If I don't get this part that's it." And she said to me, "There's really a piece of the pie for everybody, and you just need to focus on what you're doing, you need to work hard, and don't look to the side because, you know, you want everybody to do well" ... And I feel like the more water in the ocean, the higher all the boats go. I think we’re all are doing very different things, as well. We all are focused on different markets, so I think it's great. And we help each other and we talk all the time.

Paltrow has lived a privileged life and her celebrity has no doubt helped her find massive success with her website, so it only makes sense that she would support other women doing the same. And I would hope this has a trickle down effect. That not only are famous women being supported to make moves, but that other "regular" women will see this and feel the influence themselves. Maybe I won't be buying a $500 sweater or "eating for my dosha" any time soon, but I can appreciate seeing women starting businesses and expressing their passions by taking on multiple careers at once. Goop isn't for me, but that idea is something I can get behind.