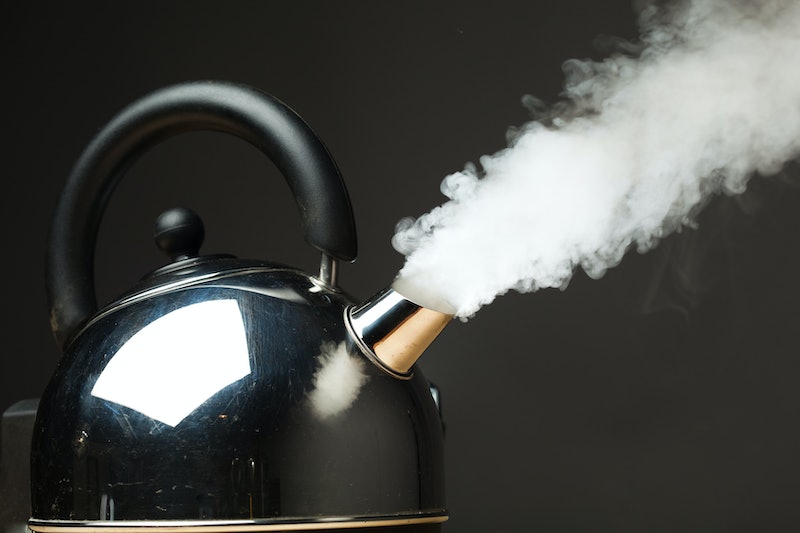 Ladies: have you ever wondered what it might be like to squat over a scorching hot cup of tea with no pants on, trying to concentrate on relaxing and allowing the steam to cleanse your vagina, while also being desperately afraid that you are about to burn your vulva and then have to explain all of this to a really unsympathetic emergency room doctor? Then do I have a treatment for you — it's called "v-steaming" or "vagina steaming," and it's sweeping the nation (and by "nation," I mean "people who wish their vaginas were more like Gwyneth Paltrow").

Though it's had a huge surge in popularity at upscale spas over the past few years, like most "new" health trends, vaginal steaming has been around in some form or another for a very long time. The Korean practice of chai-yok — essentially an herb-infused vaginal steam bath — has been used for centuries to improve everything from fertility to the regularity of one's periods, and is considered an all-around cure-all for your reproductive junk.

More recently, the practice caught on with green bloggers, then high-end spas, and finally, Her Steaming Vagness Gwyneth Paltrow, who extolled the treatment in her latest GOOP newsletter. And thus, a vaginal trend is born.

Consider me a skeptic. On one hand, who am I to say that I know better than centuries of traditional Korean medicine? I mean, I can't even figure out how to integrate my Google calendars. On the other, the new v-steam trend set off all my alarm bells for "stuff ladies with too much time and money on their hands do to their vaginas." I mean, remember vajazzling? Isn't v-steaming just vajazzling for a post-recession, neo-crunchy world where kale is the new Paris Hilton? I decided to do some real-life research.

Is Vagina Steaming For A Decidedly Non-Bougie Type Like Me?

The "v-steam" basically stands in direct opposition to every value I have built my life around; namely that I hate to relax and also that I like to view my vagina as sleek and dangerous, like Linda Hamilton in Terminator 2. A naturopath on the Internet described v-steaming as "nourishing and cozy," which are two descriptors that I generally try to keep as far away from my kitty cat as possible. I mean, it's a vagina, not a bowl of Kashi Good Friends cereal, okay?

But I was intrigued by the steam's supposed benefits for vaginal pain. My vagina has felt parched at times in recent years in a way that sometimes made sex painful, no matter how much lube I used, and Western medicine offered me little in the way of help. "It's just because you're getting old!" my gynecologist told me "helpfully," in what she did not know would be the last time I ever saw her. I hadn't found many promising treatments on my own, either. And such chronic, seemingly unfixable, small-yet-frustrating problems are what lead us all straight to the lair of the GOOP. I mean, this woman seems like she has all the answers, right?

Do-It-Yourself V-Steaming, For The Non-Paltrows Among Us

The Internet is packed full of instructions for doing an at-home v-steam, though in the grand tradition of the Internet, almost every set of instructions I found contradicted all the other instructions that I'd read. Some said that you could simply use plain boiling water; other claimed that you need to pick out special herbs most relevant to your specific lady issues. Some noted that you could v-steam daily; others advise that you only do the steam twice a month, in conjunction with your menstrual cycle. Also, some gynecologists think v-steams are a terrible idea that might negatively impact the bacteria that help your vagina maintain its pH, while at least one gynecologist described the idea of the v-steam having benefits for your vaginal health as "not insane" (which is pretty impressive for something that turned up in GOOP, if you think about it).

I opted to get rosemary and rose petals for my steam (supposedly they are an anti-inflammatory combo). I boiled them in a large pot of water for 10 minutes and then steeped for five. Then, it was game time. All the online instructions urge you to sit while bottomless on a slatted chair with steaming pot under it, as if we all have patio furniture lying about. But, barring that, all the instructions that I read admitted that you could just plunk your steaming pot of herbs in a clean toilet, sit on the throne with a towel draped across your lap, kick back, and reap your vaginal rewards. And so, I did.

The Process (Alternate Title: My Crotch Is On Fire)

For a second. Until I realized that the steam was burning my vagina. I had read that if nothing else, the v-steam is relaxing, but I had a hard time relaxing, because I kept feeling as if I were sipping from a too-hot cup of tea with my nethers. I kept settling in for a moment with my towel, only to jump up seconds later, convinced that I was searing my ladybits. Eventually, I dumped a cup of cold water in, just to be able to tolerate the steam for more than a minute at a time.

Every piece on v-steaming extols its benefits for fertility, the one reproductive health benefit that I want to stay as far away from as possible. But what if the power of the steam was too strong? What if I was helpless before its vag magic? Once things finally cooled down a bit, I plunked down and tried to relax, as this scenario ran through my mind:

Doctor: Well, Gabrielle, looks like you're about eight weeks along!

As for the actual sensation... Once it stopped feeling like burning, it didn't really feel like anything. To me, the v-steam felt kind of like sitting on a heated car seat. It felt neither comfortable nor uncomfortable. As I squirmed awkwardly in the steam, I thought to myself that taking a poop would honestly be more relaxing.

Which brings me to my next point: while the v-steam didn't seem to be doing much for my vagina, it made me HAVE TO POOP LIKE A MADWOMAN. Nothing I had read in either the hippie blogs or the fancy lady blogs had mentioned this as a side effect, but it is my duty as a writer to report the facts, however shameful they may be: sitting there, I frothed with anxiety over the idea that I was going to helplessly poop into a cooking pot full of rosemary and rose petals, and have no one to blame but myself.

Luckily, I was able to make it through my 20 minutes in the steam, and eventually was able to poop into a toilet that did not contain any herbs or a cooking pot. That was the best part of the whole experience, frankly.

The Results (Or Lack Thereof)

As for my actual vagina, I felt no difference, which I immediately started blaming myself for: this was because I was too scared to sit on the super-hot vagina-steam toilet, right? And I certainly didn't feel very relaxed, what with all the fear of burning my junk and then the poop-holding-in-ing.

The Verdict: To Steam Or Not To Steam?

So am I confident in calling v-steaming a total scam? Well, I believe that it could be relaxing, even if it wasn't for me. I mean, of course, this would be relaxing to have someone else prepare for you in a spa; spas are inherently relaxing places, that's how they get away with charging you $100 for a Bioré pore strip. And knowing that my vagina steam was set up by someone whose profession involves knowing how to make sure I don't burn my vagina certainly would have made the whole operation more soothing, too. So maybe the relaxation benefits are real, but perhaps reserved for those who seek professional intervention or know the exact temperature their Agatha Christies can handle.

I also can't (and hopefully won't be able to!) weigh in on the fertility benefits. But in terms of "refreshing" my vagina, I feel like I would have been better off washing it with some peppermint Dr. Bronner's or feeding it a Mentos or something. If you're rich enough to get it done at a spa or unneurotic enough to perch semi-nude over a steaming pot in your own home without worrying about vagina burns, sure, go do it, what the hell. But if you can't, don't feel like you're missing out. Your vagina is perfect the way it is! Also, I am pretty sure someday, we're going to find out that Gwyneth is a very realistic robot with a fairly frail understanding of our human customs, à la Data from Star Trek: The Next Generation, and GOOP is going to suddenly make a lot more sense.