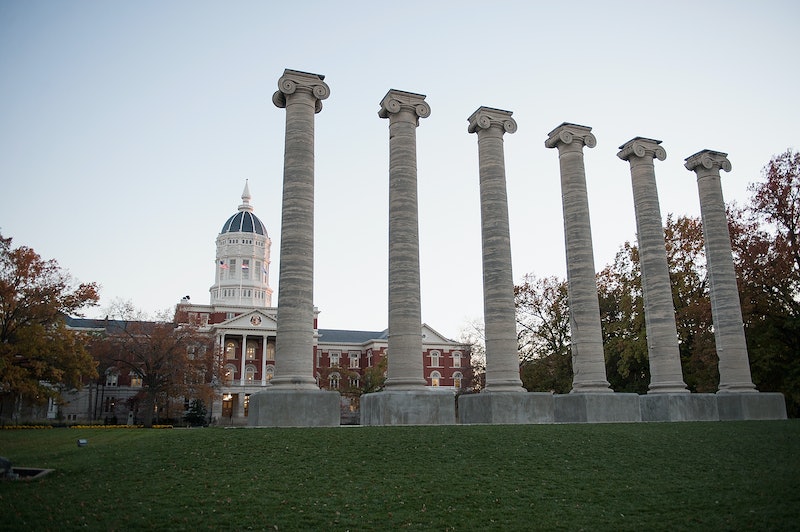 On Tuesday evening, Republican hopefuls gathered in Milwaukee, Wisconsin to debate each other and make the case for why they are best suited to be the next president. One topic absent from the conversation at the fourth Republican debate, though, was this week's controversy at the University of Missouri. The school's president, Tim Wolfe, resigned after being accused of not doing enough to address racial issues on campus. And on Wednesday morning, a suspect was arrested after allegedly posting online threats to African-American members of the university community. So why didn't the GOP debate address the events at Mizzou?

Tuesday's debate was focused on the economic issues facing the United States. But that didn't stop the candidates from bringing up a variety of other topics — Ben Carson even managed to work abortion into his closing statements. If the candidates wanted to bring up this week's events at the University of Missouri, they could have found a way to do so, even if social justice wasn't the focus of the debate. According to NPR, a number of non-economic topics, including Ben Carson's biography, got significant talk time at the debate. Mizzou could have been added to that list, but it wasn't.

Aside from the debate's economic focus, there may be a deeper reason these events weren't part of Tuesday's discussion. The Republican party isn't typically at the forefront of racial justice and social reform movements in America. Carson has decried political correctness in multiple interviews, and his fellow candidate, Donald Trump, has done the same.

Specifically, Carson has spoken out against the Black Lives Matter movement, writing in a USA Today op-ed that the movement is "focused on the wrong targets." For the record, Florida Sen. Marco Rubio, another GOP presidential contender, spoke out in defense of Black Lives Matter in a Fox News interview this past August. "This is a legitimate issue," he said, adding that activists have a First Amendment right to speak out about racial issues. Rubio said that Americans "do need to face" the issue that many African-American males are more likely to interact with law enforcement officials than they are to get a higher education. (In the same Fox News segment, former Hewlett-Packard CEO and GOP presidential hopeful Carly Fiorina said that "black lives have been diminished under Democratic policies.")

Many people considered Rubio the winner of Tuesday's debate, and if any of the GOP candidates brought Mizzou into the discussion, it would likely have been him. In his Fox News appearance in August, Rubio acknowledged that minority Americans, including African-Americans and Hispanics, are often mistreated by the country's criminal justice system. The debate was an opportunity for the GOP candidates to show that they care about social justice in America, but the candidates missed that opportunity.