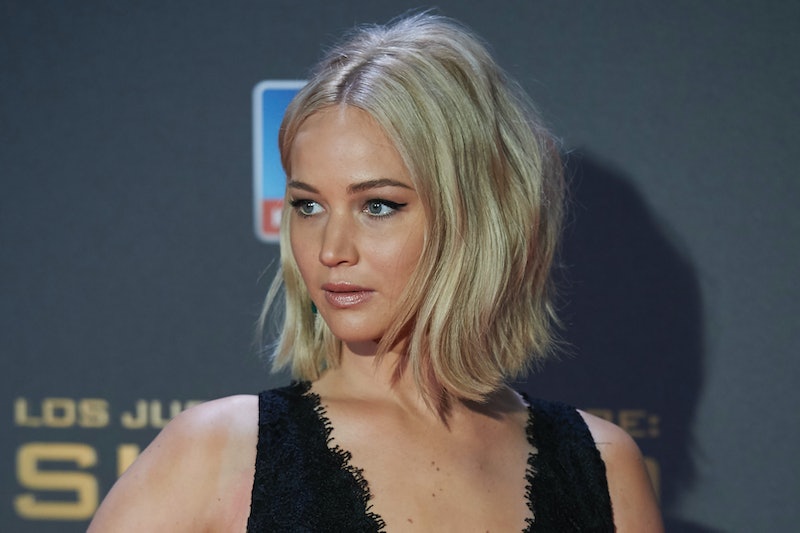 When I think of female actresses that totally deserve every ounce of hype they're given, Jennifer Lawrence has to be at the top of that list. She's charming, down-to-earth, hilarious, bright, and also incredibly talented — who wouldn't love that combination? One of her most amazing qualities is her refusal to be quieted and her insistence in standing up and speaking out for what's right. Last month, Lawrence penned a letter on the gender wage gap in Hollywood that female actresses like herself experience on a daily basis, which was a brave and important thing to do for many reasons. Now it seems like that issue may have played a big part in the reason why Lawrence dropped out of The Rosie Project , an upcoming romantic comedy based on the book of the same name by Graeme Simsion.

According to anonymous sources, Lawrence became frustrated with lengthy pay negotiations associated with the project and backed out. The Hollywood Reporter claims that Lawrence had been locked in negotiations with Sony Pictures chairman Tim Rothman over the rate she'd be paid for The Rosie Project, despite the fact that Lawrence had already agreed to reduce her upfront rate to work with director Richard Linklater on the adaptation. Given that she'd already reportedly taken a massive cut on another Sony production, Passengers, reports claim that she began to "reevaluate her interest" in the movie, before ultimately deciding to abandon it altogether. Linklater exited the project not long after. Bustle reached out to Sony Pictures and to Lawrence's publicist for comment, but have yet to receive a response.

If this is indeed the case, I think we owe Jennifer Lawrence a round of applause for putting her money where her mouth is, so to speak. While it's likely that her paycheck would still equal more than any of us will see in our lifetimes, that's hardly the point. Women deserve to be paid exactly as much as men, particularly when they're in roles that are just as meaty and feature just as much screen time. It's 2015, so how is that not already a thing? Lawrence and others who have spoken out about inequality in Hollywood — from Patricia Arquette to Amanda Seyfried — are fighting the good fight in calling out misogynistic behavior. Without a confirmation, it would be jumping the gun to assume that lesser pay is definitively to blame for Lawrence exiting The Rosie Project, but, if that is indeed the reason we're missing out on her presence in the movie, it's great to see her standing up for what she believes in.

On the bright side, Lawrence is the highest paid actress in Hollywood, and one that's in incredibly high demand, so she'll have no trouble booking roles in the future, which is great. Hopefully, her exit from The Rosie Project, if indeed for these rumored reasons, will illustrate how serious Lawrence is about her approach to the industry and her insistence on being paid for her work. This isn't something that anyone should need to make a point of, but, unfortunately, it is, and, with actresses like Lawrence leading the way, it's hopefully an issue we'll see some serious progress on in the near future.