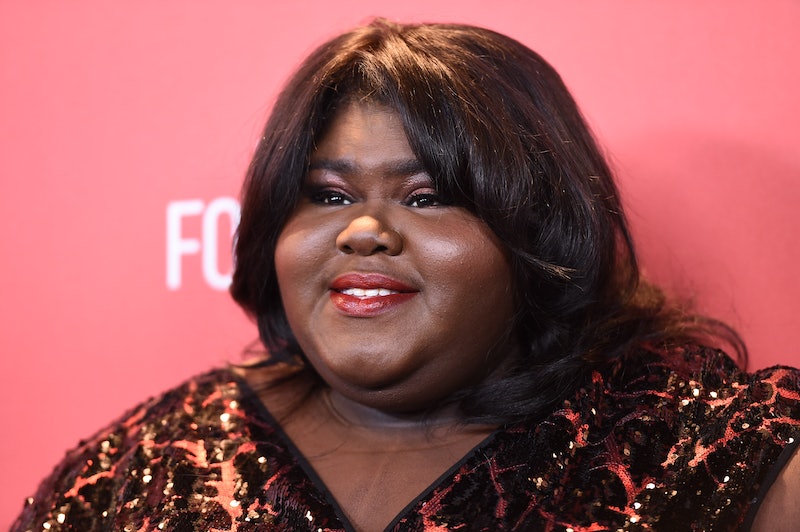 Back in August before Empire returned to the air, the news broke that Gabourey Sidibe's character Becky was getting a love interest in the upcoming season. While news of Gabourey Sidibe's sex scene may have surfaced three months ago to very little buzz, Becky's rooftop moment in the sixth episode of Empire on Nov. 4 sure had people talking. Heck, it even sparked the social media hashtag #MyFatSexStory.

Let me be clear: There's a lot of sex on Empire. Lucious and Cookie. Hakeem and Camilla. Lucious and Anika. Hakeem and Anika. The list goes on. And while some of those moments have been scandalous and intense, there has never been a question as to whether or not those characters should be having sex because of the way they look. From the moment Becky wrapped her leg around J Poppa, however, fat phobia reared its ugly head.

I began to see the droves of memes on social media before I had a chance to watch the episode. They looked just about how they always do when the discussion is about fat women's sexualities. Once I watched the episode a few days later, I saw just how tame the sex scene actually was, but also how no one on the show acted surprised that Becky — a fat black woman — was getting it on with a fit, successful rapper. The show had essentially treated Becky's sexual interaction as something normal (because it is), so the backlash felt purely about society's discomfort and fat phobia.

Most humans can acknowledge that there exists a societal implication that fat women are less deserving of having sex or less likely to be desired. IMO, it's like how confidence is seen by some people as a privilege belonging only to those who fit traditional beauty standards, and it's likely the reason that it's so easy for people to tolerate fat shaming. Fat people aren't "supposed" to be confident, right? And if a fat person does have sex? Well, it "should" only be with another fat person.

Sidibe, like her usual body positive self, has not been silent about these issues. During the episode, she even tweeted, "I've always enjoyed a nicely lit rooftop," and added the hashtag #GettinThatBECKY. The next day, she blogged about the episode for Entertainment Weekly. In the post, she discussed the sex scene and referred to herself as "Fine Ass Becky," just as she tends to do for all of her episode recaps. But what she did at the end of the post was something different. She addressed the backlash.

Just like that, Sidibe shut the shit down. This is one of the things that I love about the actress. She's unafraid of addressing injustices she observes, like the unfair, body shaming treatment that she so often receives, but she does so in a way that isn't victimizing. After all, she's a strong, confident woman, and she knows it.

While Sidibe was penning her own response, fat activists were mobilizing as well. The first person I saw on Instagram defending Sidibe's right to get it called her "Precious," so I completely ignored that response. IMO, it's pretty de-humanizing to call someone by a character's name that they played in 2009. But the next morning, something great happened. Writer Sesali B. started the #MyFatSexStory hashtag on her Twitter.

Sesali shared her own story of falling in love and what role sex played in that picture. In 13 tweets, she presented a narrative that brought visibility to the fact that having sex while being fat (and a woman of color) shouldn't be such a radical idea. What followed was even more women sharing their own experiences.

The tweets weren't just a celebration of sexual freedom, though. They touched on the stigma associated with being fat as a whole. Growing up as fat teens, many of us are so often told that sex isn't for us. We are told that no one will ever want us, thus making sex and desirability a measure of our self worth.

The #MyFatSexStory tweets have brought to light society's fat phobia, and spun it on its head. On Nov. 6, Sesali compiled some of the tweets for a post on Feministing, where she writes as the site's resident "sexpert." On this platform, she expressed why she started #MyFatSexStory and why Sidibe's scene was particularly poignant:

This is a radical scene in today’s media landscape, which barely recognizes the humanity of fat black girls, let alone their sex lives. Popular fat black female characters like Rasputia, Precious, and Madea all reinforce the idea that fat Black women’s sexuality and desirability exist only as comedy, visible only to be ridiculed.

With that quote, Sesali was able to explain why it's such a big deal that a sex scene featuring a fat black female character on one of TV's most popular shows was presented as a normal thing. The thing is, discussions surrounding the discomfort that a scene such as this one can still spark for some people are so necessary. At the end of the day, this whole thing isn't just about a fat woman's right to have sex. It's about her right to humanity.