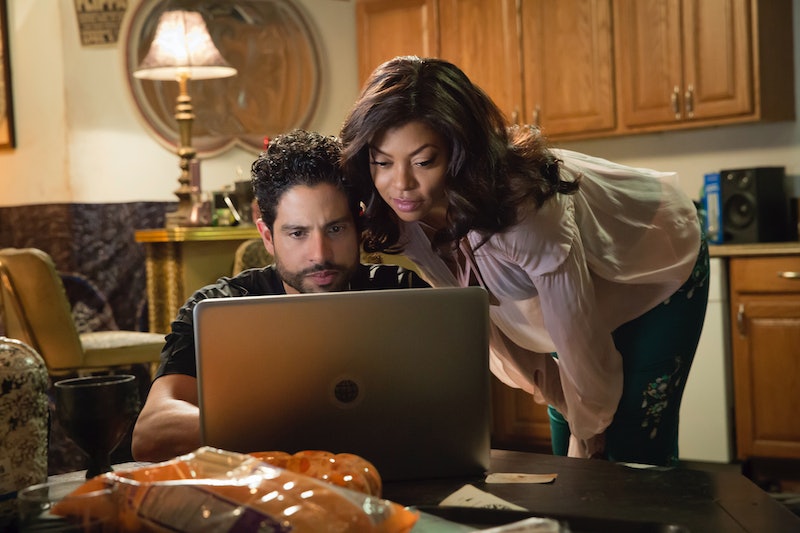 You mess with the bull, you get the horns. Quite literally in this situation. On Empire , Hakeem was kidnapped by some shady men who beat him and then just let him go, but the scars were still there. Then it was revealed that Laz, Lyon Dynasty's new promoter (and Cookie's new man), has the same distinguishing tattoo that Hakeem's kidnappers do. So, one is led to believe that Laz is hiding something from Cookie and might have had something to do with Hakeem's kidnapping.

At first glance, it appears that Laz could be working with the kidnappers in hopes of taking advantage of Lyon Dynasty. But what if that's what we're supposed to think. What if Laz really isn't a bad guy — anymore — and really does have feelings for Cookie and wants to help Lyon Dynasty succeed. Or maybe I'm just giving handsome Adam Rodriguez the benefit of the doubt and he's uber involved in kidnapping Hakeem and turning on Cookie.

So if Laz isn't really a bad guy, then why does he have the kidnapper tattoo? There could be some reasons that explain why he would be branded with the longhorn symbol on his back that don't involve him betraying Cookie.

Laz was a former cop, which could have caused him to go undercover and infiltrate the crew that kidnapped Hakeem. If that's the case, he probably would have had to drink the Kool-Aid and get the tattoo.

He Is A Former Member

Laz might be a former member of the crew, which would explain why he has the tattoo. But, maybe he left that world behind and became a good guy.

What if Laz is just a Texas Longhorns fan and got a huge back tattoo dedicated to the team? It's a bit of a stretch, but I just don't want to believe he's a bad guy.

He Really Is Hiding Something

Then again, it would be a great twist if Laz really was working against Cookie this whole time. But what would he be going after? Lyon Dynasty is still a new company, so maybe this is Laz's way of getting his hands on Empire. We'll have to wait to see what he has planned, but I do know that if he crosses Cookie, she'll show him the horns.

More like this
An Ultimate Guide To The Music Of 'Rap Sh!t'
By Brad Witter
Does The 'Echoes' Ending Mean There Will Be A Season 2?
By Kadin Burnett
Here’s How 'House Of The Dragon' Diverges From The Book’s Timeline
By Allyson Johnson
The 'House Of The Dragon' Showrunners Revealed One Key Similarity With 'GoT'
By Grace Wehniainen and Kadin Burnett
Get Even More From Bustle — Sign Up For The Newsletter