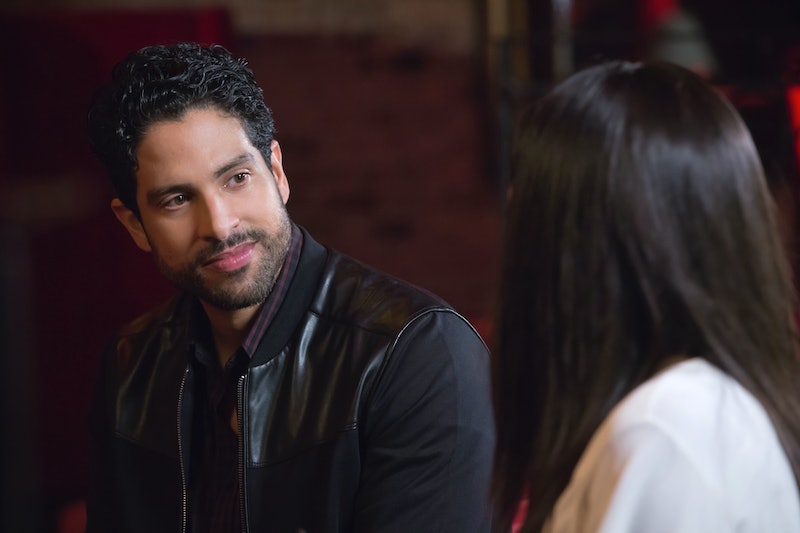 He may be handsome, but let us all understand that Laz is up to no good on Empire . After coming down from the emotional roller coaster that is Hakeem Lyon's abduction, we hop right back on a roller coaster of love, featuring Cookie and Laz, played by Adam Rodriguez. But this is one of those roller coasters where just when you think it's over, it drops you hundreds of feet — just for one last thrill. In "A High Hope For A Low Heaven," it appears as if Laz was involved in Hakeem's abduction, and Cookie has no idea that she is quite literally sleeping with the enemy.

During Hakeem's abduction, we learned that the goons that took him all have the same longhorn branded on their backs. No, they're not cowboys, even though Hakeem asked them that. Instead, it seems to be some type of a marker for their crew. Fast forward to the final moments of the episode, when Cookie and Laz are getting busy — which was only a matter of time, right? — and Laz takes his shirt off (bless) and it is revealed that he also has the longhorn branding on his back.

Earlier in the episode, Laz tried to convince Cookie to hire the men that abducted Hakeem as security. If she pays them to be on her side, she won't have to worry about them coming after her. So, what is Laz's angle? Is he trying to get his crew on Cookie's payroll? He didn't push Cookie too much after she said she wanted nothing to do with those men or the cops, which Laz also used to work for.

So maybe Laz isn't actually part of this crew that abducted Hakeem. Maybe, while he was a cop, he had to go undercover. That could explain why he has the branding. Then again, if Laz was involved in something shady on the side while being a cop, it could explain why he's now a promoter.

All I know is Cookie does not need a scrub like Laz to come in and screw everything up — especially when that involves possibly hurting Hakeem. Mama Lyon will protect her cubs, and she'll take anyone down in the process of doing so. If Laz is working for the other side, he better get out now or hope Cookie doesn't find out. Meanwhile, I'm judging him hardcore.