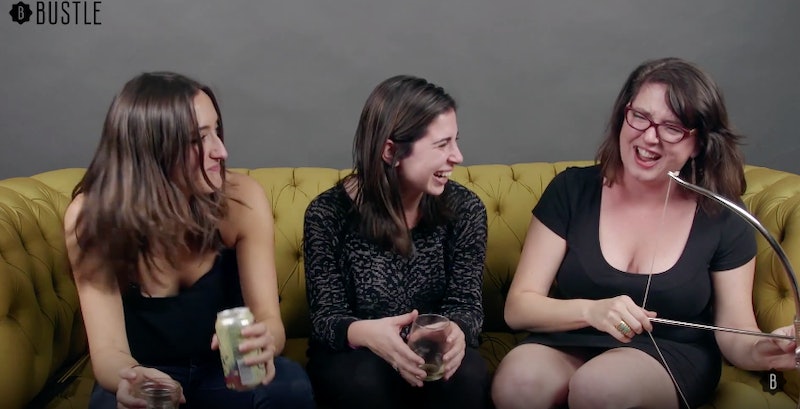 It's been a long, dystopic, and, let's face it, pretty depressing journey for fans of The Hunger Games. It all comes to an end (for now) when Katniss Everdeen and company return to theaters in Mockingjay, Part 2 on Nov. 20. This trend of splitting novels up into two movies that are then separated by a lengthy filming and promotional period is pretty taxing on the ol' memory. What exactly happened in Mockingjay, Part 1 ? Where did the movie leave the Second Rebellion of Panem? Where's Katniss on her decision to pick Gale, Peeta, or just being simply being left alone with a hot bath? Did I dream it, or was there something to do with a cat somewhere in there? Well, these Bustle editors took on the challenge of recapping all the Mockingjay action so far, though they did insist they split a few magnum bottles of wine before they did it.

But first, a pre-refresher refresher: In Catching Fire, Peeta and Katniss's victory tour is interrupted when they are sent back into the arena for the Quarter Quell by President Snow. They find friends and enemies among the other past victors, and then Katniss spits in the Capitol's Cheerios yet again when she shoots an electrified arrow into the center of the arena's force field and takes out all the power. She wakes up to find out that District 13 isn't actually destroyed; it was just laying low as the headquarters of the next rebellion. President Coin and Plutarch Heavensbee (a double agent!) want her to be the rebellion's one-woman PR department. Katniss just wants to get Peeta back from the clutches of the Capitol and make sure her family is safe. The other districts are in chaos; Snow is lashing out in fear; and Effie is bereft without her walk-in closet.

And now, I'd like to let my boozy colleagues take it from here.

Get Ready For Fake Selfies

And Plenty Of Feels

And Some Oscar-Worthy Reenactments

Basically, Get Ready For One Last Round With The Girl On Fire