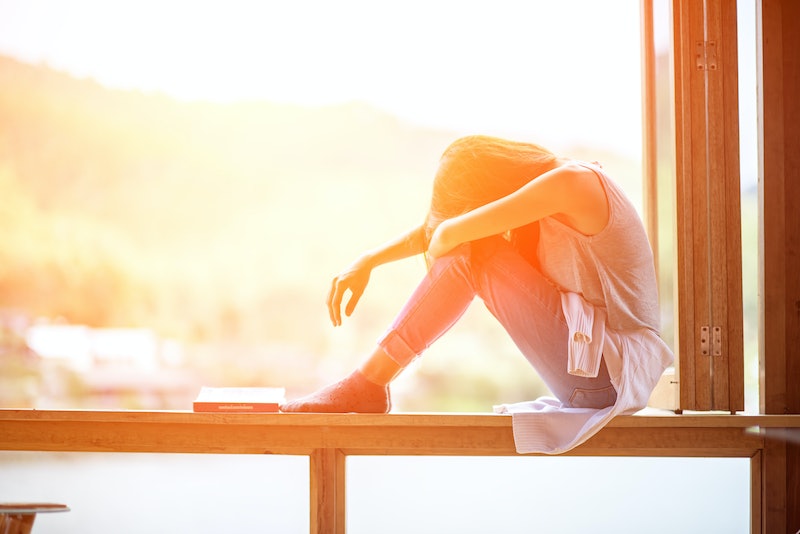 If you've been having periods for any amount of time, you've probably already had a run-in with a period blood clot. If you don't know what I'm talking about, well, lucky you. Please allow me to draw you a word picture: Period blood clots are thick, jelly-like, bright or dark red blobs of what I'd describe as "chunky blood." They can pop up on our pads or tampons, or otherwise be expelled during our heaviest flows, and it's hard to not get freaked out when you see one. After all, isn't blood supposed to be, you know ... not chunky?

But while period clots look like vitally important parts of our internal organs that just happen to be falling out of our vaginas, you shouldn't freak out if you see them— they're just blood. Typically, blood clots occur when your period is quite heavy; when the blood pools for a prolonged period of time, it begins to coagulate (the same way blood pooling on a cut on your finger will turn into a scab). According to the CDC, period blood clots smaller than a quarter are normal and no cause for concern. Most of us get them from time to time.

"Blood clots — depending on the size, frequency and accompany cramping/pain — can be normal," Dr. Jane van Dis, MD, an OB/GYN and medical director of the Maven Clinic, tells Bustle. But they can also indicate hormonal or other issues.

If you're experiencing blood clots and enormously heavy flow every time you get your period, talk with your doctor; they may want to check you for several potential health issues — including one of the five below.

Uterine fibroids are benign tumors that grow inside the (you guessed it!) uterus. But the fact that they're benign doesn't mean that they are always chill — though most women with uterine fibroids don't experience any negative symptoms from them, they can cause physical pain (including in the abdomen and during sexual activity), pressure on the bladder, and long, heavy periods (often with many blood clots).

Polyps — small, soft growths on the uterine lining that can become malignant in some cases — can also lead to clots in your period, as well as heavy period, bleeding between periods, and irregular periods.

If either of these sound like you, take yourself and your ute to a doctor who can check to see if you have fibroids, and then discuss your options.

In certain cases, people may respond to hormonal birth control or some non-hormonal birth control (like the copper IUD) by developing the disorder menorrhagia. The primary symptom is a period that lasts longer than seven days, has an abnormally heavy flow (i.e. you have to change pads or tampons every two hours or so), or involves passing large blood clots.

If your ultra-heavy and clot-filled flow showed up right around the time you started using a new form of birth control, have a chat about it with your doctor.

According to the Mayo Clinic, 10 to 20 percent of known pregnancies end in miscarriage. But the actual number of people miscarrying is likely much higher, because if you are not aware that you're pregnant and miscarry early on, it may simply look like a very heavy flow.

So don't assume that a suddenly-heavy flow means you're miscarrying — because that can also lead to overlooking other health issues. "You wouldn't want to miss a fibroid, polyp or precancerous lesion on the cervix because you've attributed your increased flow to the possibility of unknown miscarriage."

"Sometimes precancerous or cancerous lesions of the uterus and cervix can cause increased blood flow and clots," notes van Dis. Periods that have become longer and heavier, and abnormal vaginal bleeding, can be signs of cervical cancer, according to the American Cancer Society. "Most often, increased bleeding with clots is benign," says van Dis, "but you can't know for certain until you see your OB/GYN, so be sure to make an appointment if the bleeding is new, heavy and concerning to you."

"Rare causes of blood clots are bleeding disorders, such as von Willebrand disease," notes van Dis. These disorders are generally hereditary, and might involve other symptoms such as frequent bruising and nosebleeds. Luckily, they can be controlled by medication.

"The bottom line," says van Dis, is "if there's been a significant change in your menstrual bleeding and it includes new clots, it's a good idea to see an OB/GYN to have a full checkup." She recommends preparing for your visit by keeping a "bleeding diary," where you "jot down which days you bled, how much you bled (how many tampons, pads, or menstrual cup-fulls of blood you saw) and whether there were any accompanying symptoms like dizziness, cramping or abdominal pain."

The main lesson to remember? Blood clots may be unpleasant to look at, but you shouldn't ignore them; those little suckers may be trying to tell you something.

This post was originally published on November 11, 2015. It was updated on July 2, 2019. Additional reporting by Syeda Saad.

This article was originally published on November 11, 2015