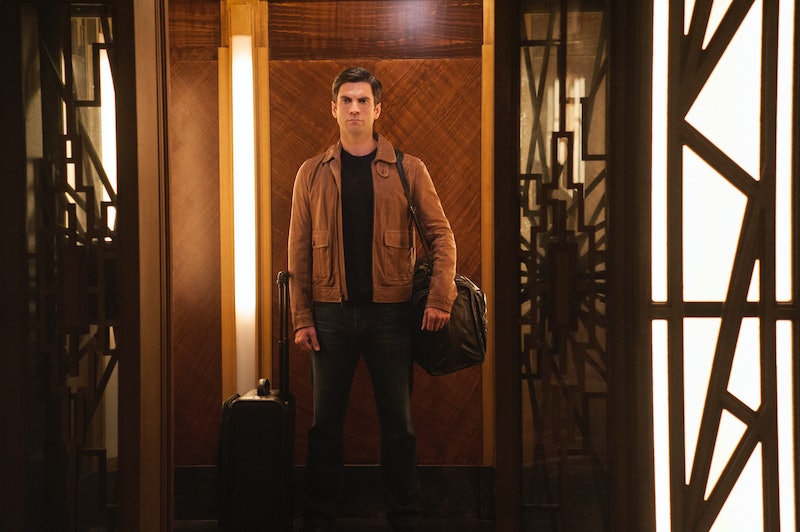 By now we all know that American Horror Story: Hotel has vampires, serial killers, and ghosts — oh my! — but it's hard to say why exactly they're all sharing the same hotel. The Hotel Cortez was founded as a murder playground, but now is the home of a collection of vampires and ghosts and happens to be haunted by the hotel's original owner, and there's apparently something that needs to be "fed" in Room 33. Basically there's a lot going on. So, what exactly are the rules of the Hotel Cortez?

By rules, I'm not talking about rules like, "Please leave dirty towels on the floor and hang up and towels you're not finished with." I'm talking about rules like, "Make sure the vampire children are tended to" or they might start a feeding frenzy on innocent bystanders (and dogs... R.I.P. Scarlett's pet). The hotel does not have an official list of rules on how to stay alive, but there have been hints of rules that should be followed, as well as actions that have lead to the demise of the characters in the Hotel Cortez that are best avoided. Here are my guesses to what the best practices are at the Hotel Cortez.

1. Don't Have An Addiction

The Hotel Cortez is a bad place to give in to your addiction. Whether you are satisfying your heroin addiction, pursuing the criminal case that you can't seem to get out of your head, or desperately trying to quench your thirst for murder — Your addiction will likely be your undoing in the Hotel Cortez. Don't end up like Gabriel — avoid addiction and avoid the Addiction Demon.

In the first episode, Iris said something about feeding whatever is in Room 33 and the audience is waiting to find out what it is. but it's implied that it has to be fed or else something bad will happen. This seems to be the only clearly stated rule of the Hotel Cortez so far.

This is a pretty good rule for life in general, but your chances of dying increase dramatically if you decide that your time in the Hotel Cortez is best spent being mean to someone else. The two buisnessmen who mocked Liz Taylor for her wardrobe? Dead. The two entitled hipsters who berated Iris? Dead. There's a good chance you will still die if you enter the Hotel Cortez, but being as nice as possible won't hurt your chances.

4. If You Do Die In The Hotel Cortez, Take Someone Else Down With You

Dying is probably awful, but the pain of death is probably lessened by being able to come back as a ghost — let alone a ghost that can still have sex with attractive, emotional detectives! It's not clear what allows someone to come back as a ghost on the Hotel Cortez property, apparently you have to have "unfinished business." But odds are if you've been responsible for someone else's death while inside the Hotel Cortez then you got a fastpass to ghosthood. Mr. March and Hazel Evers were responsible for a great many deaths, and Sally helped Donovan overdose before getting pushed out of a Cortez window. The more bodies under your belt, the better your chances!

There's doesn't seem to be a lot of structure to the rules of the Hotel Cortez, much like the ghost rules are pretty loose this season. However, aside from mentions of the thing that needs feeding in Room 33, there are a noticeable set of patterns that come with punishment (death) or reward (rebirth). It looks like if you stay of healthy body and mind and remain kind to those you pass, bad things might not happen to you in the Hotel Cortez! Well... They probably still will, but at least you'll die as a good person, which is something!