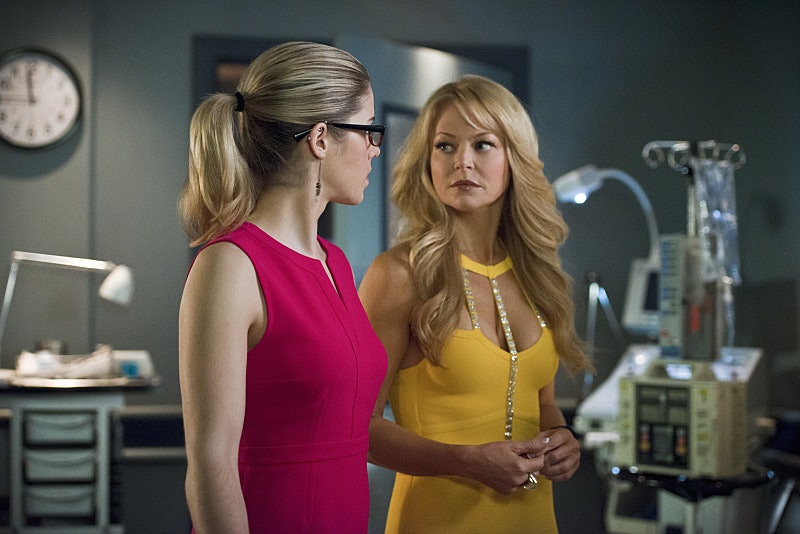 I don't typically like to get attached to reoccurring characters because they never really tend to stay, but the second Donna Smoak appeared on my screen, I, like countless others, fell madly in love. In fact, this new Arrow clip of Donna and Felicity Smoak is everything. Sure, her carefree contrast to the much more grounded Felicity is hilarious, but it's more than just the laughs she can garner that make this peripheral character work so well. Without a shadow of a doubt, Donna Smoak is Arrow's most intuitive character. Because, let's be real here guys, while we love them, Star City's permanent residents can be so very dense.

I know, I know. Felicity's mother may not initially seem to be the sharpest tool in Star City's shed, either. I mean, when we meet her, she can hardly work a smart phone. But, smarts aren't simply about coding and college and business running. Mama Smoak has common sense. Mama Smoak has emotional intelligence. More so than that, Mama Smoak is seemingly omniscient, in that she is the literal representation of the audience.

How so? Well, when Donna squeals over a situation, we usually are, too. And, when we want to shake some sense into our faves, *cough* Olicity *cough* she does it for us, figuratively of course. I mean, do l even need to bring up the time she told Felicity she wasn't in love with Ray because she was in love with Oliver, before she really even admitted it to herself? Yeah, no, I probably don't, but I will anyway. It was a glorious and gratifying moment, for all of our frustrated Season 3-watching souls.

So, with this in mind, it's especially comforting to know when she's in an episode, as she is this Wednesday. It gives us fans reassurance that Olicity won't go unchecked in whatever shenanigans may be going on, because Mama Smoak will be there, checking them for us and enlightening them when they'd otherwise be in the dark. As evidenced in the clip below, her intuition comes into play in a major way as she smartly leaves Olicity to their devices.

Also, I think she may be an oddly prophetic character as well. The "make up sex" quip? I'm, uh, keeping my eyes peeled for that...