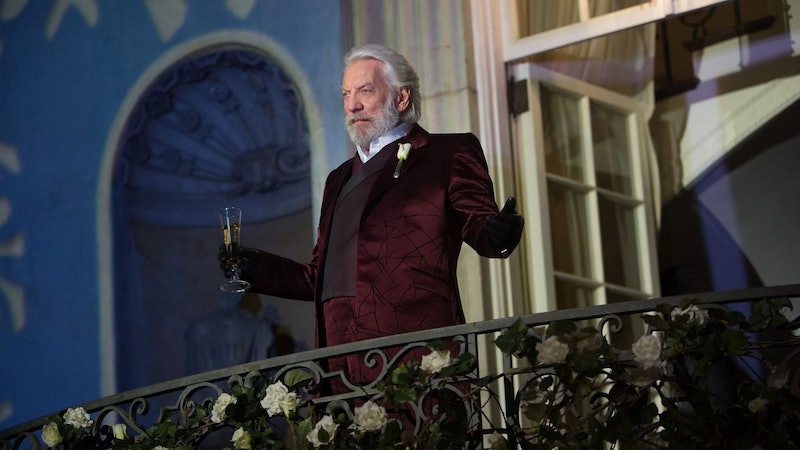 From the moment President Snow truly gets to know Katniss Everdeen in The Hunger Games series, it's obvious that he's terrified of her. Snow acts like he wields all the power in Panem, but he goes to incredible lengths just to make an example of one young woman. He's scared, and terrifyingly violent because of it. The feeling is mutual, though; Snow gives Katniss a sick feeling every time she's in his presence. His signature boutonniere and low, honeyed voice could be grandfatherly if matters were different. But they aren't, and so President Snow is out to crush Katniss and all of her friends. Thankfully (spoiler!), the leader meets his end in the series. How does Snow die in Mockingjay, Part 2 , you ask? Well, it depends on whether the movie will make the choice that the book didn't.

Mockingjay, Part 1 ends with the terrible revelation that President Snow allowed the Peeta rescue mission led by Gale and others to succeed on purpose. Peeta's personality has been hijacked by exhaustive brain-washing sessions, and the first thing he does when he wakes up in District 13 is to try to throttle Katniss. Snow has always played the psychological game as well as he wages war; I imagine that he hoped to further discourage Katniss and the rest of the rebels to show them one of their own so broken. Yet she isn't so easily convinced; in this clip from Mockingjay, Part 2, Katniss voices her intentions to Johanna Mason, saying she sees President Snow as the biggest obstacle between Panem and anything "good."

In the Suzanne Collins novel, the stakes rise as the rebels move closer to and eventually maneuver within the Capitol. Katniss continues to lose friends. But the worst blow comes when an aerial attack targets a group of children and a second pass wipes out the medical teams who've been dispatched to help, including Katniss's sister Prim. When the Capitol has been taken and Snow is finally brought to his knees, he tells Katniss something that clicks with her growing disillusionment with her commander. President Coin ordered those attacks, he explains from his prison cell. "We both know that I'm capable of killing children, but I'm not wasteful," Snow says. "I take life for very specific reasons." Coin's rebellion benefited from the attack, and Katniss realizes she's helping to create a new oppressive regime in place of another.

President Snow is sentenced to be executed, and Katniss is meant to be his executioner. But instead of driving an arrow through his heart, she aims it at President Coin and fires. "In the stunned reaction that follows," Katniss narrates. "I‘m aware of one sound. Snow's laughter. An awful gurgling cackle accompanied by an eruption of foamy blood when the coughing begins." The shock causes a panic among the audience who came to watch Snow killed, and they riot, causing his actual death. In the end, Katniss, and therefore the reader, have no idea whether Snow was crushed or if he choked on the blood from the ever-present sores inside his mouth. (Lovely!) In my opinion, it's a fittingly insignificant death. There's no dignity in it, except that his promise to always tell Katniss the truth headed off another dictator at the pass. I think I prefer the idea that he was trampled by the same people he held down for so long. I prefer it a lot.

Will Mockingjay, Part 2 actually show Snow's moment of death? If the movie decides to be explicit about the ultimate cause, it will be a deviation from the novel. Still, it's difficult to resist giving the audience the satisfaction of seeing President Snow get what he deserves.