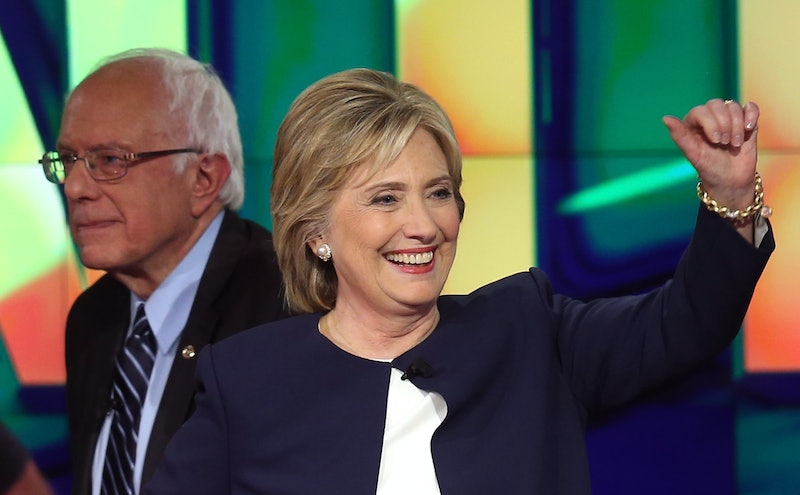 They're at the top of the pack — albeit a small and shrinking pack. But Hillary Clinton and Bernie Sanders are very different Democratic candidates. On many general issues, the two have a lot in common. They're both pro-immigration, workers, women, minorities, and students. Though Sanders defines himself as a democratic socialist, both align with the Democratic party on a number of fundamental issues and have shown this in the past. But Clinton and Sanders differ on some crucial issues that are bound to play a role in nearly every American's life during the next presidential term. So, choose carefully, primary voters.

They come from very different backgrounds. Sanders worked his way up the ladder of local politics, first as mayor of Burlington, Vermont, and eventually as senator for the state. Clinton, on the opposite side of the spectrum, entered the political sphere as first lady, then as a senator of New York and then secretary of state. Since both have served as senators, it's particularly useful to look at each candidate's voting record to understand the nuances of their views. On political philosophy alone, Sanders is more left-wing and socially progressive than Clinton, who is generally viewed as a more centrist moderate. When you take a close look at their respective stances on a couple of hot-button issues in the 2016 race, their differences define these candidates as very different people.

Clinton: She's been staunchly pro-gun control for many years. She wrote in her memoir Hard Choices that Columbine inspired her to run for Congress. "We have to rein in what has become almost an article of faith, that anybody can own a gun anywhere, anytime," she said at the National Council for Behavioural Health conference in 2014. While Clinton supported legislation that would allow victims of shootings to sue manufacturers, Sanders opposed it.

Sanders: As a Vermont representative for nearly 20 years, Sanders has always had rural concerns in mind when it has come to gun control. That's why mainstream Democrats question his record on guns. But it's really not that radical: He thinks states should regulate gun sales, but wants to ban assault weapons and close the gun show loophole. What he says must be working, because, according to FeeltheBern.org, while Vermont is the most gun-friendly state, it has the lowest rates of gun violence.

Clinton: Foreign policy is possibly the biggest difference between these two candidates. Clinton has been described by some liberals as a "war hawk." She's shown a willingness to use U.S. troops to combat terrorism and fight ISIS. She supported the Iraq War, although later regretted her vote and said she made a mistake, Politico reports. She has said she wished the U.S. had done more to arm Syrian rebels and defeat Al Qaeda in Pakistan.

Sanders: He has a strong anti-war record. Sanders voted against the Iraq War, wanted to demilitarize Afghanistan quickly, and in general is against foreign entanglements. He's opposed to the U.S. taking a stronger role in the fight against ISIS. "I'll be damned if kids in the state of Vermont — or taxpayers in the state of Vermont — have to defend the royal Saudi family, which is worth hundreds of billions of dollars," he said on CNN in 2014 when asked his opinion on the U.S. collaboration with Middle Eastern nations to airstrike against ISIS.

Clinton: Clinton has supported much legislation to limit CO2 emissions and promote renewable energy. Her 2015 plan to turn the U.S. into a clean energy superpower was lauded by environmentalists, though some, including climate scientist Michael Mann, who directs the Penn State Earth System Science Center, believe she is too lenient on companies that release tons of fossil fuels.

Sanders: In 2015, Climate Hawks Vote, an environmental super PAC, named Sanders the No. 1 Senate leader on issues related to climate change. He and Sen. Barbara Boxer introduced the Climate Protection Act in 2013. Unlike Clinton, he is opposed to trade agreements that might allow major polluting companies to continue to emit greenhouse gases.

Clinton: On this issue, Clinton wants to empower states. She proposed $17.5 billion in grants to individual states to invest in higher education and wants to lower student loan interest rates. She's also opposed to the current debt-repayment system, in which the federal government makes a profit off student loans through large interest rates.

Sanders: He has some lofty dreams for students. Sanders wants to make all public universities tuition-free for students. “We live in a highly-competitive global economy and, if our economy is to be strong, we need the best-educated work force in the world," Sanders said. Like Clinton, Sanders doesn't think the federal government should be profiting from student loans.

Clinton: She wants to leave Obamacare in place and expand it to further lower costs for patients. In Clinton's view, out-of-pocket fees for medications should be capped at $250, according to Business Insider. She also thinks the government should negotiate with pharmaceutical companies to lower the prices of drugs.

Sanders: He voted for the Affordable Care Act, but thinks it should be replaced with a single-payer system, a model in which one public agency handles all medical finances, to provide universal health care to all individuals. He wants the U.S. to move in the direction of countries like Denmark, which provides a universal system to its citizens.