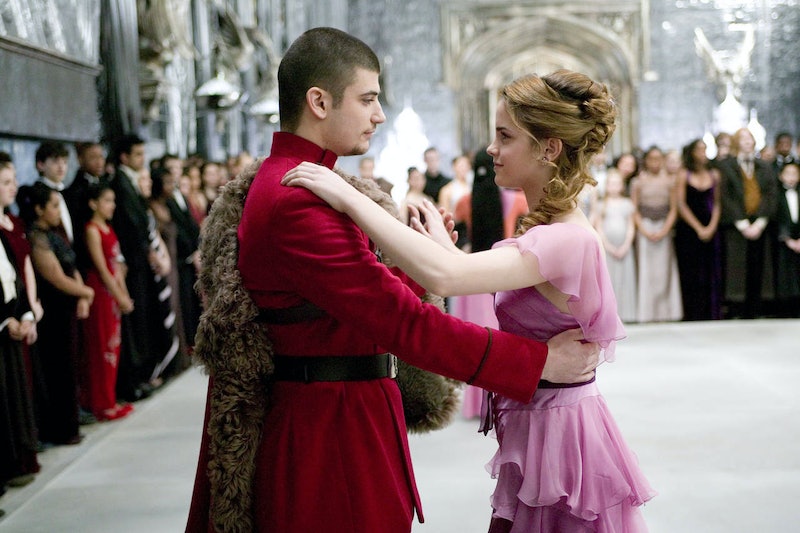 School dances were always an epic occasion that required plenty of planning and preparation, but what we did before winter formal in the early 2000s was on a whole different level. Something about the festive time of year made us all put way more effort into planning for winter formal than any other school dance. It was also a particularly exciting dance, because the coming of winter formal also usually meant the coming of winter vacation. Everyone was simply too exhilarated to contain themselves.

At my all-girls high school in the early 2000s, winter formal was a time to bust out all things red, glittery, and furry. We hit the mall like wild animals, hunting desperately for our Jessica McClintock gowns and metallic Baker's heels. Basically, our main goal was to look as though Santa Claus married a snow princess and had a glittery baby, and most of the time, our goal was achieved. To this day, we still find flecks of glitter on our bodies: A reminder of what winter formal once was. We were chilly, we were possibly coming down with the flu, but most of all, we were fabulous. Here's what all early 2000s girls did before their winter formals.

Face it: As teenagers, we were all a little too on-the-nose. Silver, white, and red were the chosen winter formal colors, particularly if you could find satin elbow-length gloves to match. No matter the fact that you looked like a Christmas ornament — because it's winter formal, damn it — there was no time for high drama like the present.

2. And Some Shiny Shoes To Go With It

What would a silver, white, or red dress be without a pair of metallic pumps to go with it? At my high school, all the ladies had some version of this shoe, and we all felt on top of the world while wearing them.

3. Realized Those Shoes Were Completely Inappropriate For The Weather

Until, of course, it was time to go outside. December in Cleveland, Ohio meant there was probably some kind of snowy muck on the ground, and it simply wasn't conducive to our shiny-shoed efforts. Against the vocal wishes of many mothers (who claimed they couldn't believe we were ruining our $30 Famous Footwear finds), we wore them anyway. It was cold.

4. Got Ourselves A Serious Up-do

What would a winter formal be without a Mega Serious Up-do, jam-packed with so many bobby pins and hairspray that it felt like we weren't even wearing our own heads? We all went to the salon with visions of having the most unusual hairstyle of our friends, only to realize we'd all ordered exactly the same thing.

5. Picked Out Our Tiaras

Unlike homecoming or spring formals, there was just something about winter formal that screamed "wear a fu*king tiara." Maybe the holiday cheer surrounding the event made us feel fancier than normal, or maybe the tiaras were on a pre-holiday discount at Claire's. Either way, we wore them and loved them.

6. Used Glitter, And Lots Of It

I am still removing glitter bits from Winter Formal 2002, and I don't even regret it. Your body, your hair, your face, your eyes: There was nothing we left un-glittered for a winter formal dance.

7. Tried In Vain To Get Our Tattoo Gems To Stay On

Remember those? Someone somewhere made a lot of money off of these bad boys, and they never managed to stay on for more than an hour. Shoutout to all the girls who convinced their parents to let them wear one on their collarbones — and all the girls who sneakily put them on their hips.

8. Argued With Our Parents About Wearing A Coat

"No mom, I'm not going to ruin this winter formal aesthetic with my Land's End parka. Don't you GET IT?!" The only way your parent could get you out of the house in outerwear was if they were nice enough to purchase you a fur stole. Otherwise, winter formal was simply a good enough reason to contract pneumonia.

9. Complained About The School's Cheesy Decorations

I remember my friends and I complaining about the decorations at the dance: They were too cheesy, too on-theme, or too cheap-looking. In reality, though, we all loved them. And we adored the fact that winter formal was basically a giant Christmas party, wherein we got to dress up like beautiful snow queens and dance with our dates, whom we forced into wearing complementary ties.

For me, all these things prove that winter formal was the absolute best — even if I am still removing glitter from my nipples 12 years later.