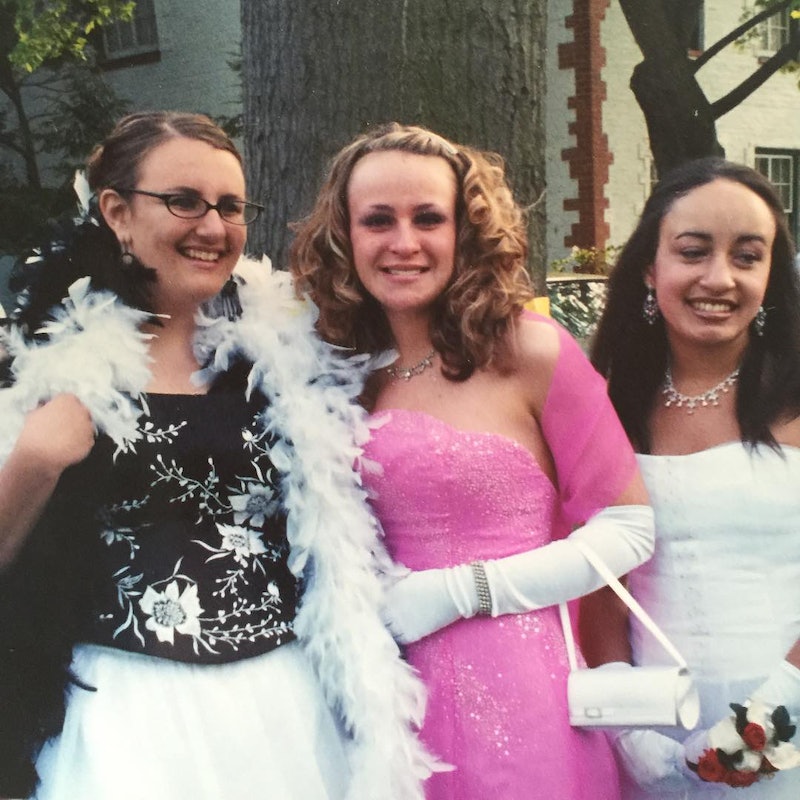 I graduated from high school in 2003, which means I spent my high school career deeply mired in the horror show of turn-of-the-millennium fashion. What we wore to homecoming in the early 2000s was probably the worst of it. Although, to be fair, what we wore on the first day of school was usually a complete trainwreck as well.

The sartorial choices at my own homecoming were made all the more exciting by the fact that I went to an all-girls Catholic high school. We normally wore uniforms, so dances and other events were the only chances we ever really had to show off our style. Half of us went to homecoming with then-closeted gays from the fellow boys school, and the other half showed up with our entirely-too-old boyfriends who lived in nicotine-stained studios in sad suburbs of Cleveland. The dance itself was uneventful (except for the couple that got into a fight and ruined the beautiful moment created by K-Ci & JoJo), and most of us just went through the motions until it was time to get wasted on approximately three Miller Lites (bought for us by the aforementioned entirely-too-old boyfriends).

It was truly the best and worst of times, most of which I'm glad to forget. However, one thing that I hope remains is memories of our school dance fashions. Let them live on in our hearts — but definitely not on our bodies — forever.

Basically, these were the epitome of early 2000s chic. Simply roll sections of your hair into sausages, clip them off with a butterfly, and bam: You're perfect, you're fashionable, and in your mind, you've won Miss Teen USA 2002.

Admit it: You probably never really wanted to use this stuff, but felt peer pressured into doing so because everyone else was. Never mind the fact that your hair immediately turned to the consistency of a 2x4, or that glitter was stuck to your scalp for weeks. For one special night, you were a queen.

Either you had one, you wanted one, or you simply couldn't decide which of your three to wear. Eventually, you'd go for the one with the sherbet sheen, because that's the only real way to make an entrance. The now-defunct brand served us well while it was around, and I'm just sad that my own daughter won't get to hem and haw about whether or not to wear gloves with her McClintock.

Because what would a teen décolletage be without a whisper of a gem to adorn it? Also, remember how much fun it was to find these after you'd haphazardly thrown them in your drawer? If you're feeling extra nostalgic, you can still find these babies on the Internet, like this one available on Etsy for just $12. It might be time to bring it back.

Tonight is your night, and the thing that everyone will notice the most is the intensity of the glitter airbrushing on your nails. Bonus points if you added a dolphin or two.

Either you paid a lot of money to get them done, or your friend did them with a little bleach and Manic Panic. Homecoming was a perfect night to show them off. When your chunky highlights were in an up-do, they looked like a Neopolitan swirl ice cream cone — and you looked totally fabulous.

There is one particular style that was hot in the early 2000s, and I refer to it as "Two Pieces." In other words: You put the entirety of your hair up in a curly 'do, add a tiara or gems, and then tell the hairdresser to pull two soft, perfectly curled tendrils down in the front. Ladies and gentlemen: Two Pieces.

Because us girls didn't have all the fun. I remember plenty of homecoming dates doing something splashy for the big dance. I wonder how these guys feel about these outfits today.

You might've felt uncomfortable, your posture might've been awkward, and you may have had no idea how to interact with your date. Once you added those white gloves, though, it was instant elegance.

Crop tops are hot right now, but they were also killing the game in the early 2000s. Only back then, you paired them with a long shiny skirt instead of a pair of cutoffs. Remember how scandalized your grandparents were about this?