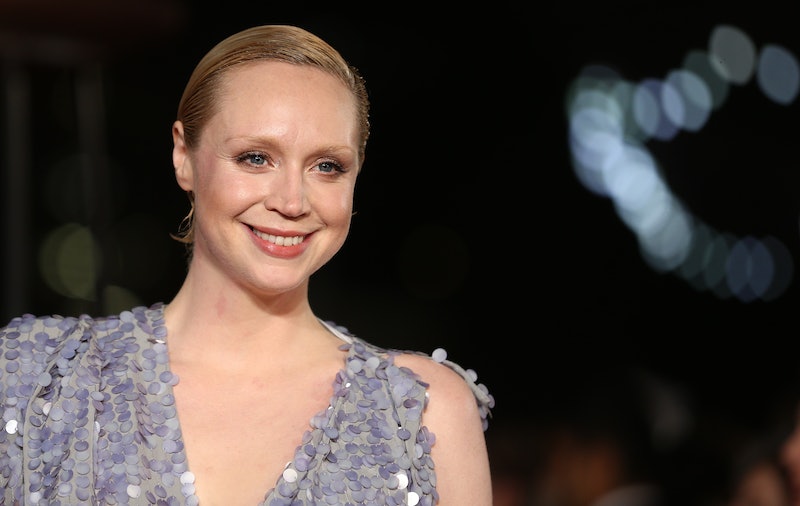 With roles in The Hunger Games: Mockingjay — Part 2 and Star Wars: The Force Awakens, Gwendoline Christie is well on her way to becoming one of 2015's biggest box office draws. Even better, she's going to do it while playing two strong female characters: Commander Lyme, a former District 2 winner of the Hunger Games and Captain Phasma, a member of the First Order, which has become known as the evil new version of the Empire. Christie, known for playing Game of Thrones warrior Brienne of Tarth, has made a career out of playing women that are as strong, if not stronger, than the men she's been sent to destroy. Even better, Christie has quickly become an unapologetic action hero for women and young girls who truly believe that anything boys can do, girls can do better.

Christie has only eight acting credits to her name since 2007, but she's quickly become the go-to woman for sci fi/fantasy directors who are looking for someone who doesn't mind getting a little rough. Force Awakens director J.J. Abrams told Entertainment Weekly that the character of Phasma was specifically created with her in mind. “I just thought it would be really cool if we could find someone to play the part who was female, and I’m a fan of Game of Thrones; Gwendoline is in that show, [The Force Awakens casting director] Nina Gold casts it, she knew Gwendoline, obviously," Abrams said. "We were very lucky to get to have her in the movie. She’s not in many scenes, but her presence is powerfully felt when she’s there.”

And that's the power of Christie. There is no role that is too small for the statuesque British actress. She's a force — no pun intended — to be reckoned with. The former gymnast, who turned to acting after hurting her back, seems like a natural with a sword or taking on big burly men. You believe that she would have no problem laying these guys out — and, up until now, all of her foes have been men. A lot of that power comes from her androgynous nature on screen, something that's pretty revolutionary for female action heroes and that we haven't seen much of since Brigitte Nielsen or Grace Jones. Christie told V Magazine that when you are nearly six feet tall when you're 14 years old, you need to decide what you're going to do with that power.

Her decision to subdue some of her femininity, opting to focus instead on her physical strength, is what has made her characters so interesting. At Comic Con's Women Who Kick Ass panel this summer, Christie said her stature has also given her the opportunity to have complicated relationships with her male counterparts on Game of Thrones without sex ever being involved.

In a mainstream TV show, we got to see this very unique, very unconventional woman enduring abuse from a man, and then the power lay in the fact that that got turned on its head, to develop a grudging respect for each other that’s intense and close and doesn’t have its roots in sexuality,” she said. “And I was thrilled to see that at last, and I thought it was a very powerful, modern representation of women.

Unlike other actresses who take on action roles, no one is talking about Christie's looks or sexuality. At least not when she's onscreen. Off is a different story, with magazines commenting often on her model good looks and impeccable style. But, onscreen, her character's costumes are all-consuming, revealing little skin, specifically any that could be deemed inappropriate. With Phasma's chrome-plated trooper suit, it's hard to distinguish that she's even a woman, which is interesting for a film series in which one if its most memorable scenes involves a chained-up woman in a gold bikini.

Christie was also excited by the idea that she was allowed to disappear into her armor. “I found it exciting that there was a female storm trooper, but it was also this opportunity to explore a female character that’s totally not about the way she looks.” Christie said at Comic Con. “I just thought it was exciting that underneath that armor was a woman.”

What's more exciting is that Christie's managed to make a name for herself playing these types of women: women that rarely exist onscreen, but somehow Christie will have played three of these types in 2015. This niche she's carved out for herself should put her in the position to become the next big female action star. She should be able to get the chances Chris Pratt has been given since starring in Guardians of the Galaxy, to earn her own movie — heck, maybe even a Marvel one. What's better is that Christie seems totally game to be the female superhero we've all been waiting for, getting OMG excited about realizing Phasma has her own Christmas ornament.

"I can’t help but feel like the unlikeliest girl at school," Christie told Entertainment Weekly in April. "I never thought I’d be in these amazing projects." We can't help but feel like we're the lucky ones, since we're able to watch Gwendoline Christie play some of the strongest female characters ever created.