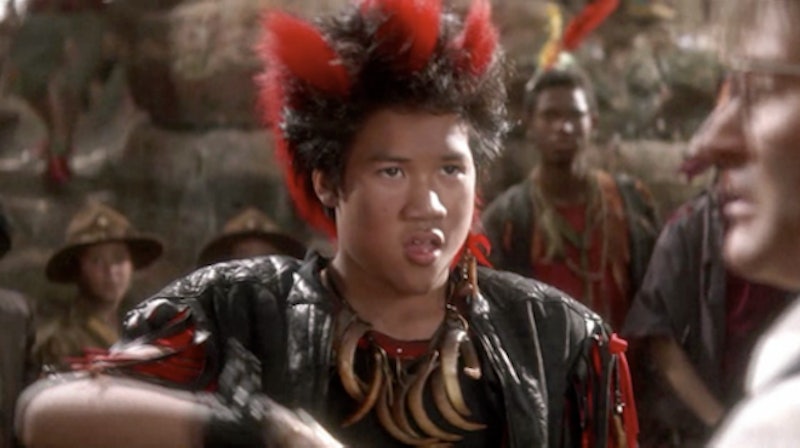 There's something we really need to talk about guys. No, it's not Donald Trump's hair, or Hillary Clinton's emails. It's something much more important to the future of the 2016 elections— why has no one told Marco Rubio to model his campaign after Rufio from Hook? If you've seen Hook, the 1991 Peter Pan spin-off film featuring Robin Williams, then you know exactly where I'm headed with this. If you haven't, please go educate yourself immediately. Seriously, you don't know what you're missing.

Let's look at the facts: Rubio is a young, rising star within the Republican party. After a series of strong debate performances, he's rising in the polls and picking up traction. Between his strong rhetoric and adorable cherub cheeks, he's seriously beginning to look like a viable Republican candidate.

But he's still lagging in third or fourth place, depending on the day. Despite presenting himself as a candidate for the youth of America, he still hasn't managed to connect with the youth voting bloc that will be crucial in 2016. Why? Because he hasn't channeled his inner Rufio, the sassy, confident, swash-buckling lost boy that won the hearts of a thousand 90s kids. I mean, just look at their names. You're lying if you haven't mixed them up at least once.

I'm going on record once and for all and making a bold bet: if Rubio takes a page out of Rufio's book, he would have the election in the bag. And it wouldn't even be that big of a stretch. He'd only need to make a few changes.

This is a no brainer. Rufio's chant is iconic, and there's no reason why Rubio shouldn't appropriate it. Imagine a packed convention hall with hundreds of passionate Republicans chanting "Ru-bi-oooooo" over and over. Isn't it beautiful?

Let's all bask in the mental image of Rubio with a red, feathered mohawk. Can you imagine how adorably badass he would look? Ted Cruz's weird tattoo posters would have nothing on Rubio.

An Intense Hatred Of Grown-Ups

So far Rubio's doing a pretty good job at getting his youth to work for him. But he should go all in. Rufio famously said, "All grown-ups are pirates." As a poor twenty-something with student debt, I can 100 percent get behind this. Let's make it Rubio's new campaign slogan. That will look extremely catchy on posters.

If Trump can ride in on an escalator, there's no reason why Rubio can't zoom in on a dystopian-looking skateboard track and descend upon his supporters. It would become the gif of the 2016 election. I'm telling you, this is a flawless idea.

One of the most important details to come out of the 2016 election is the fact that Rubio has a sword. This is incredible, and every president should have a sword in their collection. So why isn't Rubio using it more? That sucker should be coming on the campaign trail with him. Instead of debating Jeb Bush, the two should be dueling it out. That's what the people want to see.

I really think I'm onto something here. If you're Rubio's campaign manager and you're reading this, please take my suggestions to heart — I think it could do wonders for your poll numbers. I just hope that when it's time for Rubio's campaign to come to a close, it won't be as heartbreaking as Rufio's death. I don't think anyone is prepared to handle that.