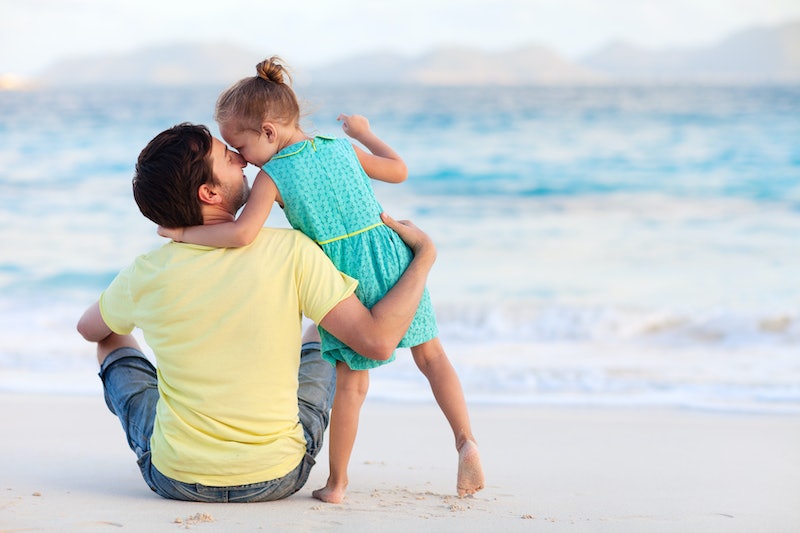 Riffing on seemingly thousands of sexist, outdated "rules for dating my daughter" lists, a t-shirt for feminist-minded fathers emphasizes that, ultimately, it's "her body, her rules." Awesome, right? Yet this message is riling up certain segments of social conservatives, who believe women's bodies belong to their fathers until dad transfers that control to boyfriends or, preferably, husbands. A father believing his daughter has bodily autonomy provokes such contempt in PJ Media columnist Bonnie Ramthun that she names the hypothetical wearer of this shirt "worst dad of 2014."

That's right — Rathun believes the worst thing a father could possibly do is instill feminist principles in his daughter. Not only is he "abdicating his responsibility," but "he is signaling to every male predator out there that his daughter is available for victimization," Ramthun writes. Because obviously teenage girls aren't smart enough to avoid predators themselves (and pervs and pedophiles troll for victims by reading messages on novelty t-shirts). Most egregiously in Ramthun's book, he is encouraging feminism in his daughter. The horror!

"Let’s hope it’s just a meme, and not an actual t-shirt," she concludes. Because...what? The Rapture? Some cool dads might get a new shirt? What is Ramthun afraid will actually happen should, heaven forbid, these words be screenprinted onto actual fabric?

Regardless of where it's printed, I think the "feminist father" message is a great, concise counter to the prevailing attitudes dads are expected to have about their daughters and dating. (Take, for instance, this message from some daughter-dating rules at the Free Republic: "I'm sure you've been told that in today's world, sex without utilizing a 'barrier method' of some kind can kill you. Let me elaborate, when it comes to sex, I am the barrier, and I will kill you." Har, har.] Not every dad sees his daughter as a "princess" or "angel" who needs constant shielding from boys, which doesn't mean he doesn't care (or won't want to hurt anyone who hurts her). But part of raising kids is eventually trusting them to make their own choices, and this includes choices about sexual activity.

Besides, the idea of "she makes the rules" might actually be a more powerful one to deter horny teen boys. As one commenter at PJ Media points out: Dad not making the rules could be seen as "an answer in advance" to boyfriend's questions like "why don't you want to, because your dad will be angry?" or "your parents won't find out, so why not?" It says that it doesn't matter why, when, where, or how, if she says no, she means it and that's the bottom line. The concept that young women might of their own free will say yes to sex actually strengthens the idea that they have the right to say no, too.

More like this
Sandra Bullock, Girlboss Extraordinaire
By Matt Harkins & Viviana Olen
What Is "The Ick?" The TikTok Dating Term, Explained
By Courtney Young
The 'Hocus Pocus' Sequel Finally Has A Release Date & It Makes Total Sense
By Shannon Barbour and Radhika Menon
Please Respect Mia Khalifa’s Rebrand
By Charlotte Shane
Get Even More From Bustle — Sign Up For The Newsletter