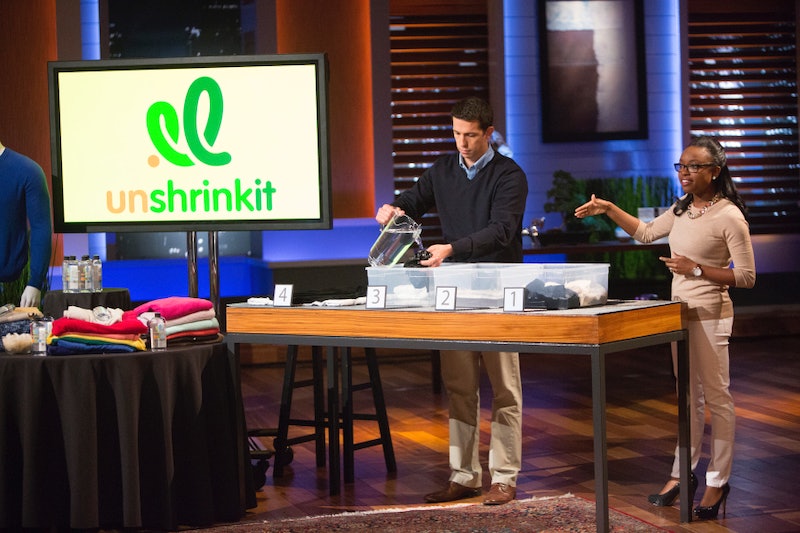 There are few things worse in life than shrinking your new favorite cashmere sweater. For centuries, those that have encountered this tragedy were relegated to mourning the loss of the garment and finding the strength to move on. But it doesn't have to be that way. It's the 21st century. We have the technology! More specifically, we have the aptly named Unshrinkit appearing on Friday night's episode of Shark Tank to change the way we take care of our clothes forever.

Unshrinkit claims to do what it says to your clothing, and I think Lori "Queen of QVC" Greiner, wherever she is, just fainted. This product was made for her business portfolio, so I know she's going to want a piece of this company. However, I have a feeling some of the other Sharks may want in on it as well — namely, Daymond John, who is Shark Tank's resident fashion expert who is probably more concerned about taking good care of his clothing than anyone else in that room.

Well, if Unshrinkit really does what it says, a lot of people will want to get their hands on the product, not just the Sharks. Here's why it could be the next big thing to happen to laundry since the washer and dryer.

It Brings Your Sweaters Back From The Dead

Like the name suggest, Unshrinkit is a patent-pending solution that claims it can unshrink your clothing. It only works on wool, cashmere, and wool blends for now, so it won't undo all of your laundry mishaps. But still, the ability to save any clothing at all from what was once thought to be irreversible damage is pretty spectacular.

How It Works Is All About Science

To create Unshrinkit, the inventors put on their mad scientist hats and experimented with various chemicals in order to find a mixture that would relax wool fibers. Wool sweaters shrink in the first place because the heat from the washer and/or dryer breaks the protein bonds in the material, causing them to curl up and shrink the garment. Unshrinkit interacts with those proteins to relax the bonds when you pour a bottle of the solution into a gallon of water. After you let your clothes soak in the mixture for 30 minutes, you can rinse them under water and straighten them out again to form the item of clothing close to its original shape. Once you let it air dry, you can then relax knowing that you've saved your sweater.

But Does It Actually Work?

Yes, apparently so! OK, I can't say that I've tried out the product myself, so technically I don't really know if it works. However, some photos on the company's website and a couple of news segments seem to show that Unshrinkit delivers what it says it can do, so it seems like a promising product. Unfortunately, both of the segments did mention that Unshrinkit has an awful odor that doesn't seem to go away until the garments are completely dry, so that's a bummer. I'll just wait and see what the Sharks have to say about the product's execution since they can smell B.S. (and apparently Unshrinkit) from a mile away.

You Can Start Unshrinking Now

Unshrinkit is available for purchase now if you're picking up what it's putting down. You can buy a bottle for $11.99 on Amazon or pick one up at a couple of brick-and-mortar locations in the U.S. But this is definitely the sort of product that should be in big box stores and on infomercials, so hopefully Unshrinkit's appearance on Shark Tank will help it get there.

In a year-and-a-half in business, Unshrinkit has sold about 8,000 units, the company recently told the Boston Business Journal. Selling at a price of about $12 each, that means the company grossed approximately $96,000 in that timeframe. Those earnings are definitely nothing to scoff at. Let's just hope the entrepreneurs behind Unshrinkit have an appropriate valuation to match the product's sales when they step into the Tank.

These Entrepreneurs Know What They're Doing

Desirée Davis Stolar came up with the idea for Unshrinkit after shrinking a cashmere sweater that was a gift from her sister to help her brave the harsh Boston winters while attending Harvard Business School. After not having much luck finding a DIY unshrinking solution online, Stolar convinced her classmates to try and create a product that would solve this problem. Her classmate Nate Barbera soon joined her to co-found Unshrinkit. After selling like hotcakes on the Massachusetts-based online retailer The Grommet, which serves as a showcase for undiscovered products, and snagging a spot on The TODAY Show, Stolar and Barbera realized Unshrinkit was something they would work on long after graduation.