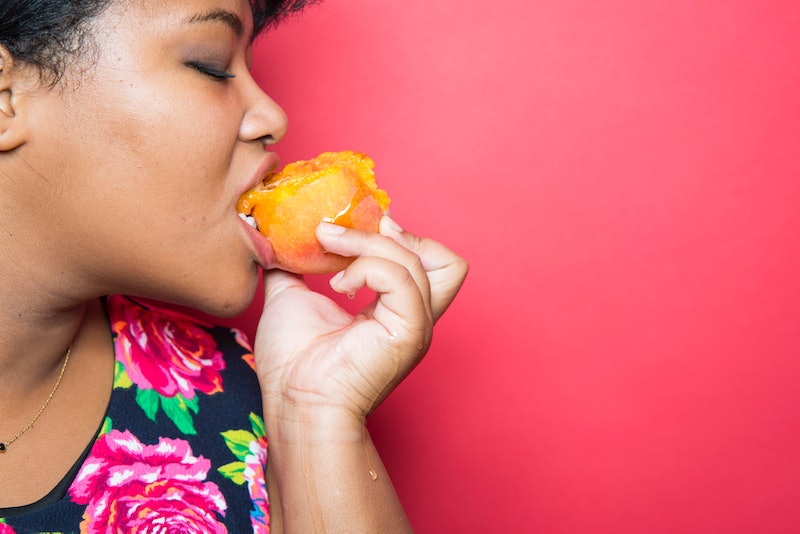 If you're familiar with the doctrine of Slow Food, which is all about countering fast-food culture with local produce and regional recipes, you may not be surprised to know that the concept of "slow eating" is the next thing on the menu. But while Slow Food is all about celebrating what's idiosyncratic about your particular area and culinary culture (NOMA, the most famous Slow Food restaurant in the world, famously serves live ants), the idea behind slow eating is more health-based. It argues that wolfing down our food is damaging our systems, and that our mothers were right when they told us to chew rather than scarf down our dinners.

The idea that eating slowly will help health isn't actually a newfangled one. A major diet craze, Fletcherism, named after its founder Horace Fletcher, was all the rage in the late 19th and early 20th century in America and Britain — but Fletcher advocated truly, amazingly slow-coach eating. He thought that masticating slowly drew all the nourishment out of food, and that your best chance of health was to grind the food in your mouth to an utter pulp before swallowing. He even advocated chewing your liquids. The trend died out, but in a 2011 article, "Fletcherism Revisited," four academics recounted a study they'd done that showed chewing a piece of food 35 times, as opposed to the normal 10, really did reduce food consumption, and might be a good thing to recommend to the obese.

So what's the idea behind slow eating — and why could it help us become healthier? Let's take a look at four benefits of chewing before you swallow.

It Helps You Recognize When You're Actually Full

Eating slowly is one of the ideas being used to combat obesity's rise — because scholars believe that getting through your meal slowly and with purpose as opposed to throwing it down your chops can actually help your body's cues about appetite and fullness respond more appropriately.

As Harvard Medical School's Health Blog pointed out in 2010 that appetite and fullness aren't just about the stomach expanding and then asking the brain to stop. Instead, the digestive system has an array of signals and transmitters, from hormones to nerves, that release during a meal to communicate the body's needs. To tell the brain you're sated, hormones in the small intestine and gut activate, and give you the telltale dopamine rush of happiness after you've had a lovely big meal.

If you chow down too quickly, the system gets confused and can't get the signals through quickly enough, and you end up taking on too much food for your needs.

... Which Means You End Up Eating As Much As Your Body Actually Needs

Probably because of the effects of the hormonal and nerve-based system in your body saying I'm full, people in slow-eating experiments have demonstrated a propensity to eat fewer calories in the course of a single meal if encouraged to slow down their eating — how fast they chewed, how swiftly they swallowed, and how much time they spent smelling and generally enjoying the taste of the food in front of them.

A comparison of slow eating in normal-weight versus obese people in a 2014 study showed that both groups ate fewer calories during a "slow" meal than they did in a "normal" one — but that obese people made less of a dent in their calorific intake. Slow-eating average-weight people ate 88 fewer calories, while slow-eating obese people ate 58 fewer. This may indicate that slow eating has to be a practice; if your body's used to bolting down food, its signals may take time to recalibrate when you decide to savor.

This isn't just important for trying to lose weight of course; oftentimes, people of all weights struggle with feeling a connection to their own sense of fullness, and the longterm result can be a true sensation of disconnect from your own body. Slowing down while eating, along with other methods, can help you make friends with your sense of fullness again, with less judgement.

It Reduces Your Diabetes Risk

In a now-famous 2013 study published in PLOS-One, a clear link was shown between higher mastication — lots of chewing before swallowing — and lower incidences of diabetes. There are a few things to point out: Japan, where the study was carried out, is the fifth most diabetic country in the world, with an estimated 6.8 percent of the population identified as diabetic in 2000; it's projected to go up to 8.9 percent by 2030. The U.S., by contrast, is third, with a whopping 17.7 percent of the population thought to be diabetic. It's pretty clear that this study has universal implications.

The study was also huge: it involved 2,283 men and 4,544 women. All were over 40, which is the point in life where diabetes starts becoming a real issue, and the results were pretty stark: the slower they chewed (measured by, of all things, color-changing chewing gum), the less likely they were to be diabetic. This isn't surprising, as slow eating has also been associated with less snacking and a lower tendency to be overweight; a 2013 study in Appetite showed that eating lunch slowly means you're much bless likely to reach for treats or snacks in the afternoon, unless you're actually hungry.

It Helps You Have A Healthier Relationship With Food

I've written about the importance of "savoring" in psychological practice before: it's the idea that serious mood benefits can be reaped by really enjoying and paying attention to the experiences you're currently having. Sounds hippy-dippy, but it's scientifically proven to help your mood and ability to cope with stressful events. Slow eating is meant to be part of a bigger practice of savoring — not just thinking your meal is delicious, but paying attention to what you're doing and how it makes you feel. No books at the dinner table, no eating while watching TV: it's all about focus and enjoyment. It's called mindful eating.

Mindful eating is just meant to stop you eating like a robot, without paying attention to what your body wants (instead of what your mind craves — like a distraction, comfort, or the habit of those sugary snacks at 3 p.m.). Slow eating is part of that idea, because you pay attention to how awesome your food is, how full you're getting with each mouthful, and when you're actually full, as opposed to when you "think you should be". It's got both the health benefits and the added psychological boost of the whole "savoring" idea. So linger over your dinner, don't eat your lunch at your desk, and get yourself into long, slow chews of each delicious mouthful — you'll feel like a gourmet and your stomach will thank you.