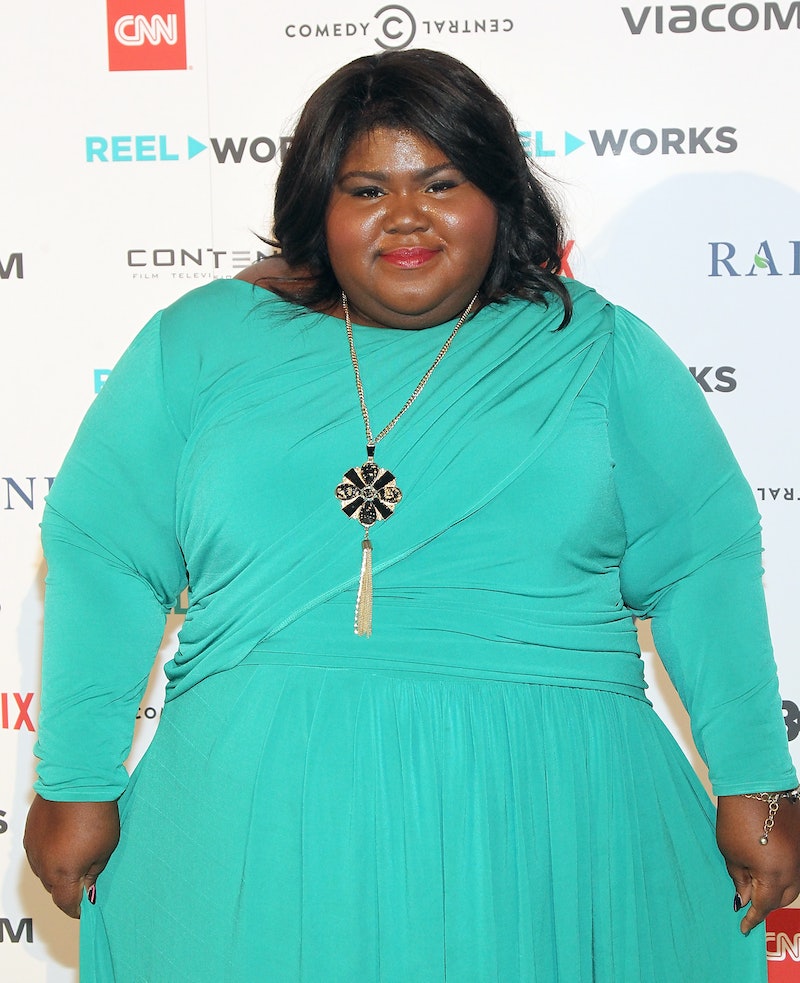 If you've been living under a rock and have somehow escaped the fact that Gabourey Sidibe is a total badass, then wake up and smell the coffee. The actress, currently starring as Lucious' incredible assistant Becky on Empire, has always been outspoken and unapologetic about her self-confidence despite criticism she's received about her appearance, and good for her. She's beautiful just the way she is, and anyone who doesn't think so can take a hike. Of course, many believe she should become the spokesperson for the body positivity movement, but that's not something Sidibe is interested in. And that's totally fine.

The issue of Sidibe's size came into focus again last week after her Empire character enjoyed a "bold" sex scene with on-screen boyfriend J Poppa in the latest episode of the Fox musical drama. It was no different than any other TV sex scene — after all, women of every shape and size have and enjoy sex— but Sidibe experienced tons of fat shaming within seconds of the scene airing, which is ridiculous. However, she also received a ton of support and sparked a Twitter movement. In fact, the hashtag #MyFatSexStory began trending as body positivity activists shared their own relationship histories. Sidibe was moved by the gesture, but it's not a movement she wants to be the face of, as she told MTV News, and I don't really blame her.

"That’s a lot of responsibility! I don’t necessarily do it on purpose, but the thing is I can’t ever decide to be anything other than a plus-sized, dark skinned black actress. There are no other options… Being the face of this also isn’t an option for me. It’s just what comes along with it," she explained. "The weird thing about representation on TV and diversity is that it’s not necessarily my problem. I do have darker skin. I do have a different body. I do have different hair. It’s not my problem because I’m the solution. In order to push diversity on television and film, all you have to do is push diversity. It’s just that easy."

She has a good point, for sure. Without a doubt, the body positivity movement is important and has helped millions of men and women around the world feel good about who they are, despite not conforming to society's standards of beauty. There's value in speaking out in solidarity with others who may have faced adversity and discrimination because of this. However, Sidibe is right in saying that she didn't choose to be who she is — she just is, and so she doesn't see a reason to "other" herself by elevating herself as a spokeswoman for a cause.

At the end of the day, Sidibe just wants to be a great actress and take on roles that she finds interesting and challenging, and her approach to the industry seems to be working out bigtime. "I’ve always felt like I can’t wait for the work to just show up; I’m going to have to make it," she said. "I hope that at some point, me making the work will come into fruition, but I think I’ve been very lucky that while waiting for the work to come, I don’t usually have to wait very long… I don’t usually chase things that I think will get me the most money or get me the most attention, I just go after roles that I really like — and that has been paying off for me."

If that's not inspirational, I don't know what is.