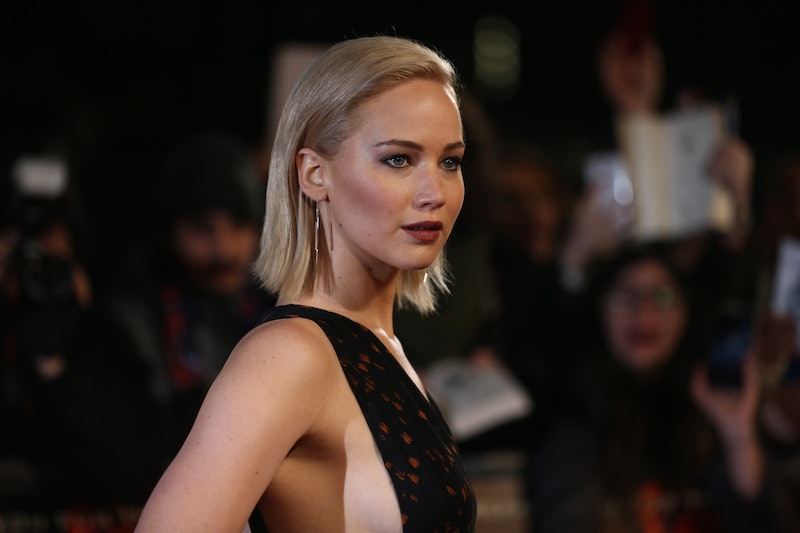 It's always a magical time when J. Law is on a press tour, and it's an even more magical time when Ms. Jennifer Lawrence says she ready to direct movies. Whether she's stuffing marshmallows in her mouth with her Hunger Games co-stars or writing game-changing essays on the gender-wage gap, J.Law knows how to get our attention and this latest announcement certainly did just that. The Oscar-winning actress is on the cover of this month's Vogue and, unsurprisingly, her interview delivered more than a few worthwhile takeaways. While much of the profile reestablished the standard, ultra-relatable reasons Lawrence has become the beloved figure that she is, (she tells Vogue that she hates wearing a bra and that she forgets to put wine in the fridge just like every other wine-loving human out there) the most exciting revelation by far is her desire to start working behind the camera: “I want to direct. But I would rather just do it than talk about it,” she told the magazine.

While Lawrence might not be everyone's favorite actress (but like, why not? Who even are you? Did you not see Winter's Bone?), it's not difficult to see that there is a need for more women directors in mainstream Hollywood. A female director has not even been nominated for an Academy Award since 2010, when Kathryn Bigelow became the first woman to win the award ever, and the number of studio films directed by women in 2014 was a despicable 4.6 percent, according to the Los Angeles Times. Gender inequality is a major issue in the United States, but nowhere is the gap more glaringly obvious than in Hollywood. In fact, it's gotten so bad that the federal government is currently investigating the lack of female directors in the industry. Lawrence could be just the crusader that the industry needs.

And though it is amazing and exciting that female-run production companies, like Reese Witherspoon's Pacific Standard, are creating better roles for women, having more women on screen is not changing the number of women behind the camera. Witherspoon's company produced two widely acclaimed movies last year, Gone Girl and Wild. Both films earned their leading ladies Oscar nominations, but both films were still directed by men.

With the respect that Lawrence has within the movie industry, and from her very loyal fan base, a Lawrence-helmed picture would undoubtedly get a lot of attention, not dissimilar to Angelina Jolie Pitt's directorial work. Jolie Pitt has directed three feature films so far and each has received a tremendous amount of buzz.

Lawrence, who has worked with great directors like Gary Marshall and David O. Russell, has undoubtedly learned a lot about directing during her time on set. In the Vogue article, she talks about sitting in the editing room with Russell on their new film Joy, trying to learn the in's and out's of the director's process.“It’s funny because I’m like, This process is so unique to him," Lawrence said. "There’s almost nothing I can take away from it. It would be like watching a dolphin and being like, Oh! So that’s how you swim in the ocean!”

If Lawrence, who is also trying her hand at screenwriting with pal Amy Schumer, can bring the tenacity and passion that she has onscreen to the director's chair, there's little doubt in my mind that she will be wildly successful. And with The Hunger Games franchise nearly behind her, I don't think it's premature to hope that Lawrence's directorial debut isn't too far off.