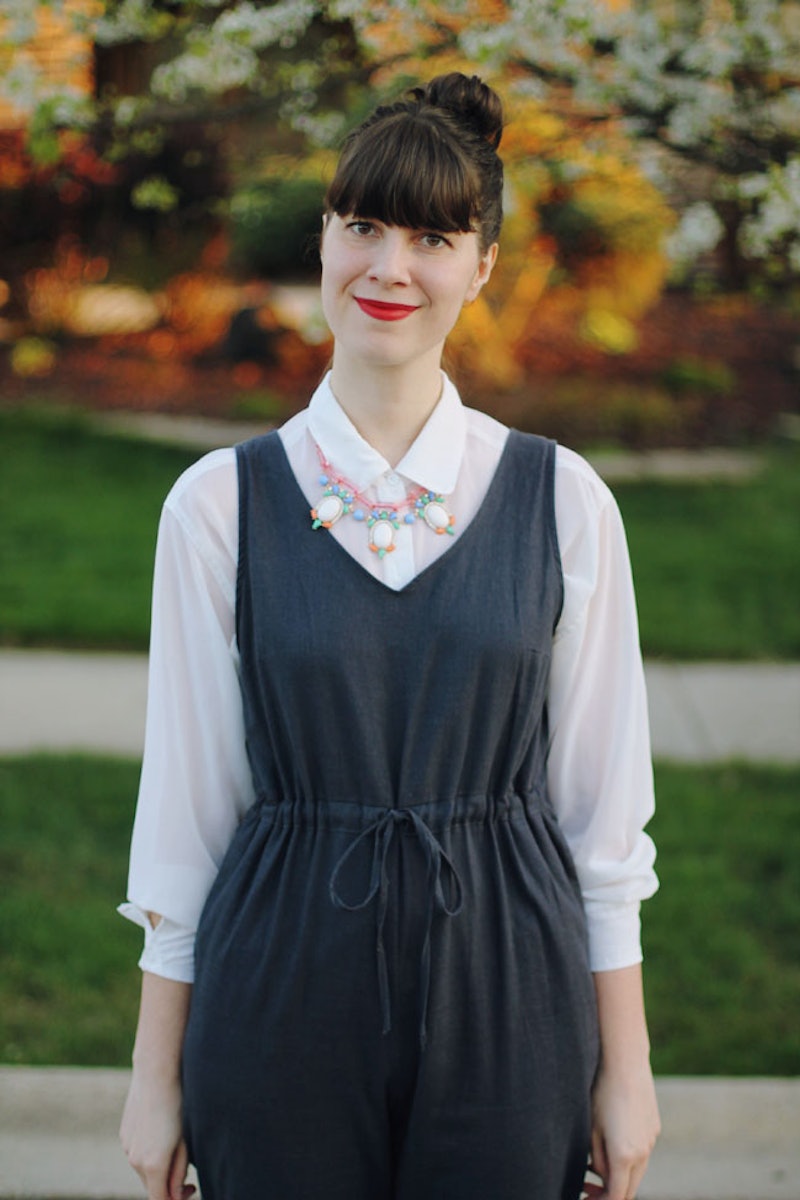 You would think being kind to yourself would be an easy thing to accomplish, but figuring out how to be more body positive is actually incredibly trying. At least in the beginning. I'm an pretty average gal, with thighs that pancake and a tummy that shows all the Sara Lee cheesecakes I've devoured while watching Lifetime movies. And I'm totally OK with that. So when I had the thought of actively trying to be more body posi for a week, I thought it'd be a cinch. A kind word here, biting back a groan when I see a roll there. It's stuff I normally do, anyway.

But when you actually make a conscious effort to become more body positive, you may begin to realize just how negative you actually are. It's the little things that sneak through: Crossing your legs so you don't have to see your thighs take up so much room, choosing the maxi skirt instead of the midi because you don't like how stocky the hem makes your legs appear, feeling a little dejected when seeing how big your undies look crumpled on the ground by the shower.

You might not call yourself names when you look in the mirror. You might have a totally rad relationship with cupcakes. But are those things enough? I tried to spend a week answering that question, while on my own personal quest to become more body positive. Here's what I learned.

Aaand we crash and burn right out of the gate. Like I mentioned, I started off this experiment cocky as all hell. "I love my body," I told myself as I started my Tuesday, hopping from foot to foot as I wiggled into my mom jeans. "I might not even have anything to report on." If only that were true.

My first catch was moments later, when I was sliding out of said mom jeans and reaching for tummy control tights instead. The downside of high waist pants is that they're baggy in the oddest places, and at that moment they made me look like I just finished a tray of lasagna all to myself. Which was why I was going to slip the tights on first... To get that bulge "under control."

That's when I realized: Why would that bump embarrass me? Why did I feel like I needed to cinch it in? Why should I not eat an entire tray of lasagne?! Surprised that I failed so quickly, I snatched my hand back from my delicates drawer like I just touched a hot stove. Re-buttoning my jeans again and staring at my tummy in the mirror, I was interested to see how else I was putting myself down without realizing it.

Day 2: Trying To Talk To Myself Like A Friend

Every time my best friend texts me over how many chip bags he inhaled or how many cake pop runs he did in between breaks at work, I tell him to stop beating himself up. If the yen for a pink frosting cake pop arises, who are you to deny yourself that little treat? So why don't I offer myself the same treatment? Clearly, being conscious of body positivity isn't enough to stop myself from saying mean, body shaming things. I began feeling the importance of completely changing the way you think and approach the mirror, otherwise all you'll be doing is biting back things you still perceive to be flaws (like your thunder thighs or muffin top).

So on the second day, I decided to start trying to talk to myself like I was my own best friend. When I'd cringe over a chubby cheeked photo I tried to Instagram, I paused and told myself those cheeks were adorable. When I felt slightly embarrassed seeing a tummy roll make its way over my jeans, I told myself in the same way I would have told my friends that my body be bangin', with or without the pooch.

Once I started to react to myself the same way I would when my favorite people would bring up similar body concerns, my dialogue started to change. I was still having "I wish I wasn't chubby" thoughts, but I was remembering that "chubby" isn't a bad thing along the way.

Day 3: Taking Out Any Obstacles That Make Me Feel Shitty

I found that it's a whole lot easier to be body positive if you take out triggers that make you want to put yourself down. I can't tell you the last time I owned a scale, and because of it I have no idea what my weight actually is, nor am I curious. If my body be rockin', what does it matter what the numbers associated with those curves are?

I was trying to build myself up and reset the way I'd been trained to think, so removing extra pressures felt like a weight off my shoulders. It was also a way of avoiding triggers that send the mean thoughts into motion. I'm not saying you should avoid the mirror forever. But if you want to love yourself more but can't stop the nit-picking, try to take out the obstacles that trigger those disappointing thoughts.

Day 4: Changing How I Looked At Other Women's Bodies

I can't really accept my own body as beautiful if I find perceived flaws in other people's, now can I? I don't actively sit there and think about other women's waistline numbers or how their butts look in jeans, but I was curious to see what would happen if I included outrageous positivity into the mix.

I'll tell you: Compliments rolled off my tongue so much easier. The more positive I was towards other people, the more positive and approving I allowed myself to be about my own body.

You know that one scene in Mean Girls where Regina starts off the mirror spiral by going, "My pores are so huge," and then Gretchen chimes in, "My hairline is so weird," and the girls look expectantly at Cady... and she folds and goes, "I have really bad breath in the morning?"

If your friends are constantly harping about their jelly rolls or how they have to go on a diet of ice cubes, you're going to be hard pressed to look at yourself in a loving way. On Day 5, I wanted to see how I would feel if I found myself a little community of women to look up to that were body positive and fiercely passionate about raising others up.

And holy shit was it a game changer. I found Instagram babes sitting in chairs in nothing but sports bras and short shorts, letting their rolls sit there and not be sucked it. And the more times I saw it, the less shocking it became. I also came across posts that acknowledged how damn hard this journey can be, saying things like, "Shout out to the girls that hate your bodies but are trying really really hard to find the beauty and comfort in them because that shit is hard and takes a lot of time and is emotionally exhausting. Proud of ya'll." The more I surrounded myself with that, the more I become embarrassed over my self hate, not my curves.

I wanted to take things a step further and take out the pressure of altering my appearance for the sake of "being prettier." I knew I was still going to work out, and I was still going to play with clothes and put on makeup, but I wanted to do those things for me and not to be "better looking." So I reframed how I looked at these things: I wanted to workout so I could become stronger. So I could run longer without feeling like death, or lift 100 pounds and feel like a beast. Not so my arms can look like Hollywood's interpretation of "beautiful" or "ripped."

On this day, dressing up started to feel less about looking good for other people, and more about showing how I looked on the inside. And you know what? I was feeling pretty in control of my body.

Cultivating body positivity is a process that takes longer than seven days, and the majority of it consists of shedding the negativity away. Most of us have this heavy coat of self hate put around our shoulders from a very young age, implanted by our mothers who would sigh over bathroom mirrors when they didn't think we were looking, by TV shows that would innocently show girls giggling over how "bad" they were when they ate the brownie, or by magazines in which no woman larger than a size 4 represented the hundreds of pages inside.

There's so much to beat back that you can forget to cheer over the small wins. So on Day 7, I cheered. I thought of how, in just seven days, I began taking the right steps towards fully accepting myself. I high fived myself over all the compliments I mentally gave to other women, over all the finger guns I pointed at myself while standing in front of my mirror in nothing but my undies, and all the times I looked down at my thighs and smiled, not winced.

That's progress. And that's all kinds of wonderful.