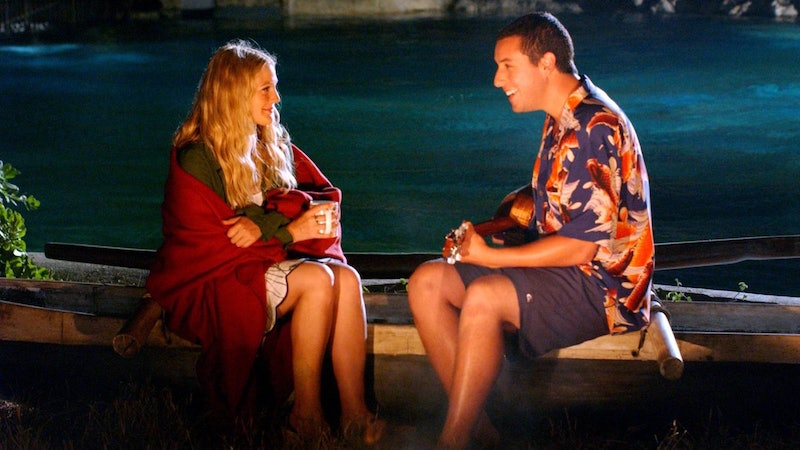 "Based on a true story" or "inspired by true events" is a phrase all too commonly used in Hollywood. It seems like every movie has some sort of claim on a real story, which pretty much makes every "true" tale told on-screen made up. At this point, you could tell me that The Hunger Games was based on a true story and I wouldn't even bat an eyelash. But just because the phrase has lost its weight doesn't mean there still aren't plenty of surprisingly movie-ready true stories out there. Many "based on a true story" films are based on the lives of famous people, like Oscar-winners The Social Network and The Theory of Everything, and are easily recognizable as such. Others, though, are harder to spot. So, as a helpful guide, here are seven movies you didn't know were inspired by true stories.

I know what you're thinking, "50 First Dates, as in that Adam Sandler-Drew Barrymore rom-com about a girl with amnesia? How can that wacky movie be based on a true story?" Well, the answer is complicated. While it's not clear whether or not 50 First Dates was actually based on a real story, it echoes the life of Michelle Philpots, a woman who lost her short term memory in 1994 as a result of brain damage sustained in a bad car accident in 1990. She had already been with her husband for a few years before her accident, so she doesn't have to be introduced to him every day, but she did lose her short term memory before they were married.

Tom Cruise wasn't the only one who couldn't handle the truth of A Few Good Men. The studio behind the film was sued after the film's release by PFC David Cox and some of his fellow Marines, who had been defendants in a case of hazing gone wrong. In fact, their story inspired screenwriter Aaron Sorkin to write the script, though he changed all the names and details of the case.

The Conjuring is based on the adventures of real-life couple Ed Warren (Patrick Wilson) and his wife Lorraine (Vera Farmiga), who made a living as investigators of the paranormal starting in the 1950s. The haunting that inspired The Conjuring reportedly took place in 1971 in the home of the Perron family, who contacted the Warrens to help investigate their haunted house.

The musical Chicago was inspired by the cases of two women, Belva Gaetner, a cabaret singer, and Beulah Annan, a laundry worker, who were accused of killing their lovers in 1924. In reality, the two women did not meet in jail, nor did they form a popular song and dance duet after their release from prison. They were, however, both described as glamorous lovers of jazz and booze.

Believe it or not, The Blob, about a giant blob of goo that consumes people, was actually inspired by a real police report. In the 1950s, Philadelphia cops reported finding a glob of gelatinous material that dissolved on site. The substance was never identified, and some people claimed it was extra terrestrial.

Steel Magnolias, a drama about a group of Southern women, seems like the kind of movie that would be based on an epic piece of literature, not a true story. But, it turns out the movie was based in part on screenwriter Robert Harling's sister, who inspired the character of Shelby (Julia Roberts). I won't spoil what happens to Shelby, or why Harling wrote a movie to honor his sister, but I will tell you to stock up on tissues before you watch it.

Robin Williams' character of a Vietnam Air Force DJ in Good Morning, Vietnam was based on real-life Adrian Cronauer, though the true events were largely fictionalized for the film. But the actual Cronauer didn't mind having his life embellished on screen. "It was never intended to be a point-by-point accurate biography. It was intended to be a piece of entertainment, and it certainly was that," Cronauer told Military Times.

Man, I don't know if I should hope that my life is interesting enough to inspire a wacky movie or if I should just be glad for my normal, day-to-day life.