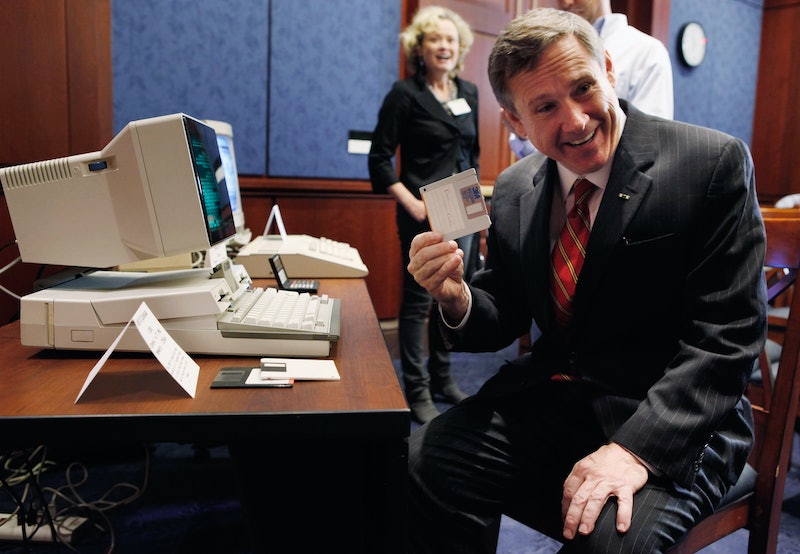 I've commented many times on the fondness I feel for the early Internet; as someone who was born in the mid-'80s, I grew up right alongside the “Information Superhighway,” as it was frequently referred to back then. This means that I also grew up fluent in a huge number of '90s Internet acronyms, mamy of which have now been lost to the sands of time. Or, y'know, the megabytes of time. Whatever. You get what I mean.

Obviously there are still a metaphorical boatload of tech-based acronyms we use today. LOL is still widely used, for example, as are OMG, IMO, and JK — and indeed, they've gotten even more pervasive, popping up not just online, but also in text messages and sometimes even in real life. I'll be honest: I've never understood the point of saying an acronym out loud to another person. Acronyms are meant to save time and improve efficiency by shortening the number of characters you have to type, but in actual speech, “BRB” and “be right back” have the same number of syllables... which, to me, defeats the whole purpose of using an acronym in the first place.

Aside from the aforementioned still-common favorites, many acronyms that were ubiquitous in the '90s are rarely encountered today. Why did they fall out of favor? Largely because they were pegged to technology or social conventions that are now outmoded. But hey, at least we can keep the past alive ourselves, right?

Used primarily in chat rooms, the question “A/S/L?” was used to deduce a little basic information about how it was you were talking to. However, like many kids who came of age alongside the Internet, I was also taught that regardless as to how anyone answered that question, there was never any way to know whether they were telling the truth; as such, it was imperative that I never reveal anything about my actual self on the Internet, ever. The number of times I told people I lived in a time zone that was nowhere near my own is a little embarrassing in retrospect. (And yet here I am, writing on the Internet as my actual self for a living...)

These days, the acronym is more or less obsolete for a few reasons: One, we're a little more into maintaining our anonymity online; and two, if we are willing to reveal how old we are or where we're located, our profiles can take care of answering that query for us. However, the idea that someone's answer to “A/S/L?” might not match up with the reality is still alive and well — we just call it catfishing now.

Meaning: An online chat program and messaging system. From the ham radio term “CQ,” or “seek you.” (Get it? “ICQ” equals “I seek you.” Clever. Veeeeeeery clever.)

I spent a lot of time on ICQ when I was about 12 years old — and in fact, I probably spent more time on it than I did on AOL, despite knowing that AOL was The Big Thing at the time. (I always made sure to turn the volume down before I signed on, though, because of that massively loud horn noise the program made when you booted it up). First launched by Mirabilis in 1996, ICQ has changed hands a few times since then; it was acquired by AOL in 1998, who then sold it to Russian Internet service Digital Sky Technology in 2010. Its userbase has also shrunk pretty considerably over the years, going from a peak of around 100 million registered accounts in 2001 to only about 11 million monthly users today. Still, though — it's impressive that it's still around, is it not?

Meaning: Bulletin board system (not “be back soon,” although the acronym might also stand for that particular phrase).

BBSes were originally more like intranet systems than Internet ones, allowing a whole bunch of computers to connect to a system using a terminal program. They had message boards, they allowed people to share files with relative ease, and sometimes they even had chat programs — but the rise of dial-up Internet in the mid part of the decade basically killed the market for them.

This isn't to say that the BBS format totally disappeared, however; it adapted to function as an Internet tool. My high school, for example, had a BBS that was used both to run our school email addresses and as a drop box for some assignments (particular in literature classes), and many of the message boards that are still around today owe their structure to the BBS — think Reddit, 4chan, and even most comment sections on websites.

OK, so I'm cheating a little here — DOS is a general computer term, not an Internet-specific one. But back before Windows as we know it today, Mac OS, and perhaps to a lesser degree Linux had become the standard home computer operating systems, most of us dealt with DOS at one point or another. The earliest PC I remember my family owning — a sort of Frankenmachine one of my dad's friends built for us — ran on the Microsoft version, MS-DOS; my crowning achievement as an early computer user was memorizing the commands needed to install games and being able to take care of the installation process myself.

Alas, this is not a skill I have managed to hang onto in the decades since. I blame the blessing and curse known as the Installation Wizard. Fun fact, though: If you have a few favorite PC games that are too ancient for your current machine to run, there's a handy little tool called DOSBox that will emulate DOS on your modern home computer.

You know what I love about the productivity tool Slack? It's basically a really pretty-looking IRC, which means that a) learning how it works was a breeze when I first started using it, and b) I get a little rush of nostalgia every time I load it up. IRCs were a staple of early Internet communication, even though they've fallen somewhat out of favor these days. Remember how much fun all those chat rooms and programs used to be, even if they were also a little sketchy?

Anyone who played video or computer games in the '90s should be familiar with the unique sound of MIDI files; if you weren't a gamer back then, though, odds are you encountered at least a couple of homemade Geocities or Angelfire websites that autoplayed some terrifyingly loud MIDI song every time they loaded. Apparently we also have MIDI to thank for modern dance and electronic music.

MIDIs could be fun on their own, too, though, particularly in the pre-Pandora and iTunes days — that is, before actual music was readily available on the Internet. I used to spend a disgusting amount of time on a site specializing in MIDIs of popular songs — I think it was called MIDI Heaven, but my memory is a little foggy (sorry, I'm old) — listening to a weird combination of Top 40 hits, the classic rock my dad raised me on, and showtunes, because hi, theatre person here. No regrets, y'all. No regrets.

Do people still use “TTFN?” Probably, although since I honestly can't remember the last time I encountered it in the wild, I'm assuming that it's not nearly as widespread as it was during the '90s. As for why it was so widespread in the '90s… well, I'm actually not totally clear on that, either.

Most of us probably recognize it as Tigger's catchphrase; the character was obviously around long before then, though (A. A. Milne's The House at Pooh Corner , in which Tigger makes his debut, was originally published in 1928, and Disney's version of the tales debuted in 1966), so it's a little bit of a mystery. Both the Disney Channel and home video were on the rise when us '80s and '90s kids were all… well, kids, so maybe it was the ready access to Disney's Winnie the Pooh shorts, films, and television series (Welcome to Pooh Corner, anyone?) that cemented Tigger's sign-off into our collective cultural lexicon.