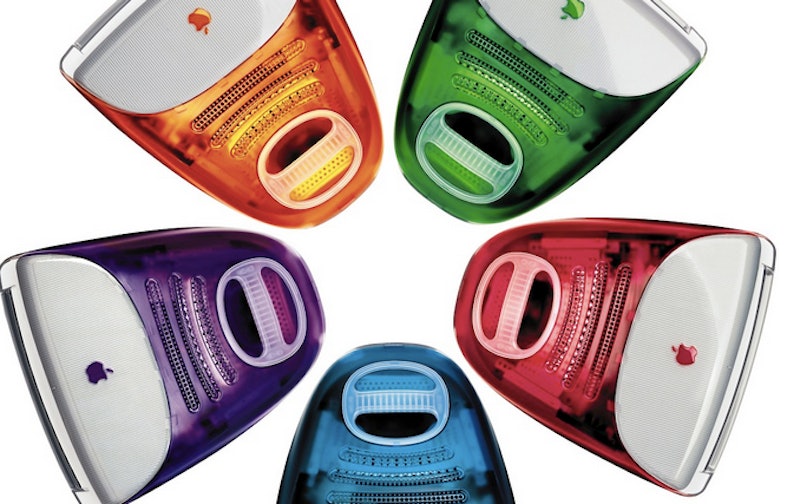 It's funny how the things that seem so futuristic to us when they're first released end up getting so retro, so quickly, isn't it? Take these pieces of '90s technology that seem ancient now. Once upon a time — and not too long ago, at that — we could hardly conceive of anything more advanced coming our way, because obviously they were so amazing that nothing would ever top them, right? Well … wrong. If both sci-fi and actual history have taught us anything, it's that there will always be new discoveries that will change everything we ever thought we knew about technology. It will happen more quickly and more frequently than we might like. But hey, at least we can still get nostalgic about it all, right?

The '90s in particular saw a huge array of advancements in home computing and electronic technology, so it's no wonder that those of us who grew up during that time have a soft spot for the tech of our youth. I've already waxed poetic about things like dial-up Internet and the kinds of telephones we started to refer to as “landlines” when cell phones became a thing. So today, let's turn towards a few devices that might not be quite as flashy, but which inspire a certain sigh of “Ah, memories!” nonetheless.

Whenever you're having trouble keeping up with the technology of today (and the youths who use it), just remember that every generation will one day have to square with the same thing. It's kind of comforting, no? Even if you still miss your Palm Pilot.

Or “beepers,” or “buzzers,” or whatever the heck you called them. Pagers actually have a long and rich history. The first radio pager system was put into place in 1950, with doctors in New York City paying $12 a month for access to six-ounce pagers that could receive phone messages within 25 miles of a transmitter tower. Then Motorola developed the ReFLEX wireless protocol in the '90s, leading to the widespread use of pagers for us non-doctor laypeople throughout the decade. Bonus points if yours was neon, see-through, or both.

In 2001, however, Motorola announced that it would cease manufacturing pagers, thus signaling the end of an era. Good thing we've got smartphones to fill the void now.

I actually missed the HitClips fad. It probably had something to do with the fact that my dad had trained me from an early age to eschew contemporary pop music in favor of classic rock (my childhood was basically scored by the British Invasion). In any event, other people who are much hipper than I am inform me that they played low-quality, one-minute clips of songs from NSYNC, Britney Spears, and more of the '90s' and early '00s' hottest acts. Were they good? Probably not. Were they fun? Heck yes. Or at least, that's what everyone tells me.

Who could forget their first Discman? Originally launched in 1984, it became a must-have for every music lover over the next decade or so. The best one I ever had boasted a whopping 40 seconds of anti-skip protection — but I'm sure that most of us spent the majority of our time with the Discman D121 model seen here. It had little to no anti-skip, but good gravy, did we love that thing. So many memories, with such a questionable soundtrack.

I didn't have a MiniDisc player, but one of my best pals in high school did ... so at least there's that. Falling somewhere between the height of the Discman and the rise of the MP3 player, MiniDisc players first hit the scene in 1992, finally giving us a digital means of storing and playing music. Alas, the technology just wasn't advanced enough to stay ahead of the curve — although somewhat surprisingly, Sony marketed them until as recently as 2013.

Let's move away from music for a moment. Remember these guys? We watched a bunch of today's kids and teens react to them back in May, and it made me feel really, really old. They were perhaps more a product of the '80s than the '90s, but before the Game Boy really hit its stride, they were the only video games we had that we could actually take with us on long car rides.

By which I mean the big ol' green-screened clunker that was the pinnacle of handheld gaming between 1989 and 1996. After that, the Game Boy Color came along, and, well … now we have handheld systems capable of displaying 3D images without the aid of those freaky glasses. My, how the times do change. But hey, at least retro gaming has made something of a comeback; you can easily run the original Sonic the Hedgehog on your smartphone these days. (And yes, I realize that Sonic was once Sega's poster child, but A) we're still talking about the early days of handheld gaming here, and B) Nintendo nabbed the rights to the character in 2013 anyway. Just sayin'.)

Fun fact: The very first car phone dates back to 1946. The equipment for it weighed 80 pounds. Like the Tiger handheld video games, the car phone itself hit its peak in the 1980s. By the time the '90s rolled around, the cell phone had largely replaced it in our “must talk to everyone right now” affections. Still, I recall car phones being spoken of in hushed, almost reverent tones when I was kid. They were almost mythical; the most high-tech thing we could think of. A phone … in your car. How cool was that?

I'm still unclear about why, but when the iMac debuted in 1998, my high school outfitted every computer lab we had with them. I can only assume that it's because they looked cool, although nothing dates itself quite like an aesthetically distinctive piece of technology. iMacs are still around, obviously — they're Apple's signature desktop computer — but they've since moved on from that unique, space-age look to something sleeker. Not going to lie: I kind of miss the see-through versions of my youth. There's something inexplicably thrilling about being able to see your device's innards.

No, not public displays of affection. I mean “personal digital assistants,” of the variety made popular by Palm in the mid-'90s. (My dad had one for work when I was a kid, and I thought it was the coolest thing ever.) First launched in 1997, Palm Pilots, aka PDAs, were the mobile organizers of your dreams, keeping track of everything from your dentist appointment to that really important presentation you had coming up. Alas, though, like so many other products, they become mostly obsolete with the rise of the smartphone. Why carry two devices capable of upping your productivity when you could carry one that does it all instead?

I like to think of zip drives as the MiniDisc player of computer data storage: They fall between one extremely popular system and another, although they're neither low-tech enough to be lumped in with the former nor high-tech enough to be paired with the latter. Instead of Discmen and MP3 players, though, the two poles in this instance are floppy discs and CD-ROM.

Zip drives were introduced by Iomega in 1994, and initially sold well, thanks to their relatively low price point and high-for-the-time storage capacity. To put it in perspective, the three-and-a-half-inch Floptical diskette released in 1991 held 21 MB of data, while the three-and-a-half-inch Superdisks released in 1996 and 1997 held 124 and 240 MB, respectively. An Iomega zip drive cartridge, however, could hold anywhere from 100 to 750 MB, depending on how recent your model was.

But then CD-writing technology happened, and then thumb drives happened, and, well … you know how this one goes. You can still get the cartridges on Amazon if you really want them, though, so … there's that.

Farewell, last remnants of '90s technology. You shall be missed.