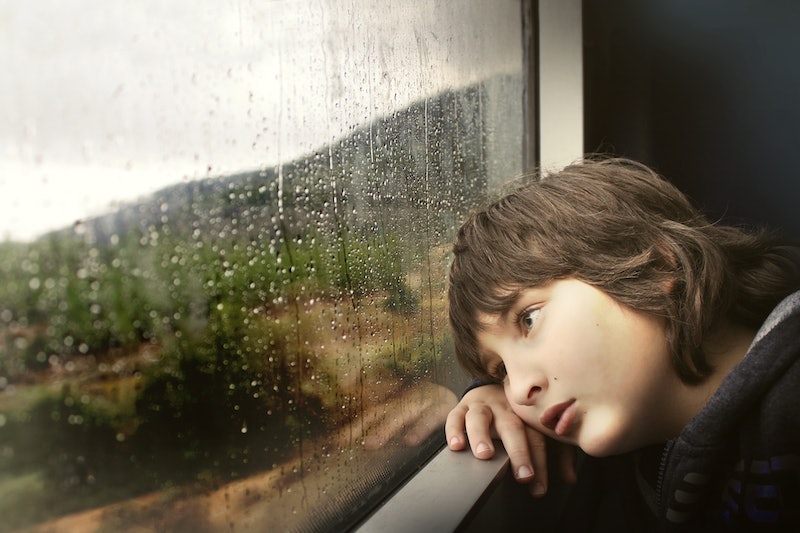 Feminism is for men, too — and the picture book Tough Guys (Have Feelings Too) is here to prove that to you. Little boys can often suffer under pressure to hold up a strong masculine ideal, and the saturation of the media by endless super-hero films doesn’t do much to help that. That’s why this new children’s book by Keith Negley, which was published in October, is so great: it teaches little boys that they don’t have to feel like Superman all the time.

At first glance, you’d be forgiven for thinking this picture book further perpetuated gender stereotypes; after all, the male characters are all shown as archetypes of machismo (such as a wrestler, a racing driver, and a cowboy). But this book may actually go a long way towards dismantling rigid gender roles. Society often positions people at the extreme ends of the gender spectrum — but this mixture of traditionally “feminine” emotions with traditionally “masculine” characters will help children understand that there’s no reason they can’t have both. For young children forming their own gender identity, it’s important that they understand they can still be a “tough guy” (if that’s what they want) without having to sacrifice the very real emotions that they feel.

Tough Guys (Have Feelings Too) also continues the great work done by the Pixar film Inside Out in helping children understand and accept emotions other than happiness. As Maria Russo points out in The New York Times, a great way to help children manage their emotions is to capture their imaginations — and these exaggerated figures of machismo do exactly that.

Once children’s imaginations have been caught, the book goes on to explore emotions like fear, frustration, disappointment, sadness, loneliness, and love. Each page is beautifully illustrated to prepare its young readers for where they might experience these emotions: frustration at losing a race might perhaps move an ambitious driver to tears; an adventure away from home might be mixed with a sadness at missing your family. The book even explores depression through the image of a superhero staring miserably at his sandwich, showing that emotions don’t have to have a “reason” to be valid.

And best of all, there are plenty of tears. For both men and women, crying can be considered a sign of weakness or hysteria — forcing them to repress this very natural emotional response. But Tough Guys (Have Feelings Too) wants to put an end to that right now. The picture book can officially take its place alongside Sia’s “Big Girls Cry”, Gloria Steinem’s statements on rage-crying, and How To Get Away With Murder’s Annalise Keating who cries in literally every episode and still manages to be a total badass. This is the crying revolution, and it looks like the next generation might actually grow up knowing it’s OK to have a good cry when you need. BRB, sobbing.

More like this
The Viral 'Little Miss' Franchise Is Focusing On Mental Health Next
By Darshita Goyal
I've Read The Harry Potter Books 30+ Times & This Plot Hole Haunts Me
By Kelsey Stiegman
The Biggest Differences Between 'Bullet Train' & The Book It’s Based On
By Arya Roshanian
We’ve All Had Bad Sex. Nona Willis Aronowitz Is Talking About It.
By Sophia Benoit
Get Even More From Bustle — Sign Up For The Newsletter