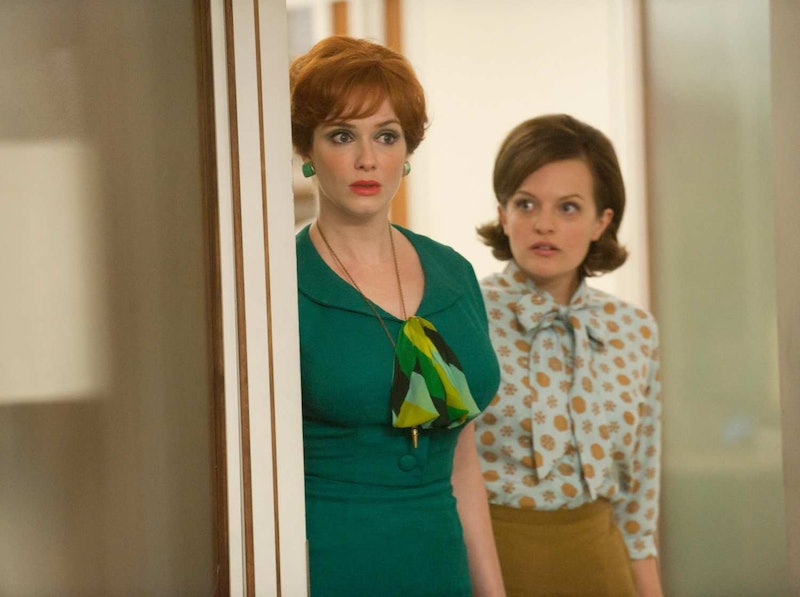 Of all the very personal things people do while on the clock at their jobs, almost nothing — including pooping, drinking, and using Tinder during a regional sales meeting — is quite so feared as crying at work. Workplace weeping has long been labeled a sign of weakness and unprofessionalism, a pee-wee league move that reveals you as unprepared to maturely deal with the power struggles and petty disputes of office life. There was even a bestselling career guide aimed at young women called If You Have To Cry, Go Outside . Crying at work is often painted as self-indulgent, immature, and a sign of poor self-control — so, basically, everything we're told not to be in a business setting.

Even though no less a business celeb than Sheryl Sandberg has admitted to crying at work and called for it to become less taboo, there's still a lot of "women in the workplace" baggage attached to shedding tears in front of the people who read your TPS reports. Suppressing your tears is one of the many things women are supposed to do in order to appear "strong" at their jobs — which makes the idea that tears are never acceptable in the workplace a feminist issue.

While it's certainly not good if you find yourself crying at work all the time — and if you do, that's a sign that you either need to work on managing your emotions, or need a new job — sometimes, work crying is inevitable. So let's stop pretending it's a thing that only other people do. Here are nine reasons why you shouldn't feel ashamed about it.

There's an old line of thinking that posits that crying makes you seem less powerful. What is implied, of course, is that when you're a woman, crying makes you less powerful (after all, no one claimed that after President Obama cried during a speech to his campaign staff in 2012, he had somehow become less president-y). MSNBC host Mika Brzezinski told The Huffington Post that the experience of crying at work made her feel that "when you cry, you give away power."

But a 2011 study of crying in the workplace, which surveyed over 700 American workers at all different levels of their careers, found that not only did employees at every step on the career ladder cry at work, but that after they cried, most women judged themselves far more harshly than they judged crying coworkers.

2. Everybody Else Has Cried At Work

A lot of us have cried at work. So many of us, in fact, that it can't just be a sign of being a crappy employee. In fact, 41 percent of women have cried at work at some point in their careers — how can you lean in to that statistic, while still pretending that crying at work is some freak occurrence that only happens to big babies?

3. There Is No Such Thing As A 'Wrong' Or 'Right' Type Of Crying

Many people believe that some workplace crying is permissible, depending on the cause of your crying — i.e. no one will hold it against you if you burst into tears after finding out about your divorce, but everyone will hold it against you if you cry because your boss screamed at you after you broke the copier. The faulty assumption here is, of course, that sometimes it's the right of your coworkers to judge you based on your non-invasive display of emotion.

What a crock. There is no "wrong" and "right" type of crying. There is just genuine human emotion.

4. It Doesn't Hurt Other People

Crying isn't getting angry and throwing a phone, or knocking papers to the ground, or any number of other explosive, bullying, or intimidating behaviors that are tolerated in many offices (behaviors I saw hundreds of times in my decade in the corporate world, p.s.). It's not yelling at an intern or assistant because you feel overextended and exhausted. Crying doesn't mess up anyone else's day, it doesn't make anyone else feel frightened, it doesn't make anyone get nervous that their job might be on the line. It's just some blobs of saline.

It's not anyone else's business why you're crying, because your crying isn't hurting them — and the idea that you owe anyone an explanation about why you're crying at work is rude, frankly.

5. Trying To Control It Takes Energy That Could Be Spent Elsewhere

We're rarely in charge of when we cry. Crying is a biological function of our lacrimal glands and autonomic nervous system — our lacrimal glands are always producing liquid to keep our eyes lubricated, but when we're really upset, we produce so much fluid that our lacrimal drainage system can't keep up, and voila, tears. It's up to you whether you spill them in front of your peers, or run out to that one loading dock that smells like hot dog water in order to cry alone, but once your cry reflex gets triggered, most of us are helpless to stop it.

You're not the boss of your tears. Sometimes, you're not even the boss of whether you stay or run after they start flowing — say, if you're a lower-ranked employee who starts crying after getting dressed down by your boss during a meeting in their office. So don't think you're "making a scene" if you cry at work in front of others, and don't feel guilty for the way it makes other people feel.

6. It's Far From The Most Disruptive Thing You Could Do At Work

Think of your co-worker who takes naps in the store room every afternoon, or the person who's always watching basketball games really loudly on their computer.

Now think of a coworker who had a coughing fit while giving a presentation. Was he being rude and inappropriate? No, because he wasn't doing something to disrupt other people's days on purpose. Something physically happened to him, because he lives inside the same vulnerable meat-husk of a human body as the rest of us, and was unable to stop it. Crying is the same deal.

7. Your Tears Are Nothing To Apologize For

Almost everyone who cries at an unexpected moment in public apologizes — and this goes double for crying at work. Hell, Ann Curry apologized over and over again in the clip at the top of this article, when she broke down into tears while announcing her firing from Today live on the air.

But take a second and watch that clip again. Did Curry actually do anything worth apologizing for? Or was she just showing how deeply she was invested in her job, and how much it meant to her? Why should she apologize for that? Tears are part of the human experience, and pretending that the human experience somehow stops at tour office door is a lie.

In fact, Joan Williams, a professor at the University of California Hastings School of Law, told Fortune that when you cry at work because of a work-related conflict, you shouldn't apologize; you should say something along the lines of “We're going to stop talking now, because this conversation is troubling to me. I'll let you know when I'm ready to discuss this further." After all, your office tears aren't coming out of nowhere; they're a response to a situation, and they are a sign that that situation needs to be dealt with.

8. Crying Won't Hold You Back Professionally

Conventional wisdom advises that crying at work might hold back your career. Many people — including, surprisingly, many professional women — are invested in the idea that crying in the office in front of male colleagues will keep you from getting hired or promoted, and mark you as someone who can't handle hard work.

But the facts just don't bear this theory out. Many high-ranking professional women have reported crying on the job, and some have even reported that it improved their situations — one executive interviewed by Fortune noted that her tears of frustration during a drawn-out business discussion actually reminded her coworkers that they had lost sight of their original goal.

And Anne Kreamer, author of It’s Always Personal: Emotion in the New Workplace, spoke to hundreds of people who had cried at work, and found it made no difference in terms of their career success. Steve Jobs, in fact, was well-known around Apple headquarters for his frequent workplace crying. Are you supposed to be held to a higher standard that Steve Jobs?

9. The Right To Cry At Work Is A Feminist Issue

The idea that tears are always wrong in the workplace is an idea that specifically targets women — because women happen to have six times more prolactin (the hormone that induces tears) than men do, and are more likely to have been raised to believe that crying is an acceptable response to frustration or sadness than men. Lots of women, already nervous about being seen as competent in the "boy's club" that is many workplaces, then get locked into a no-win face-off: suppress their tears and feel terrible, or let them out and feel like a failure.

So the next time you have to cry at work, for the sake of your job, your sanity, and the overall well-being of humanity, just let it out. You're no less of a badass for it — in fact, you're rather brave.

More like this
15 Black-Owned Liquor & Wine Brands To Add To Your Bar Cart
By Alexis Morillo
25 Inspiring Quotes From Black Women To Celebrate Black History Month
By Kyli Rodriguez-Cayro and JR Thorpe
Twitter Has *A Lot* To Say About The "Single Penalty”
By Sam Ramsden
24 History-Making Black Women You Probably Didn't Learn About In School
By Ayana Lage and JR Thorpe
Get Even More From Bustle — Sign Up For The Newsletter
From hair trends to relationship advice, our daily newsletter has everything you need to sound like a person who’s on TikTok, even if you aren’t.