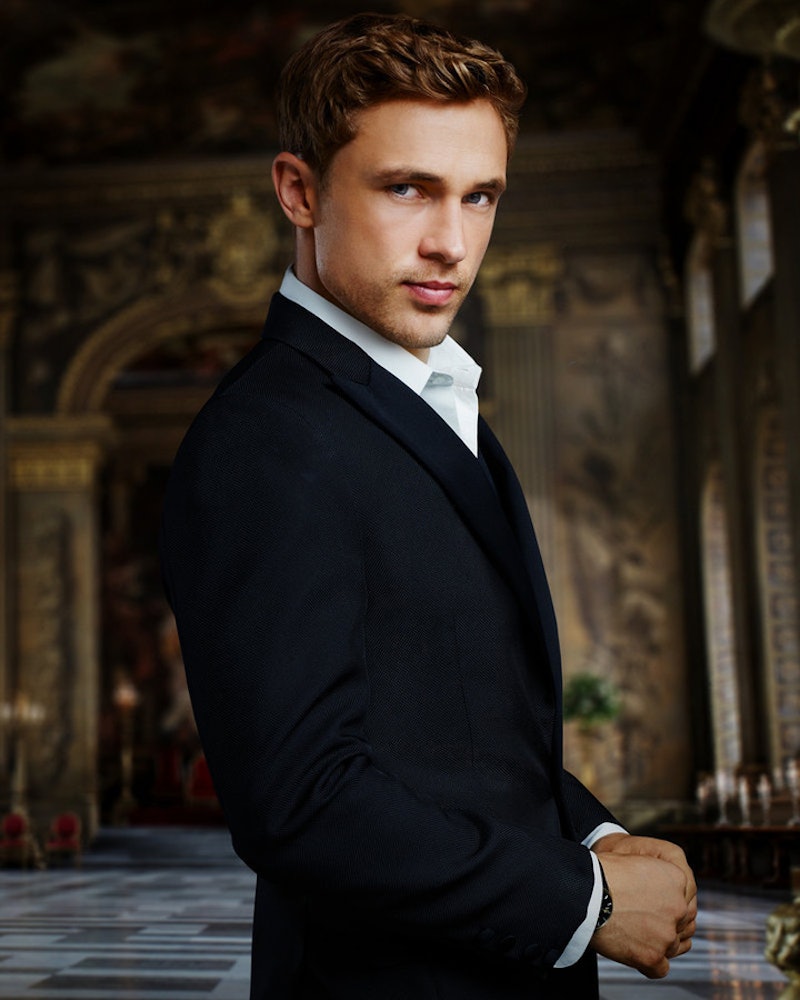 Like any good drama, The Royals knows how to keep its viewers wanting more. Whether it's through shocking pregnancy reveals (King Cyrus is going to be a daddy again!) or in the form of mysterious Domino logos, The Royals Season 1 finale found many ways of keeping us intrigued and longing for the show's return. So now that The Royals Season 2 premiere is almost upon us, I thought I'd use what little time we have left to try and figure out what the Domino symbol actually means and how it will factor into the storyline moving forward.

For those of you who need a bit of a refresher, this latest plot development was showcased multiple times throughout the finale. It first popped up in a letter addressed to Queen Helena, then again on a pendant around Prince Liam's neck. (He oddly didn't even realize it was there until Ophelia noticed that his necklace looked different.) And last but certainly not least, it made a brief cameo on a flag just outside of the palace shortly after King Simon's death. And while Queen Helena did not look all that thrilled about seeing it yet again, I think it's safe to say that she probably knows what this cryptic logo is supposed to represent.

It's hard to make any outright assumptions about who or what Domino is considering we know almost zero information about it. However, given the recent reveal surround Robert's death (which wasn't a suicide after all), I think Domino is actually a secret organization run by those who want to take down the monarchy. Robert's killer, Brandon Boone, told Eleanor and Jasper that his major had ordered him to take Robert out on behalf of a secret group and make it look like a suicide. But now that the major has gone missing, Boone is scared for his own safety. There's no way Domino isn't connected to all of this in some way.

Perhaps killing Robert was just their first step toward ruining the monarchy. Robert was, after all, the first one in line for the throne after Simon's reign (who also just so happens to be dead). That can't be a coincidence. For all we know, this Domino group could be responsible for both of these murders. And perhaps the symbol was meant to serve as a warning to Queen Helena. If she were to try and reinstate Liam and Eleanor back into the monarchy (since they could still be Simon's biological heirs), then their lives would also be in danger. As villainous as the Queen likes to portray herself, it would be nice if her devious actions were all apart of trying to protect her children, so they don't suffer the same fate as Robert and Simon.

But again, this is all pretty much conjecture since details about Domino remain extremely scarce. For all I know, this could just be a British pizza company that is persistent on getting some royal backing. (OK, so this is probably not true, but you never know!) We've all heard of the term "The Domino Effect" before. So perhaps that represents the organization's ultimate goal. Much like a house of cards, if one piece (of the monarchy) gets knocked down, the rest are bound to follow suit. Which means our beloved characters' troubles have only just begun.

And to learn more about The Royals Season 2, this Bustle video has some juicy spoilers from the cast themselves!