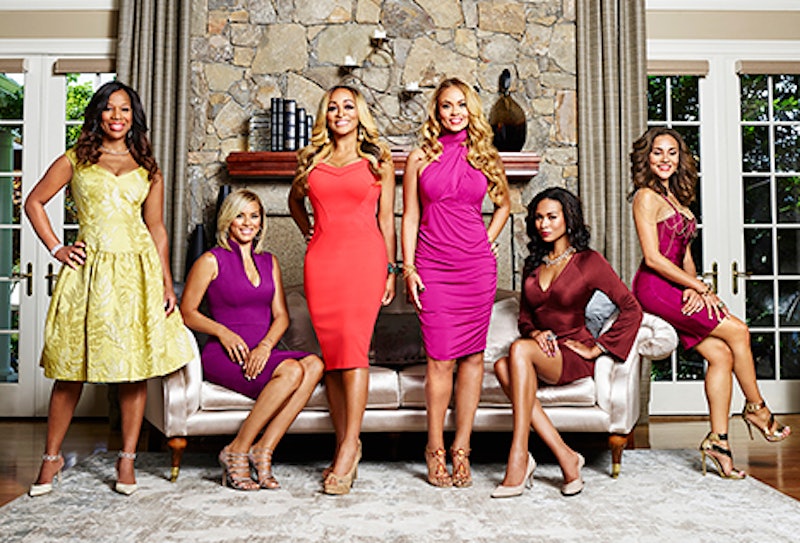 I'll admit it: I used to think the entire Real Housewives franchise was a joke. Who wants to watch a bunch of rich housewives complain about how terrible their lives are and fight with each other? Well, at this point, me. I'm totally addicted. The Real Housewives of New York City is definitely my number one jam, but I'm partial to Beverly Hills and New Jersey, as well. And now that there are going to be two new Real Housewives series — Potomac and Dallas — I've basically resigned myself to not having a life anymore, because it's all going to be spent in front of the TV watching them. Ugh, the drama — it's downright delicious. Sure, Potomac and Dallas were unexpected additions to the Bravo franchise, but I think they can bring something different to the family, and I can't wait to see it.

The Potomac season is apparently going "take [us] by surprise," while the Dallas season will give the Real Housewives franchise a "Southern twist" and both of those things sound amazing. In addition to increasing the Housewives' diversity factor (which, let's be honest, was long overdue), it also takes the focus away from some of the bigger, more well-known cities and allows some other up-and-coming locations shine.

Dallas is the bigger and more populous of the two new cities, and is a great choice for shooting the show. Texans are almost their own American sub-culture and not only will the Dallas ladies likely bring some serious sass to the franchise, but it'll also bring the Texas lifestyle into the mainstream and put the city even more on the map than it already is. As for Potomac, the wealthy Maryland city might be new to many, but it won't be for long. The potential both of these shows have to really round out the Real Housewives series is phenomenal if handled right, that's for sure.

While New York and Beverly Hills are pretty much on equal footing when it comes to drama, New Jersey was almost like the indie little sister NYC — a little bit naughtier, slightly underestimated, but just as entertaining. Atlanta is almost its own show altogether, though it still had the classic Real Housewives in-fighting and snarkiness between the ladies on it. What I hope Potomac and Dallas bring is a little something different — perhaps a bit more distinctness in terms of personality due to where they're from.

The Real Housewives of Potomac is due to premiere first, and now that we've seen the cast, I'm so excited to see what they bring to the table. Whatever it is, something tells me they'll fit in just fine, and maybe even pave their own new path.