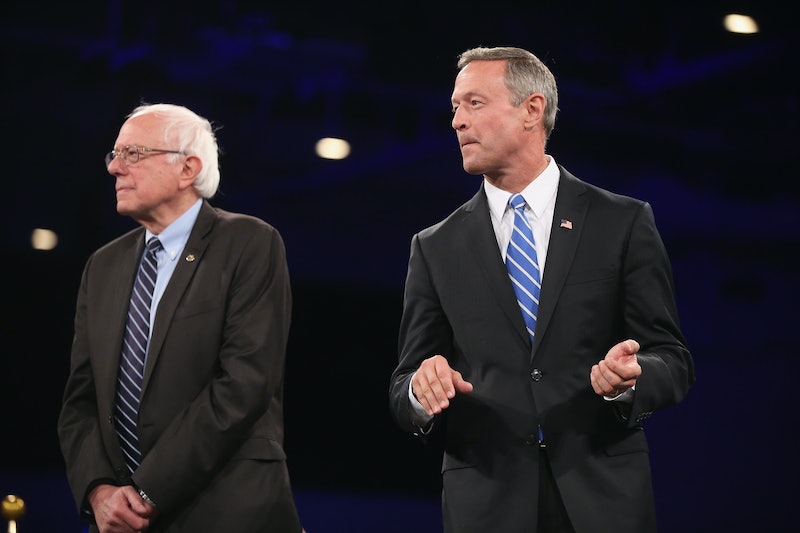 In recent weeks, Vermont Sen. Bernie Sanders has gone on the offensive against former Secretary of State Hillary Clinton, as both are competing for the 2016 Democratic presidential nomination. Earlier this month, Sanders told The Boston Globe's editorial board that he disagrees with Clinton "on virtually everything." But at the Democratic debates as well as at Rachel Maddow's Democratic forum, former Maryland Gov. Martin O'Malley, who's also vying for the Democratic primary nomination, has proven himself a formidable opponent to Sanders and Clinton. So why is Sanders focused on attacking Clinton, instead of O'Malley? The Vermont senator and former Maryland governor have similar voter bases, so Sanders should be devoting more effort to going on the offensive against O'Malley.

A New York Times/CBS News poll released Thursday showed Clinton leading both Sanders and O'Malley among likely Democratic primary voters. Fifty-two percent of the poll respondents favored Clinton, while 33 percent favored Sanders, and just 5 percent favored O'Malley. Still, in a field with only three competitors — especially compared with the number of candidates competing for the Republican primary nomination — Sanders could afford to devote more of his campaign efforts into knocking O'Malley, and not just Clinton.

The Times' poll found that half of respondents thought it was still too early in the 2016 election season to decide for certain who they'd vote for next year. O'Malley could still gain significant support, especially if he does well at Saturday's Democratic primary debate. It's still early in the campaign season, and Sanders shouldn't discount O'Malley as an unworthy opponent. As InsideGov.com notes, Sanders and O'Malley agree on many issues, though O'Malley is slightly more moderate. That may be a boon for Sanders' campaign among liberals, but it could also help O'Malley gain support among independent and moderate voters.

For his part, O'Malley hasn't been afraid to attack Sanders. During Rachel Maddow's Democratic forum on MSNBC last Friday, O'Malley said he was a "lifelong Democrat," likely referring to the fact that Sanders is an Independent senator who is running for the Democratic primary nomination. O'Malley also claimed that Sanders tried to find a primary challenger for Obama in the 2012 elections. Sanders, meanwhile, rejected O'Malley's claims as "categorically false." At Saturday's debate, it would be a good idea for Sanders to get in a jab at O'Malley in return, even if that's in addition to discussing Clinton's weaknesses, too.

More like this
Monica Lewinsky Wants Beyoncé To Change “Partition” Lyrics Amid Recent Song Edits
By Grace Wehniainen
Christina Aguilera Took A Powerful Stand At Brighton Pride
By Sam Ramsden
Are John Legend & Kanye West Still Friends? The Singer’s Latest Update Is Candid
By Brad Witter
'Scream’s Courteney Cox Has Broken A Major Horror Record
By Sophie McEvoy
Get Even More From Bustle — Sign Up For The Newsletter