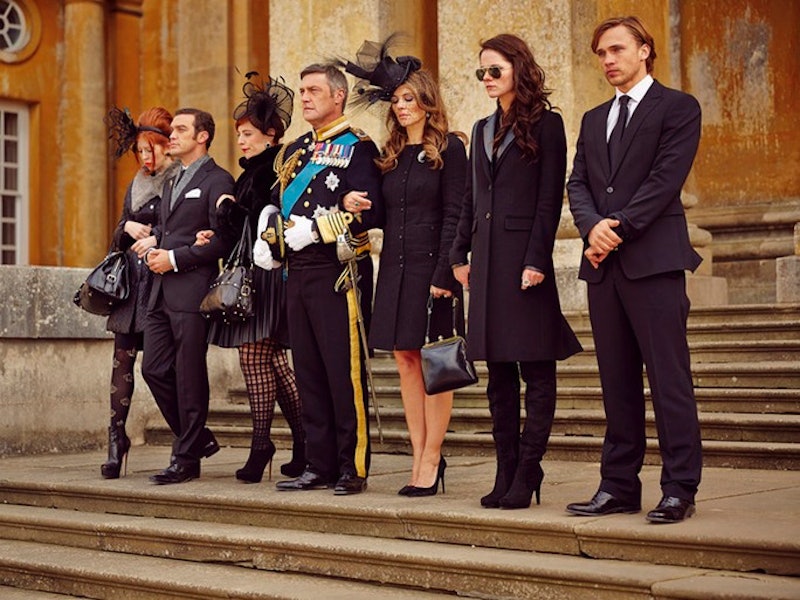 It's hard to believe that in just a few hours time we'll be knee (or perhaps even neck) deep into all the drama that The Royals Season 2 premiere has to offer. Because while the promos and photos have managed to somewhat quench our thirst for drama over these long and excruciating months, nothing can beat experiencing it all firsthand. And considering where things left off last year, the series has a lot of ground to cover and juicy secrets to work with. Like that whole mysterious Domino symbol, for example. Or a certain shocking pregnancy that we've suddenly been made aware of. But just in case any of this isn't really ringing any bells (after all, the finale feels like ages ago), I think it would be a good idea to recap everything that happened during The Royals ' first season.

Well, alright, maybe not every exact detail (otherwise we'll be here all day), but it's definitely worth recounting some of the major plot twists that went down throughout the season as well as the numerous betrayals that are beginning to bubble to the surface. This is a series that thrives on schemes and lies, and given what I've witnessed from the trailer alone, Season 2 will be sticking to the same motif. But before we dive headfirst back into all of that, let's not forget where everything left off…

The Fall Of Robert & Simon

The season may have started out with the family grieving over Prince Robert's apparent suicide, however, by the end of the season we come to learn what really happened to the former king-to-be. He was actually murdered by a Brandon Boone, who confessed his wrongdoing to Eleanor and Jasper during the finale. Why? Because he thinks the secret organization that ordered him to do this is now after him. Looks like the murderer is afraid of becoming the murderee. Speaking of which, Robert wasn't the only member of the monarch to lose his life that year. King Simon was also killed by an unknown assailant. It's unclear whether this hit came from the same organization that enacted Robert's demise, but if it is, then the rest of the family better start watching their backs.

Just when Prince Liam was gearing up to ascend to the throne in his father's stead, Queen Helena publicly revealed that Liam and Eleanor were not Simon's biological children, but rather the product of her secret affair with Alistair (who may or may not have been killed on Lucius' orders in the finale). And while the test results appeared to confirm that he was the father of Liam and Eleanor, we eventually learned that Dr. Cohen never actually tested their blood (it was all part of a scam to help put Cyrus on the throne), which means there's still a very good chance that they really are Simon's true heirs.

This Royal Family maid has not had the greatest working experience at the palace TBH. First, she was sexually harassed by Cyrus "Quid Pro Quo"-style, after he threatened to have her fired if she didn't perform sexual acts. She then attempted to kill him and got caught in the process. But instead of killing her, Cyrus offered her a deal: If she were to start spying on the king, then all would be forgiven. However, the truly shocking detail of her story arc came at the very end of the season when she showed up out of nowhere at the palace and revealed to the now-King Cyrus that she was pregnant with his child.

While it's true that Eleanor and Jasper's relationship has gone through some pretty dark times (like when he was blackmailing her to have sex with him using a nonexistent sex tape), real feelings began to develop from both parties throughout the course of the season. And now that Jasper is helping Eleanor find out the truth behind her brother Robert's death, I have a feeling it'll end up bringing them even closer together. Unfortunately, I can't say that same thing about Ophelia and Liam. Though the plan was to originally run away together, Liam decided that it would be best for them to go their separate ways for now, allowing Ophelia to pursue her dreams of becoming a dancer in NYC. But given that Gemma's family sponsors the dance company she was auditioning for, this dream could just as easily turn into her worst nightmare.

It's difficult to include this storyline since we still don't really know anything about what this is or what it means. However, given that this Domino symbol has shown up multiple times (once on a letter, once on a pendant, and once on a flag), I think it's going to become a very important plot development in the near future. Perhaps this is a secret organization that played a hand in Robert and Simon's deaths. (Much like the game, Domino's goal may be to knock down the members of this monarch, one by one.) Either way, considering the look of dread on Queen Helena's face when she sees this logo, it's safe to assume this Royal family's reign is in serious jeopardy.

And for more Royals content, check out Bustle's latest interview with the cast for some Season 2 spoilers!