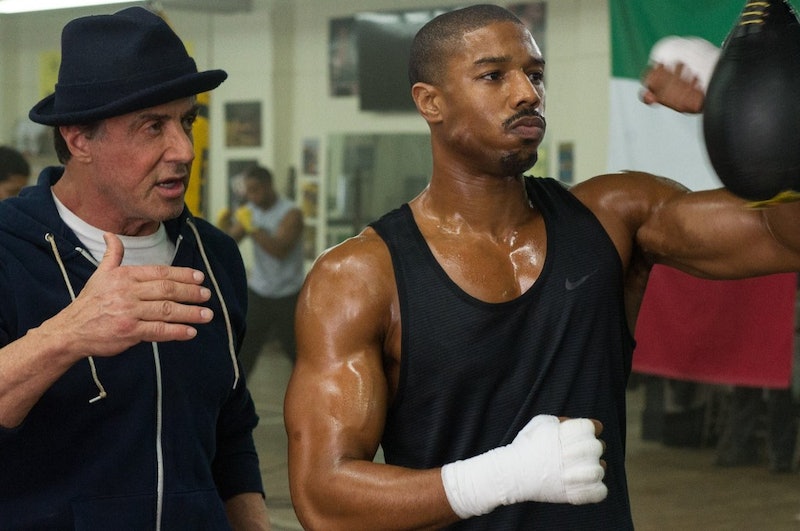 The new film Creed isn't just another boxing movie. It's actually the seventh film in the Rocky franchise, a series that began with the Oscar-winning 1976 film Rocky, which was about underdog Rocky Balboa taking on the world heavyweight champion, Apollo Creed. But in Creed, Apollo Creed is already dead — the movie instead focuses on his son, Adonis, played by Michael B. Jordan. Still, the film is practically guaranteed to be a success. It's joining the most successful sports movie franchise in existence, with three of the top five highest-grossing sports movies all being Rocky movies, and potentially setting the stage for a whole new spinoff franchise starring Adonis. But before anyone gets too attached to the character, they need to understand where he came from, and get the answer to the nagging question of how did Apollo Creed die.

Adonis never knew his father, a fact that's established pretty quickly in Creed. But that unfortunate situation was not Apollo's fault. Apollo died in the boxing ring, and while Creed makes sure to mention this, the movie never gets into the specifics of how that happened. As it turns out, Apollo Creed's death was both incredibly tragic and an amazing spectacle (in its own morbid way). You're not going to get this story in Creed, so here's what happened to Apollo Creed.

Apollo is a major figure in the Rocky series, right up there with Adrian, Paulie, and Rocky himself. In the first film, he's the heavyweight champion of the world, and defeats Rocky in the movie's climactic fight (yes, Rocky loses in the first movie). In Rocky II, Rocky and Apollo have a rematch, and this time Rocky wins. After his loss, the two become good friends, and Apollo retires from boxing. Then, in Rocky III, Apollo steps in to train Rocky for his match against Mr. T's Clubber Lang following the death of Rocky's trainer, Mickey. Finally, in Rocky IV, Apollo comes out of retirement to represent America and step into the ring against the most-prized fighter of the Soviet Union, Ivan Drago, in an exhibition match. It turns out to be a fatal mistake (though the James Brown performance makes for a pretty grand exit).

Apollo is confident and doesn't take the fight seriously, but Drago is an absolute monster. Creed is unable to hurt Drago throughout the fight, and once the big Russian starts connecting he proves to be too much for Creed to handle. Not content with just winning the fight when he is clearly in control, Drago never eases up, even pushing away the referee at one point. He literally punches Creed to death, in front of his wife, Rocky, and thousands of spectators.

It's a pretty graphic way to go, and is perhaps the saddest moment in the entire Rocky franchise. Rocky seeks revenge against Drago, which forms the plot for the rest of Rocky IV, but Creed's death still resonates as the film's hardest-hitting moment. Rocky IV takes place in 1985, meaning that Adonis likely was just born or not born at all when his father died, so it should be great to see him live up to the legacy of the father he never had a chance to meet. Sharp-eyed fans will even notice Adonis sporting his dad's familiar red, white, and blue trunks in the film's trailer (though hopefully they're a replica and not the pair Apollo died in).

Apollo Creed died 30 years ago, but his spirit (and affinity for names derived from Greek mythology) lives on in his son Adonis. Hopefully Creed serves as a nice epitaph for the character, and will inspire a whole new generation the way Apollo once did.