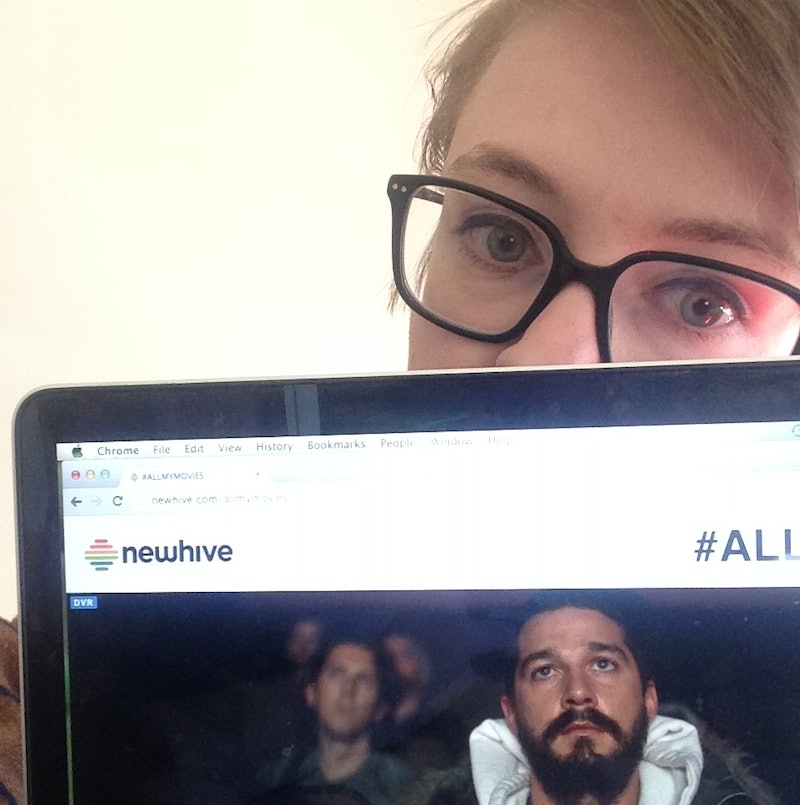 Decades from now, we will tell our children’s children about the time Shia LaBeouf embarked on a movie marathon for all the world to see. “For three whole days, he watched all of his feature films in reverse chronological order. And we could not stop watching him watch," we will say as we stare out the window at a live streaming video that isn't there. “We could not stop watching him watch.”

As of Tuesday afternoon, actor Shia LaBeouf has been camped out in front of a movie screen at NYC's Angelika Film Center. The reason: #ALLMYMOVIES, a performance art piece by LaBeouf, Rönkkö, & Turner. It's a free of charge, open to the public movie marathon that began with Man Down and will end with Breakfast with Einstein on Thursday evening.

For those of us who live on the opposite side of the country and/or can not make it to the Angelika Film Center this week, there is another way to check out the project: you can watch Shia watch movies via the #ALLMYMOVIES live feed. And that is exactly what I did.

I did not have the time (or the strength) to sit through the entire marathon, but I did have the time watch an entire movie along with Shia.I used a foolproof method to pick the flick: I closed my eyes, pointed at the #ALLMYMOVIES itinerary, and watched whatever my pointer finger landed on. The winner: Holes, the 2003 live-action adaptation of Louis Sachar’s novel of the same name.

Thursday morning, I fired up the live feed, started the movie at 12:02 p.m. ET/9:02 a.m. PT (per the itinerary), hoped my rental synched up with Shia's screening (unfortunately, the live feed does not have sound, so I may never know if my timing was correct), and I jotted down my observations. Here's what I saw while I watched Shia LaBeouf watch Holes:

12:00 p.m. ET/9:00 a.m. PT — A woman just held up a drawing in front of the live stream camera. She waved the drawing around a few times before placing it on Shia’s empty chair. OK?

12:08 p.m. ET/9:08 p.m. PT — Not six minutes in and I accidentally logged out of my Amazon account/out of my movie rental. Way to go, Rohwedder. And as I tried to pull the movie back up, my browser started acting like a goblin. It was an excruciating several minutes before I got the movie to play again. I jumped ahead a few minutes and crossed my fingers I was still synced up with the Shia screening.

12:25 p.m. ET/9:25 a.m. PT — I think someone walking down the row behind Shia accidentally hit Shia in the head with a tote bag. But Shia didn’t react. I assume it's because he's conserving his energy. Smart move.

12:36 p.m. ET/9:36 a.m. PT — Shia just displayed some really great movie theater etiquette: He didn’t hesitate to stand up when someone wanted to walk down the row. I really hate when people are jerks about letting other people by.

12:39 p.m. ET/9:39 a.m. PT — Shia laughed out loud during a dialogue-less, unfunny flashback. I can’t for the life of me figure out what he was laughing at. Either I am not perfectly synched up with Shia’s screening, or his sleep deprivation has kicked into overdrive.

12:52 p.m. ET/9:52 a.m. PT — For someone who has been up for three days straight, Shia doesn't look a mess. I applaud him. If I get less than 5 hours of sleep, I look like something someone found stuck to the bottom of their shoe.

12:54 p.m. ET/9:54 a.m. PT — Shia is a very attentive, very polite audience member. You'd never know he hasn't slept in days. If I was in his shoes, I'd probably snap and start chewing on the armrest or something.

1:01 p.m. ET/10:01 a.m. PT — Shia’s doing that thing where he keeps raising his eyebrows in order to prevent his eyes from closing. I know that move all too well; it was what got me through the History of Ancient Philosophy class I took in college.

1:08 p.m. ET/10:08 a.m. PT — Watching someone watch a movie is so hypnotic. Relaxing, even. Like staring at a fish tank. Or one of those classic Windows screen savers. I feel very chill right now.

1:29 p.m. ET/10:29 a.m. PT — Shia has curled up in the theater chair. I can't tell you how many times I've fallen asleep in a theater chair in that exact position. (What can I say? Midnight showings and I do not mix.)

You made it until the end of the movie, Shia.

We made until the end of the movie, Shia.