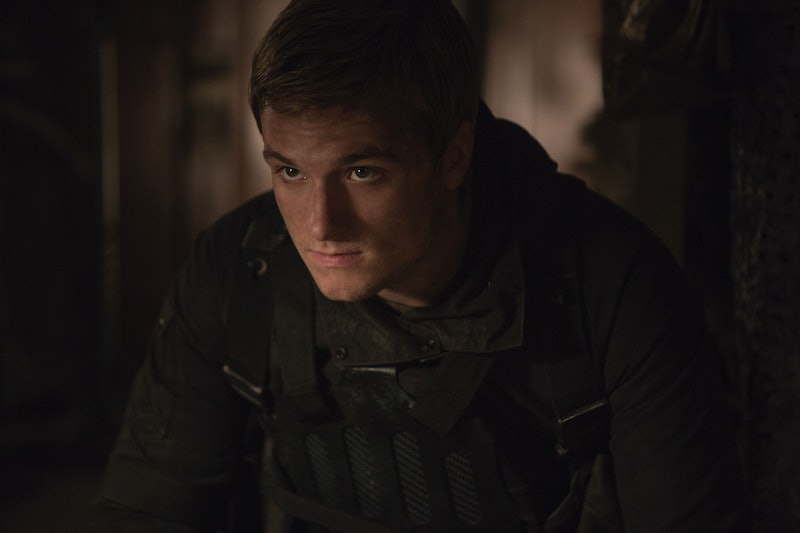 The last time audiences saw Peeta in The Hunger Games: Mockingjay Part 1, he didn't look so hot. He was confused and angry, and he practically almost ripped Katniss's head off. He also looked like he could afford to eat a burger or two. But what caused him to be so hysterical and malnourished? What happened to Peeta in the Capitol to make him go bonkers? Well, it's a combination of things, which includes torture and brainwashing.

First off, he and Johanna were captured by the Capitol at the end of Catching Fire during all of that Quarter Quell mayhem. But fans don't see him again until he's getting interviewed by Caesar Flickerman on TV during Mockingjay Part 1 . Even then, he has some crazy eyes and is in desperate need of some In and Out. We obviously know something is up because at the end of the interview he warns Katniss and the rebellion about the Capitol's intent to bomb District 13. This doesn't sit well with the Capitol, obviously. After the interview ends, they give him a cruel beating — but it's later learned that's not all that they give him.

After a covert mission where Peeta and Johanna are rescued, he is contained because he really isn't right in the head. Beetee explains that Peeta was put through fear conditioning using tracker jacker venom. In other words, the Capitol messed him up. They stripped his identity down by beating him, shocking him and doing whatever it took to put him in a dissociative state. To make matters worse, they made him redirect his fear and suffering to something else — and that something else was Katniss.

All the conditioning and torture done by the Capitol convinces Peeta that Katniss is a threat and that she killed his family. Essentially they've turned him into a weapon, set out on destroying the enemy — Katniss.

It's no secret that the Capitol wasn't exactly giving Peeta five-star celebrity treatment while he was being held prisoner. At the very end of Mockingjay Part 1, we see him strapped to a bed, wildly lashing about while Katniss looks at him in tears. The Capitol may be evil, but they are certainly strategic and know how to fight a war.

In the books and in the movie, the specific torture that Peeta goes through is left to the imagination. Readers don't get to read the gory details and moviegoing audiences don't get to see it besides the aftermath of Peeta's outbursts of hysteria. It's a solid decision, although seeing the torture and brainwashing would have made for great dramatic effect and probably an R-rating.

But don't fret! All hope is not loss for Katniss and Peeta. There is a silver lining to all of this insanity — albeit a very small one. Beetee tells Katniss and the gang know that the conditioning can be reversed, but it's a difficult process. It's not exactly an easy thing to un-teach fear. In the book, Peeta slowly gets back to normal after some serious stumbles and mishaps. As for the movie, let's just hope things follow suit so that he and Katniss can have their happily every after. But if you're Team Gale, let's hope she somehow ends up with him without compromising Peeta's mental health. Either way, I just want everyone to be happy... and for the Capitol to burn to the ground.