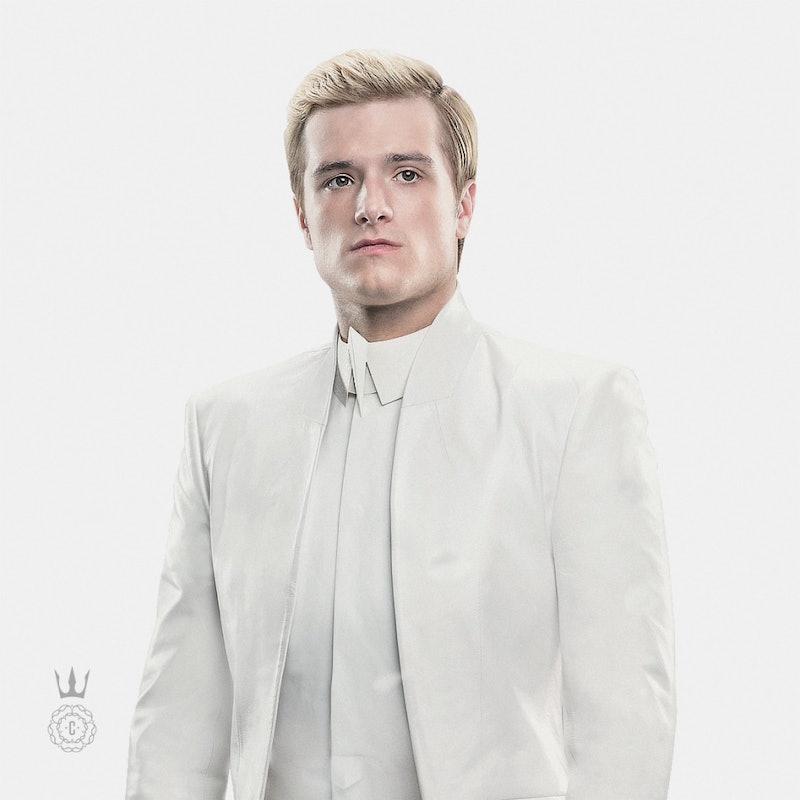 Warning. Lots of spoilers ahead. Peeta really got the short end of the stick in Mockingjay Part 1. Fans got to see all of the depravity, but were robbed of any resolution as we must wait another year for the final film to premiere. But fortunately we have the book to clue us in on what will happen to Peeta in Mockingjay Part 2, and the good news is he does get better, even though it's a slow process.

Mockingjay Part 1 ended with Peeta's rescue from the Capitol. Only after bringing him to District 13 did they discover that Peeta had been tortured beyond recognition. Being hijacked has replaced Peeta's fond memories of Katniss and shaded them with doubt and fear, effectively turning him into a weapon to be used against her. The final scene shows Katniss watching Peeta thrash against his restraints, with all signs of the sweet baker's boy seemingly gone.

But fortunately Mockingjay Part 2 should be a little bit kinder to Peeta overall. He doesn't get off scot free and his recovery is a slow process, for sure. But there is a happy ending in there somewhere. If the film follows the course of the novel here's what we can expect to see as far as Peeta's recovery in the final film.

In the novel, his doctors employ a series of tactics to try to undo what the Capitol did to Peeta's brain. They bring in Delly Cartwright, a friend from his childhood, to unlock positive memories. They dose him with morphling and make him watch clips of Katniss to induce positive feelings rather fearful ones. They even try letting him bake and decorate Finnick and Annie's wedding cake to reawaken his former artist/baker self.

I'm not sure if these are the same tactics the movie will employ. Especially because they're not big on including District 12 citizens. They cut Katniss' friend Madge from the first film, so Delly may not be included either. But I think we can rest assured that whatever the movie chooses to do, we will see attempts at making Peeta better.

BEING SENT INTO BATTLE

This one is a little bit of a setback for Peeta because Katniss believes President Coin sent him only to kill her and turn her into the martyr the cause needs. Throughout the course of battle Peeta kills a member of their squad and it's pretty horrible. No doubt the movie will capitalize on that because Josh Hutcherson's range of emotions is fantastic and should be employed whenever possible.

A SELF AWARENESS OF HIS CURRENT STATE

After killing someone, Peeta finally starts to understand that something is wrong with him. He says in the book, “I just murdered a member of our squad … I’ve never seen myself like that before. Katniss is right. I’m the monster. I’m the mutt. I’m the one snow has turned into a weapon!”

But as sad as Peeta coming to that realization is, it's also encouraging. It means he's recovered enough to see what the Capitol has done to him. He can't control it yet, but he's on his way to overcoming it.

ATTEMPTS TO GAIN UNDERSTANDING ABOUT HIS CONDITION

As Peeta becomes less of a threat throughout the final war mission, he begins to play "Real or Not Real" with his fellow soldiers to try to sort through the memories in his head: the ones the Capitol planted and the ones that are actually his. I hope the film includes this game because it's instrumental to the adorable way Peeta and Katniss later tell each other that they're in love.

Katniss basically cures Peeta of his hijacked self with a kiss. I mean, he's not totally fixed but something definitely goes down. It's described in the book as such:

"Peeta shakes his head. "I'm losing it. I'll go mad. Like them."Like the mutts. Like a rabid beast bent on ripping my throat out. And here, finally here in this place, in these circumstances, I will really have to kill him. And Snow will win. Hot, bitter hatred courses through me. Snow has won too much already today.It's a long shot, it's suicide maybe, but I do the only thing I can think of. I lean in and kiss Peeta full on the mouth. His whole body starts shuddering, but I keep my lips pressed to his until I have to come up for air. My hands slide up his wrists to clasp his. "Don't let him take you from me ... Stay with me."His pupils contract to pinpoints, dilate again rapidly, and then return to something resembling normalcy."Always," he murmurs.

Near the end of the novel when Katniss shoots President Coin, she goes to take her cyanide pill and kill herself, but Peeta stops her before she gets the chance.

I raise my left arm and twist my neck down to rip off the pill on my sleeve. Instead my teeth sink into flesh. I yank my head back in confusion to find myself looking into Peeta's eyes, only now they hold my gaze. Blood runs from the teeth marks on the hand he clamped over my nightlock. "Let me go!" I snarl at him, trying to wrest my arm from his grasp. "I can't," he says.

There are few things I love more than the fact that no matter what the Capitol did, Peeta ended up being the one who saved Katniss, not the one who destroyed her.

GROWING BACK TOGETHER WITH KATNISS

When the pair finally comes back to District 12 a lot has happened. Prim is dead, they're both badly injured, and yet they have each other. As they recover from the trauma of the war, they fall into a routine. Peeta bakes and Katniss hunts and they work together writing a book to remember all who lost their lives in the name of freedom. And slowly they grow back together.

Peeta and Katniss eventually have a daughter and a son who know not of the life of hardship their parents grew up in. That's pretty encouraging as it means peace has existed for at least 20 years or so. See? It's definitely a process but the end is almost worth the arduous journey. Hang in there Peeta, I promise it all ends up OK.