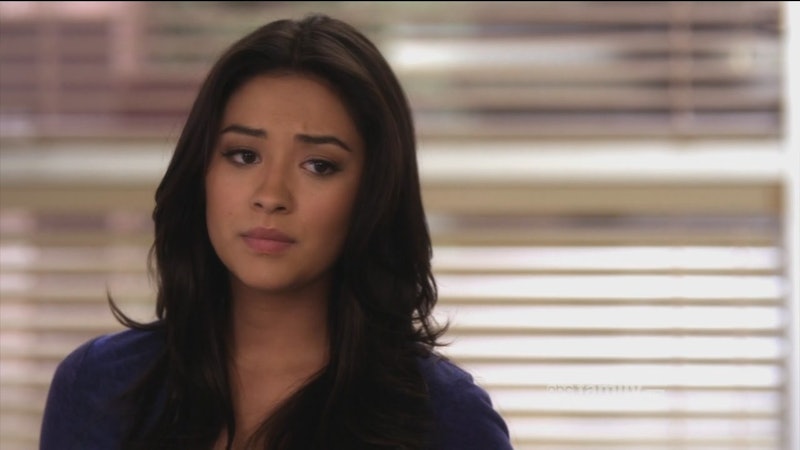 So much has changed over the course of six seasons on Pretty Little Liars, and we're not just talking about the hair cuts. (Though those do seem to get better with each passing episode, and, miraculously, after the girls were all put in a demented dollhouse by A. Looking at you, Aria.) While the girls may now know who A is and are ready to leave Rosewood for the real, hopefully less dangerous world, if there's one thing that's really changed on Pretty Little Liars, it's the girls themselves. Being tortured by A certainly can do a number on one's personality, and if there's one Liar who has definitely come out stronger on the other side, it's the former "weakest link" Emily Fields.

While all of the Liars have been tortured by A in their own ways, it seems that Emily always gets the shortest end of the stick. (She is the one who got locked in a box headed for a chainsaw, after all.) Really, it's not surprising that Emily has changed over the years: circumstances have all but demanded she step up and take charge of her life. Season 1 Emily may have been too afraid to do it, but Season 6 Emily? This girl has got this.

1. Put Up With Someone Who Treats Her As Terribly As Ben

Ugh, Ben. What a tool. Ben may be a guy (and therefore not technically Emily's type) but he also made Emily feel like crap 24/7 and then assaulted her in the locker room after she rejected him. Emily has learned a lot about self-worth since dating Ben, likely because she's finally able to be honest with herself. Speaking of...

2. Lie About Her Sexuality

Emily felt that she had to hide the fact that she was attracted to women from everyone in her life, and it caused her serious stress. Though it took her mom a while to come around, Emily's friends were immediately supportive. Now, Em never hides who she is, because life is just too short.

Ali was Emily's first love, and while she will always have a soft spot for her, she's definitely not delusional anymore about Ali's shortcomings. The proof? Emily was willing to believe that Ali was A, and out to hurt the Liars — whom, ultimately, she put first. Emily and Ali may be close friends again, but Emily isn't going to blindly follow her (or anyone) ever again.

4. Show Up To A School Dance With Toby

Not because she doesn't love Toby, just because, you know, it's weird to take your best friend's boyfriend on a date.

5. Keep Major Secrets From The Other Girls

In Season 1, Emily was so afraid of anyone finding out about her romantic feelings towards Ali that she didn't tell the girls about the not-so-nice letter she wrote Ali after she was cruelly rejected by her. When Detective Wilden used the letter against Emily, she confessed everything — and since realized it's way better to keep your friends in the loop, especially when the cops are trying to get you arrested for everything.

Hey, remember how Paige tried to drown Emily once upon a time? They're probably endgame, now.

7. Be The "Weakest Link" That A Can Break

Emily has been through hell and back. A (a.k.a. Mona and Cece) thought she was the easiest girl to crack, but what they didn't realize was that she became a whole lot stronger in the broken places. Now, Emily isn't afraid to fight back against whatever A (or, you know, life) throws her way.

Emily has certainly changed over the years — who knows where she'll be five years down the road when Pretty Little Liars returns?

More like this
The 'PLL: Original Sin' Creators Say A’s Identity Will Be “Very Clear” By The Season Finale
By Alyssa Lapid
Every Horror Movie Reference In The 'PLL: Original Sin' Premiere
By Alyssa Lapid
Everything To Know About Netflix’s 'Never Have I Ever' Season 4
By Jack Irvin and Gabrielle Bondi
Here’s How You Can Watch Season 3 Of 'Never Have I Ever' In The UK
By Frances Stewart
Get Even More From Bustle — Sign Up For The Newsletter