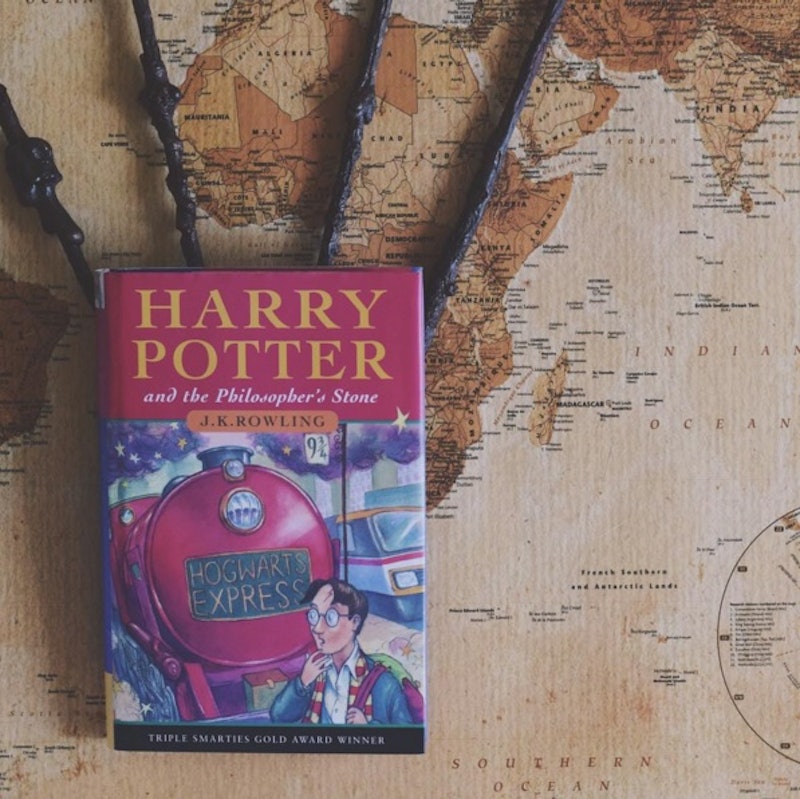 It's no secret that the Harry Potter books are some of the best books of all time, but when you have already read the series, more than once, it might be time to move on to something new. Despite what you think, there are other authors to read if you love the Harry Potter books. J. K. Rowling, no matter how amazing she is, isn't the only author out there who has written amazing, magical, wonderful books for you to enjoy.

If you love Harry Potter, you like to be swept up in what you're reading. You want a story that excites you, that moves you, and maybe even one that makes you cry. You want a book that you can't stop thinking about and that you can talk with your friends about for hours. If you like reading Rowling's series, you probably like magic, mystery, and fantasy. You want a book that features mythical creatures, epic quests, and unbelievable adventure. You probably appreciate stories with loyal friends, wise mentors, and tales of undying love. Even though Rowling does it best, there are other authors that can do the same things, I promise.

Here are 11 authors to read if you like Harry Potter, because yes, there are other books out there.

If you like the Harry Potter books but are looking for something geared toward adults, Susanna Clarke could be just the author for you. Her writing includes fantasy, science fiction, and alternative history, and each of her stories — whether it is the almost 800-page Johnathan Strange & Mr. Norell or one of her short stories — are rich in detail and bursting with magic and wonder. Clarke writes the kind of stories you can get completely lost in. Sound familiar?

With over 100 books under his belt, Michael Scott has done it all — adult fiction, children's books, YA, fantasy, science fiction, folklore, you name it. No matter what he is writing, though, it features exciting adventure and unparalleled storytelling. His children's series, The Secrets of the Immortal Nicholas Flamel, has everything you loved about Harry Potter, including magic, mystery, and a constant battle of good versus evil. You will love it, I promise.

Another author who writes for all ages, Cornelia Funke is a German writer whose books have been translated into over 30 languages. Her novels include stories of fantastic creatures (including dragons), secret portals into other worlds, and books coming to life. You are bound to find something you like by this amazing fantasy writer. Try Inkheart if you're new to Funke, because literally everyone adores it.

I probably don't have to convince you of Neil Gaiman's talent. Chances are if you have read something by him, you love him just as much as I do. If you're a fan of the Harry Potter books, Gaiman is right up your alley. His many works — which range from comic books to novels to graphic novels — include magical elements, dark fantasies, and unforgettable characters. In other words, all the makings of an incredible read worthy of shelving next to Rowling's series.

Best known for his work in children's fantasy, Australian-born author Garth Nix knows a thing or two about magic, supernatural creatures, and the complicated nature of death. He is probably best known for his Abhorsen series, which features spells gone wrong, daughters fighting for their fathers, refugees and rebels, and so much detail, you could discuss the each book for hours.

Harry Potter was a lot of things, but the fact that he was an orphan played a huge part in his story. If his family dynamic and surrounding mystery interested you, then Ransom Riggs, author of Miss Peregrine's Home for Peculiar Children , could become one of your new favorite authors. His storytelling is shrouded in mystery and magic and set in a world where nothing is quite as it seems. Trust me, if you like Harry Potter, you'll truly enjoy Riggs.

The Lion, the Witch, and the Wardrobe, $6, amazon.com

The author of one of the most popular children's series of all time, C. S. Lewis writes incredible, engrossing stories that span different generations and alternate worlds. His Chronicles of Narnia books have everything a Harry Potter fan is looking for: brave children, heartwarming mentors, daring adventures, questions of morality, mythical creatures, and epic battles between good and evil. Not to mention, if you like Harry Potter for the books and the movies, there are plenty of adaptations of Lewis's work to keep you entertained for hours.

If you love Hogwarts, then you will love the world of a magical college that Lev Grossman creates for his books. Grossman — who has said that "Writing about magic is how I really found my voice" — tells stories of sorcery, perilous journeys, and secret revelations, but he also captures the heartaches and struggles of coming of age, because whether you are magical or not, growing up isn't easy.

Speaking of magical schools and growing up, Rick Riordan has a knack for telling a very human story in a completely fantastical world. His Percy Jackson series, not unlike the Harry Potter series, takes place largely at a camp for demigods, and it stars a young boy living out a destiny that was largely unknown to him. Loyal friends, heroic quests, and the fate of the world resting on the shoulders of a teenager? Yeah, that's the stuff Harry Potter fans live for.

Though her books don't fall into the fantasy category, Lois Lowry's writing will delight any Harry Potter fan. Her books are about human connection between friends, family, and complete strangers; what those connections mean; and how they shape our lives and the world around us. Her stories are moving, sometimes uplifting, often heartbreaking, and her characters are sympathetic and relatable, even if they live in a world entirely unlike your own. A little different from the other authors on the list, Lowry will still blow you away.

Although the film adaptation of his series didn't take off nearly as well as Harry Potter's, Philip Pullman is an author that any Harry Potter fan will love. His writing can only be described as epic, and the fantastical world he creates in his novels are fantastic and wholly engrossing. Trust me, if you like the world-building, the adventure, and the moral battles in the Harry Potter series, you'll be head over heels for Pullman.