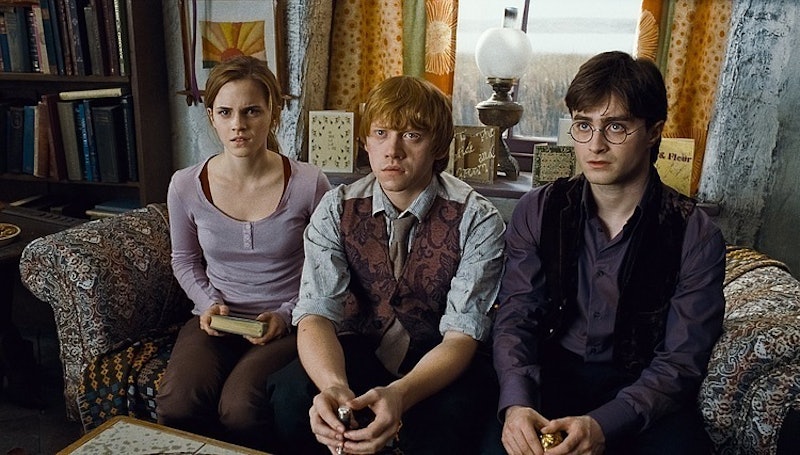 Because the great thing about re-reading the Harry Potter series is that you get something new out of it every time. I remember reading The Order of the Phoenix as an angsty teen thinking, yeah, Harry, everyone else is stupid. But when I re-read a few years later I felt much more like, please calm down and stop yelling at your friends, Harry.

Plus, every time you re-read it, you pick up on some new piece of foreshadowing, like when they first find that locket in Grimmauld Place (and then you hurl your book at the wall out of frustration because they could have avoided so much horcrux-related grief). Or you realize that the Wizarding World is severly lacking in something, like lawyers or sex-ed. Or you just weep uncontrollably because Sirius dies every time. Even if you're a Potter aficionado, there's always some little detail that you missed out on in the first reading (or first 10 readings). With Fantastic Beasts and Where to Find Them and The Cursed Child looming in the not-so-distant future, now is the time to have every minute detail of the original series fresh in your mind.

I mean, yeah, you already knew that Harry, Ron, and Hermione were only 11 in the first book (even though that still seems way too young to be fighting trolls and three-headed dogs). But then you realize that Lily and James were only 21 when they died — so Lily was only 19 when she got pregnant Harry. And then you feel even sadder about everything forever.

2. The Centaurs Are Always Right

We all remember that first trip into the Forbidden Forest back in Harry's first year. When Harry had a close brush with Voldemort (what else is new)? And Firenze the centaur saved him? But then Bane the centaur was all upset, because he thought Firenze was interfering with fate? Because he saw in the stars that Harry was destined to be killed by Voldemort in the Forbidden Forest? Yeah. Bane was totally right. Just seven years ahead of schedule. Sorry we doubted you, Bane.

So back in their first year, Malfoy has an eagle owl that brings him sweets from his doting parents. Seems innocent enough, even for the Malfoys. But then, in Goblet of Fire, Harry is just chilling in the owlery, and he notices an eagle owl flying away from school. And later, in his dream, he's riding on the back of an eagle owl, taking a message to Voldemort. So that eagle owl he saw was almost definitely the Malfoys' owl, delivering messages from Barty Crouch Jr. to You-Know-Who himself. Creepy.

4. Why Doesn't Harry Use that Mirror to Talk to Sirius?

He gave you that magic mirror to contact him, Harry. And you didn't even use it, Harry. WE COULD HAVE HAD IT ALL, HARRY.

They're pretty identical, but not entirely. Even before George gets his ear blown off. If you pay close attention, Fred is almost always the one who speaks first, and it's usually Fred who's behind the nastier pranks. According to Ron, Fred was the one who transformed his teddy bear into a spider, giving him lifelong arachnophobia, and it was Fred who gave a little Ron an acid pop to eat, burning a hole in his tongue. George is still a prankster, but he seems to be the slightly more grounded of the two. Luckily, despite their differences, both of them totally survive the seventh book (and no amount of re-reads is going to shake me out of my denial).

6. Trelawney Is Always Right, Too

Yeah yeah, we all remember Trelawney's real predictions — but even as an old fraud, she got it right on occasion. In Prisoner of Azkaban, when Trelawney comes down to the Great Hall for Christmas breakfast, she claims that "when 13 dine together, the first to rise will be the first to die." Sure, whatever, Trelawney. Except that Dumbledore rises to greet her, and he's the next out of the 13 of them to die. The same proves true when Sirius rises first at a dinner at Grimmauld Place, and then when Lupin rises first at Mad-Eye Moody's wake.

I know you were a teenage boy, Harry, but man did you blow it on that one. The older I get, the more astounding Harry and Ron's lack of sensitivity becomes. I mean, Cho's boyfriend just died and you don't understand why she's crying, Harry? And let's not even get started on the whole Yule Ball fiasco with the Patil twins. Major props to Hermione for putting up with you for all those years.

I trust J.K. Rowling when she says there are about a thousand students at Hogwarts, but it sure feels like there are only eight Gryffindor kids in Harry's year so... how many kids go to this school? Because even if there are 10 kids per house per year, that comes out to fewer than 300 students in total. Maybe wizards just aren't great at math? (Also... was the girls' dorm in Harry's year just Hermione, Parvati, and Lavender? That feels like an awkward housing situation.)

9. Not All Slytherins Are Completely Evil

OK, so a lot of them are completely evil. But re-reading the books, you begin to realize that Harry's a bit of an unreliable narrator — he's a competitive kid who puts too much stock in the whole Gryffindor-vs-Slytherin rivalry. After all, Regulus Black turned out to be an alright guy. Slughorn's not evil so much as a coward, and even Snape is not the very worst human being ever to exist, I guess. Besides, Peter Pettigrew was a Gryffindor, and he turned out to be a nasty little rat.

10. Dumbledore Is a Little Shady

We know now that Dumbledore had a method to his madness. But still: Why would you make the Forbidden Forest off-limits, and then let kids have detention in the Forbidden Forest? Not to mention that oh-so-creepy moment in Goblet of Fire when Harry tells Dumbledore how Voldemort used his blood to resurrect himself, and Dumbledore has a gleam of something like triumph in his eyes, just for a second. Looking back, it's because Dumbledore's genius theory has proved true but... Dumbledore, please try to be less excited about your students being attacked by Lord Voldemort. We still love you but calm down.

More like this
'Bridgerton' S3 Teases Exciting Social Season For Penelope Featherington
By Bustle
‘The Mosquito Coast’ Book Ending Includes A Major Character’s Death
By Brad Witter
The 'Firefly Lane' Book Ending Teases Way More Tears To Come In 2023
By K.W. Colyard
The 'Lady Chatterley's Lover' Book Leaves Us With A Troubling Question
By Catharina Cheung
Get Even More From Bustle — Sign Up For The Newsletter