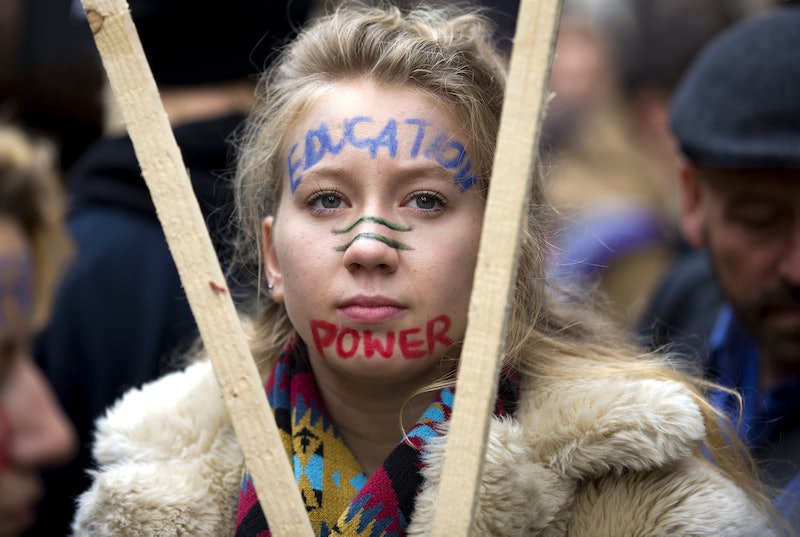 U.S. students gathered by the thousands on college campuses across the country Thursday in protest of high tuition costs, increasing student loan debt, and low wages for campus jobs. The movement, named the Million Student March by demonstrators, comes just three weeks after South African university students marched on the Parliament building in Cape Town in protest of — well — a lot of the same things. These students are an ocean apart, but America's #MillionStudentMarch and South Africa's #FeesMustFall campaigns have a whole lot in common.

Stateside students on Thursday marched on campuses in California, Texas, Chicago, and Massachusetts, among dozens of others, with three major demands in mind: a $15-per-hour minimum wage for campus workers, tuition-free public colleges, and cancellation of all existing student debt.

The total amount of outstanding student loan debt in the United States sits at $1.2 billion, according to the U.S. Consumer Financial Protection Bureau, and has more than doubled since 2006. And, according to Edvisors, the average 2015 graduate with student debt has more than $35,000 to pay back.

"Change starts when people demand it in the street. Not in the White House," demonstration co-founder Elan Axelbank told Reuters.

The similarities between the #MillionStudentMarch and the South African student protests, which began with an Oct. 23 march on Parliament, are striking. Protests on university campuses across South Africa began as a direct response to planned university fee increases of up to 11.5 percent, with organizers stating demands of a 0 percent increase in fees and the insourcing of outsourced workers on campuses. Protesters used the hashtag #FeesMustFall to promote their cause on social media, and soon expanded their demands to include an end-goal of free education.

In both countries, university-goers drew up their demands with specific focuses on making higher education more affordable for students across the two countries, as well as decreasing the vulnerability of workers on campuses. Tuition costs oftentimes present families or individual students with heavy financial burdens in America, where annual fees can be close to or more than household income. Similarly, average annual household income for black South Africans in 2011 was 60,613 rand, or $4,250, while yearly tuition fees can run more than 40,000 rand, or $2,800.

#FeesMustFall protesters saw a partial victory when South African President Jacob Zuma announced after several days of tumultuous demonstrations that tuition fees would not be increased. Government officials also stated a commission would be introduced to look into the possibility of insourcing workers.

And while #MillionStudentMarch protesters aren't seeing tangible results from their efforts just yet, lowering the education burden has been a pertinent issue for candidates on the 2016 campaign trail. Lead Democratic candidate Hillary Clinton unveiled a plan in August to streamline loan repayment plans for students and reduce overall debt, and candidate Bernie Sanders has often spoken of the need for tuition-free public college in the United States.