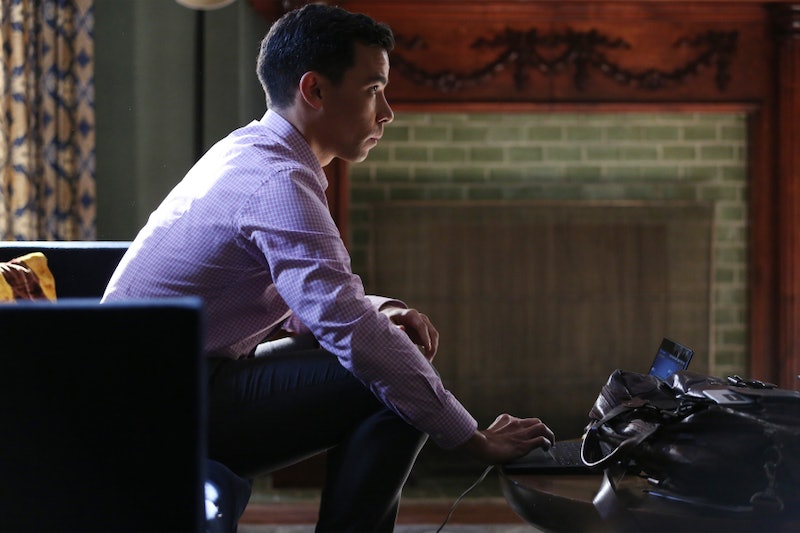 Well, there's no use crying over spilt milk on How to Get Away with Murder. After a rather abrupt and alarming cliffhanger where Phillip surprised Oliver in his apartment, it was revealed on Thursday that Oliver is A-OK. Not even A-OK, but like, he's 100 percent fine, doesn't have a scratch on him. But, just because Oliver was returned in one piece doesn't mean that we should go and put Phillip on the Keating Holiday Card mailer, because this guy is just as shady as he was when he first broke into Oliver's apartment, if not more so.

Despite the cliffhanger that Oliver was going to be hurt, or even worse, killed (admit it, you thought it for a second), within the first nine minutes of "Hi, I'm Phillip," Phillip and Oliver showed up to Annalise's office and surprised everyone with an in-good-health Oliver. I don't know if it was the fact that Phillip returned Oliver without any harm done, or if it was because he seemed totally normal, but Phillip seems totally normal. At least when he was with Annalise Keating and Co. He seemed fully aware that his rights were violated when Oliver hacked his computer, and he planned to press charges — like a normal human.

But, wait. Nothing really is as it seems on HTGAWM, is it? As the episode progressed — at this point, Oliver's abduction is a thing of the past and barely thought of, just like the many people that have died by the hands of the main cast — we learn that Phillip isn't so normal. His DNA matches the DNA at the crime scene and he's working with Catherine. YES, Catherine. The girl who said in this very same episode that she didn't know who he was.

We don't know what these two are up to at the moment, but one thing we can be confident in is that Oliver is safe, for now. He is at no bigger risk than anyone else working with Annalise, which is not saying much, because they're all at huge risk. Hopefully, Phillip will keep away from Oliver because Coliver is bae and he will not mess that up for me.