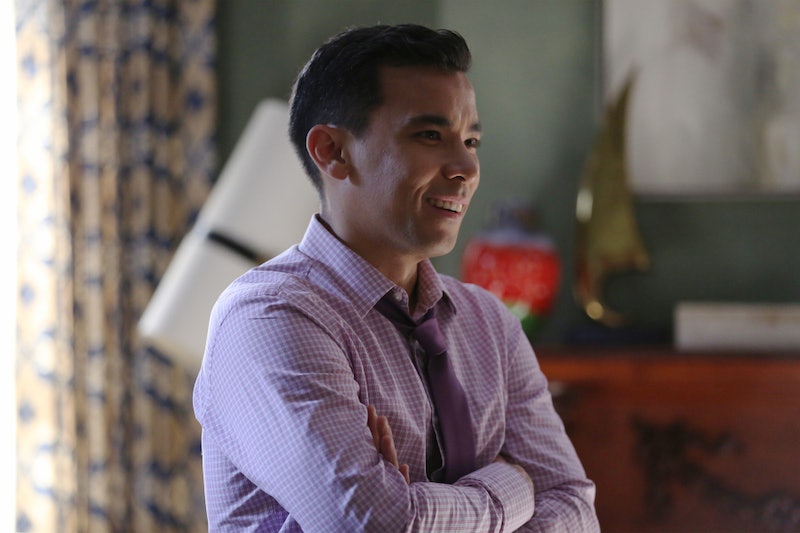 I could sense from the get go of this week's How To Get Away With Murder that Oliver would get in trouble. He was wayyy too involved in finding possible serial killer Phillip for his own good, and, what do you know? Now Oliver may be dead on HTGAWM thanks to that very same possible serial killer. See, Oliver played detective on this week's episode, trying to bait Phillip into going on a date with him to get his DNA to prove he killed the Hapstall parents. Connor, concerned boyfriend that he is, wouldn't let Oliver go and went on the date in his place while Oliver went to buy groceries.

Unfortunately for everyone involved, Phillip is like six steps ahead THANKS TO HIS HACKING OF OLIVER'S WEBCAM, and so he knew it was a trap and decided to pay Oliver a little visit. At the end of the episode Oliver drops the milk carton he just bought when he spots Phillip in his apartment, and that's the last we see of Oliver. Next week shows that Connor comes home, sees the milk, and immediately knows something's amiss. He thinks Oliver's been killed, but I think he's wrong... for now.

If this was the finale, I'd say yeah, he's dead. But, we have a few episodes to go before the winter hiatus and so I'm thinking that Phillip just kidnapped Oliver to use as leverage. Maybe to get everyone to drop the mission against making him out to be the Hapstall murderer. I think there's still a chance Oliver will die, but not just yet. All I can say is hopefully Connor gets to him in time.