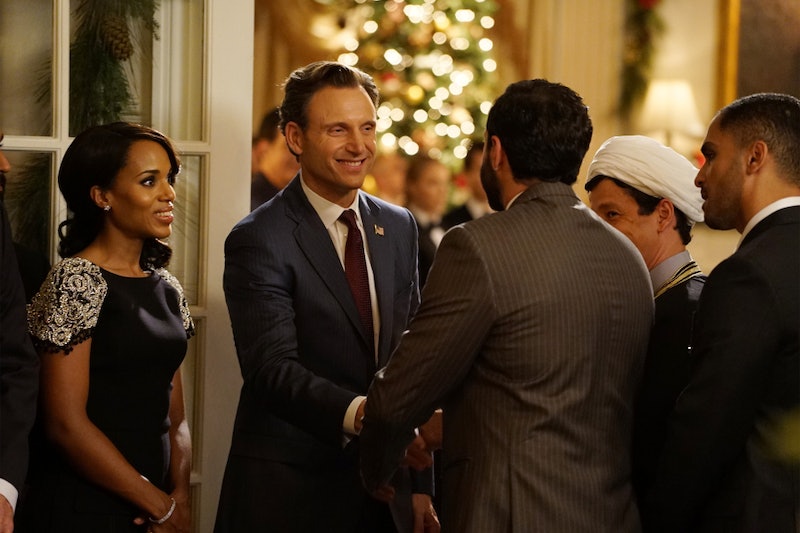 Well, we all knew this would happen eventually, right? Rowan Pope is free, and now, everybody knows who's responsible for it. Thanks to a secret investigation launched by Cyrus and David Rosen, Fitz found out that Olivia is the one responsible for letting Rowan out of jail — and naturally, this means he moved all her stuff into the White House.

As soon as the investigation revealed that it was Olivia, the FBI wasted no time arresting her and bringing her to one of those super scary underground all concrete cells, where she sat at a desk, handcuffed to her chair. Fitz hurried down there to hear her out, but as soon as she started talking, it was clear he didn't like what he was hearing.

At first, Fitz didn't actually believe that Olivia let Rowan out — mostly because she's not Mellie. And although I half expected Olivia to lie and say she wasn't the one responsible, she didn't. She told him straight up that she had something to do with it, even though it was only to prevent his impeachment. I would have loved to have heard her explanation for this, but of course, music played over her muted voice, and all we saw was Fitz looking heartbroken, crestfallen, and about a hundred other adjectives that all mean "disappointed." Eventually, he left her alone in her cell, crying.

But then, a twist: Olivia was moved into the White House, where she'd be safe. Wait, so what's happening now? I'm just as confused as you are, but there's one thing that's certain: Rowan is in for a world of pain. Because he has also been captured, and at the hands of Huck? Things aren't looking so good. Huck loves Olivia and has always been dedicated to her, and he knows the pain that Rowan has put so many people through, himself included. He also happens to be one of the most masterful torturers ever, so, GL on this one, Papa Pope.

And for now? Fitz and Olivia live on.