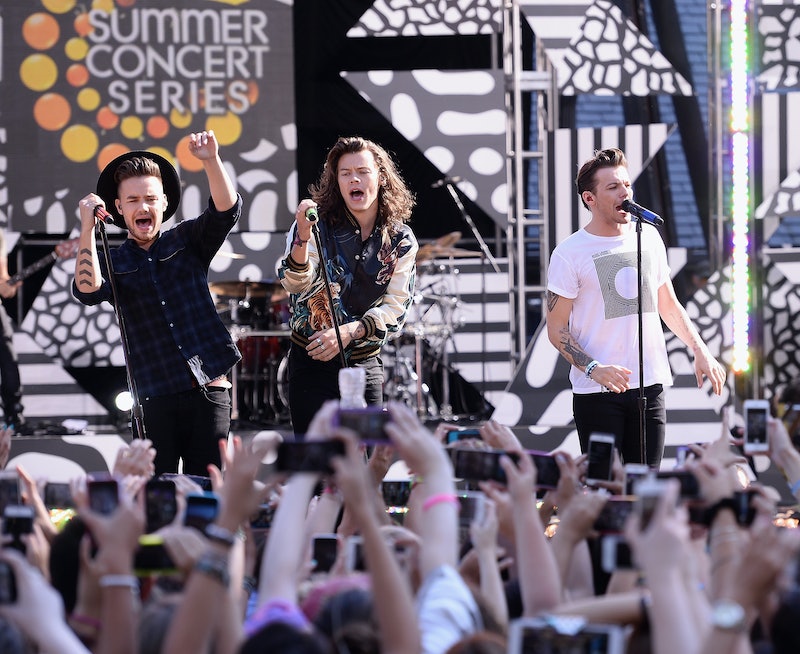 Friday saw the premiere of One Direction's much-anticipated new album, Made In the A.M. It's a bittersweet moment for fans of the four-piece British band: Made In the A.M. is their fifth full-length release in five years, and their last before they take a break for an undetermined amount of time, reportedly to relax and pursue side projects. Though 1D members Harry Styles, Liam Payne, Niall Horan, and Louis Tomlinson have repeatedly assured the public that this is not the end, a vague sense of uncertainty still hangs in the air. Is Made In the A.M. One Direction's last album? It's possible, but I sincerely hope not. This isn't the note I want to see them go out on.

To my ears, Made In the A.M. is definitely a step up from the blandness of 2014's FOUR, but it left me longing for the upbeat, carefree material of One Direction's first two LPs, Up All Night and Take Me Home. Since the group first came together on X Factor UK in 2010, a lot of work has gone into managing and maintaining their (mostly) squeaky clean image, so it comes as no surprise that there's no mention of former group member Zayn Malik or the struggles that undoubtedly come with being a part of the world's biggest "boy band" on Made In the A.M. But if the guys couldn't show us at least a little lyrical growth, I wish they would've loosened up a bit and had some more fun. Hopefully, they'll have an opportunity to redeem themselves in the future.

Check out my ranking of One Direction's Made In the A.M. songs below.

No matter how hard I try, I just cannot get into "Drag Me Down." Not a good lead single choice, if you ask me.

"Long Way Down" would've fit well on FOUR (which explains why I don't really care for it).

One Direction have enough cutesy ballads in their discography already — we didn't need "I Want to Write You a Song."

I get major Beatles vibes from "Olivia."

"Infinity" builds nicely to a soaring, Coldplay-esque crescendo. It's a good one.

I get major Paul Simon vibes from "Walking In the Wind."

"End of the Day" is probably too cheesy for most people, but I am not most people.

"Love You Goodbye" is definitely one of the album's catchier tracks.

Does "Hey Angel" remind anybody else of The Verve's "Bitter Sweet Symphony"?

"You and me got a whole lot of history / So don't let it go, we can make some more, we can live forever," the guys sing in "History's" chorus. Fingers crossed they keep their word.

I was not expecting this smooth, disco-infused bop from 1D! "What a Feeling"? More like, "What a Pleasant Surprise"! (Don't worry, I'm done.)

"Wolves" should've replaced "Drag Me Down" or "Long Way Down" on the album's standard edition track list. It's fantastic.

There's a lot going on in "Never Enough's" production, but all of the elements work together beautifully.

Made In the A.M. could've used more songs like "Perfect": it's slick, it's fun, and it's endlessly catchy. It's a modern pop triumph!

Made In the A.M. is available everywhere now.