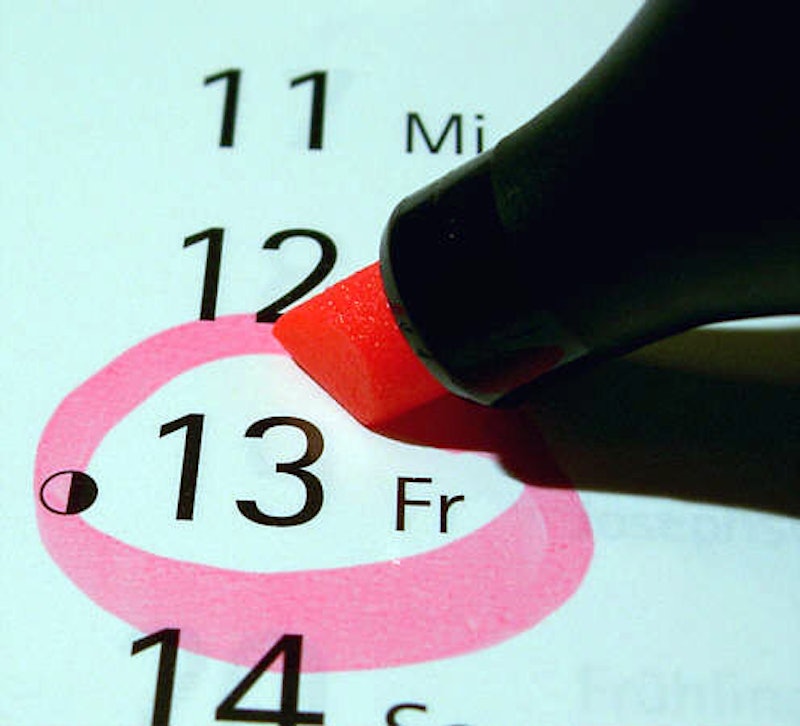 In Western Culture, Friday the 13th is traditionally considered a day of massive bad luck and evil. There are different theories about the origins of the associations of this particular day. Some theorize that the concept arose in the Middle Ages as significant of the Last Supper, where 13 disciples shared the final meal of Jesus. Regardless of its origins, Friday the 13th has imbued itself with cultural significance and created a particularly famous film franchise.

Though pretty much no one actually believes in the superstition nowadays, it's still fun to indulge in the spooky vibe of the day. Particularly when you consider all of the strange and abnormal things that have happened on Friday the 13th — including today. Give in to your creepy side and check out the strange and mysterious history of this day.

On this very Friday the 13th, NASA announced that a piece of space debris, likely a rocket body, will enter the Earth's atmosphere over Sri Lanka today. Unfortunately, there are no Friday the 13th aliens aboard, but you still have to admit it's pretty spooky.

No, the Titanic didn't sink on Friday the 13th. Rather, an Italian cruise ship carrying more than 4,000 passengers struck a reef and began to capsize. The majority of passengers were rescued, though several unfortunately died. The captain of the ship was later convicted for abandoning the ship instead of aiding in the evacuation.

In May 1925, the state of Tennessee passed a law that made it illegal to teach the theory of evolution in schools. The law remained intact until 1967. Very creepy indeed.

In 1307, thousands of members of the Knights Templar were killed by the order of King Louis IV. Fortunately, a few of them must have lived or the National Treasure movies never could have been made. Some theorize that this massacre is the origin of the fear of the date.

5. Avoiding The Day Gets You Nowhere

Reportedly, in August 1976, a man named Daz Baxter chose to stay home in bed. It was Friday the 13th, and he feared if he went out something terrible would happen to him. Unfortunately, while at home, the floor of his apartment collapsed and he fell six stories to his death.

The Aztec civilization, known for its incredible architecture and culture, met its end on Friday, Aug. 13, 1521. Hernán Cortés, a Spanish conquistador, captured the Aztec ruler and appointed himself the new leader, effectively ending the civilization.

In October 1972, a plane carrying 45 passengers crashed in South America. Some people managed to survive the crash, but they were lost in the Andes Mountain range and forced to resort to cannibalism before rescue came more than 72 days later.

Upstate New York is not an area unfamiliar with snow. They certainly get their fair share year in and year out. But in 2006, a record-shattering blizzard struck Buffalo on Oct. 13, leaving the city with 22 inches of snow, and more than one million people without power.

In 2010, a 13-year-old boy in Suffolk, England was struck by lighting on Friday, Aug. 13. As if things couldn't get any weirder, the lightning reportedly hit at 1:13, or 13:13 in military time. The boy survived and was relatively unharmed.

10. The Murder Of Kitty Genovese

On March 13, 1964, a Queens, New York, woman named Kitty Genovese was followed, stabbed, and eventually murdered. The story remains infamous because, as The New York Times originally reported, the attacks were witnessed by 38 people and no one stepped forward to intervene.

On Friday, Oct. 13, 1989, a $6.9 billion dollar buyout deal with United Airlines fell through. The Dow Jones, NASDAQ, and S&P 500 all plunged, resulting in a incredibly low closeout that day. This day is often noted as being the start of a recession in the early '90s.

12. The Murder Of Tupac Shakur

Mystery and doubt still cloud the murder of prolific rapper Tupac Shakur, who was reportedly shot and killed on Sept. 13, 1996. Conspiracy theorists have continued to propagate numerous scenarios about his death.

Friday the 13th is the gift that never stops giving. On April 13, 2029, residents of Earth can expect to see the asteroid "2004 MN4" pass "scarily" close to the planet. So close that you will be able to view the asteroid with the naked eye, no telescope needed.