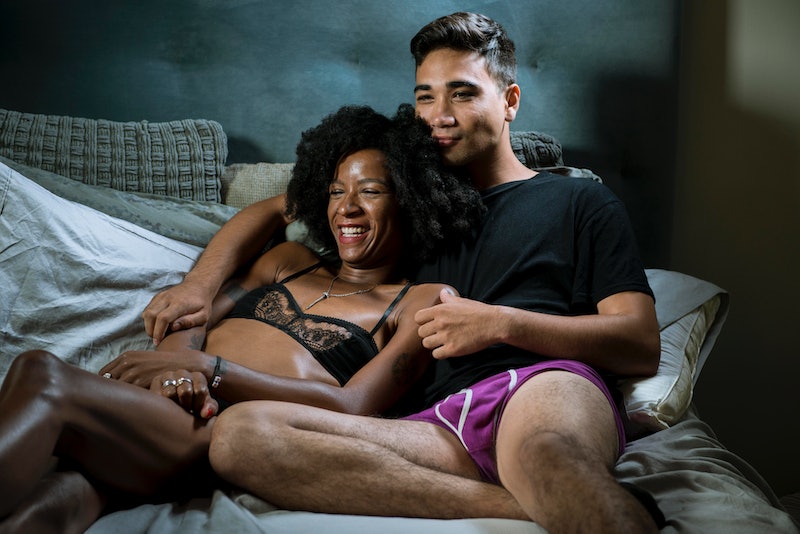 I've always been a relatively jealous person. I can be jealous of people's jobs, people's looks, people's money. But more than anything, I tend to be jealous of whoever else I think a partner finds attractive.

Like most people, my jealousy is the product of two sides of the same coin that is my erratic self-esteem. Heads: I'm the hottest woman in this room, there's no one who's a package deal like me, you idiot, you're lucky to be with me. Tails: I'm the ugliest woman in this room, there are so many women who I'd rather be with if I was you, I'm so lucky to be with you just please don't leave me, also, I hate you right now.

I've found myself in the first relationship of my life that tends to make me feel like a saner version of the "Heads" side nearly all of the time, and an interesting thing has happened. I've begun to want to explore my jealousy — and in small ways, I'm beginning to challenge it.

Jealousy in relationships is usually based on fear and the idea that when you enter into a relationship with someone, you possess them. While those are both very human instincts, they don't always breed the healthiest relationships, and in my case, these motivations have usually left me feeling stifled and unexcited. It sucks to have to either choose between stability and the possibility that you'll ever get to have a new sexual attraction (without guilt) again. But there is a way to be in a relationship that still allows for space and exploration, and that challenges the assumption that love equals total ownership over someone's potential attraction to other people.

There are many, many shades in between that kind of stark monogamy and being full-blown polyamorous, and as I've gotten older, I've noticed that some of the most secure couples appear to be those who give each other the most room to be independent sexual beings. I'm not necessarily talking about non-monogamy here — that's a topic for a whole other article. But I am talking about creating some space in your relationship to challenge and utilize the very human emotion that is jealousy, even if you choose to be monogamous.

Obviously, take all of these ideas with a major side of healthy skepticism— only you know what your relationship dynamic can handle. If one of you is insanely jealous by nature, it's doubtful these will end well for you. But if you want a little excitement and growth and are feeling secure in your relationship, then these ideas might provide an interesting jumping-off point.

5. Watch Each Other Get Touched — Non-Sexually

If you can afford it, get an in-home massage or a private yoga lesson, and have your partner around in the apartment for your "safety," or get the massage or lesson together. You could also both go to a dance class, and watch them be paired off with someone else.

It can be really hot to see someone touch your partner in a safe, non-threatening way, and vice versa. It reminds you what they look like from afar, and lets you reap some of the sexually-heightening benefits of jealousy, without much risk or perceived rejection.

4. Have Them Recount A Fond Ex Memory

OK, perhaps you think it's unethical to kiss and tell, in which case you're a better person than me. But a really fun, mostly safe way to play with jealousy is to ask your partner to describe what sex was like with an ex (you can always choose not to divulge names).

Only you can know whether your imagination will run off in a crazy insecure direction that will end with you holding this disclosure against them, so I suggest fantasizing about them with an ex first, and seeing how it makes you feel. If you feel a little turned on, start by asking them about the ex you feel the least threatened by the next time you're snuggling or making out. Have them recount a fond sexual or romantic memory of their former partner, and wham bam, if you don't end up having some hot sex, then, well … you probably aren't ready for the challenges listed below.

3. Occasionally Point Out People Who Are Your Type

Early on in our relationship, my partner said I should tell him when we passed someone who's especially my type. At first, it seemed like it would be a mean thing to point out to him — but soon, it became our fun little secret. It's exciting to be able to catch his eye and smile, without having to lie and pretend that I couldn't possibly find anyone but him cute. Sometimes, he'll even ask if I like someone, and I'm impressed by how well he knows me. Most of all, it's fun because it doesn't take away from our attraction, or my desire to be with him — it actually strengthens it. Acknowledging outside attraction makes me remember that attraction is physical, mostly surface — but having someone who knows you so well they can even predict your type, and wants you to enjoy looking at other people? That's love.

Now, I feel secure enough that sometimes when I see someone who I know is his type, I'll catch his eye knowingly. (And sometimes I definitely feel too insecure or not in the mood for that, in which case I don't.) But when I'm feeling open and confident, it becomes our little quiet game. Even better? When we see a woman who's both of our type, and catch each other checking her out.

It's nice not to have to pretend you never notice other people. By calling it out, you end up creating more space in the relationship sexually and emotionally. You also begin to realize that other beautiful women don't have to be a threat to you — in fact, you could even view them as sexual amplifiers to your relationship's already killer stereo.

2. Allow Each Other To Flirt

On Halloween, my partner allowed me to engage in an extended flirtation with a hot guy in a gorilla suit. The guy was not someone I'd rather be dating, but he was the kind of guy I like to flirt with at a party. It felt so liberating to know that my flirting with this dude was totally fine with my partner, who was across the room, and later became engaged in a vague flirtation of his own with a woman dressed like a Portlandia character (you can't make this stuff up. I apologize).

When I noticed him talking to her after I'd been flirting for the last hour, I was surprised to find that I didn't feel jealous at all. Sure, she didn't happen to trigger the part of me that finds myself unattractive, but I think that had more to do with the freedom he'd given me than how she looked. Instead of going over to "claim" him right away, I decided to extend him the same space he'd given me.

Later, we talked about our little flirtations, and he mentioned that while he thought she was cute, she lacked a sense of humor, which turned him off (which I chose to take as a compliment about my own). I told him about the guy I'd been talking to, and how he was hot and funny, but clearly not as smart or stable as him. It felt affirming to return to each other not out of blind obligation — but instead after remembering how we each found the other to be the full package.

Obviously, you need to have a clear understanding of your boundaries in advance for this to work, but if you think you can handle it, have a conversation about how much flirting is allowed in your relationship. For example, is it OK so long as there's no touching? Is it OK so long as no numbers are exchanged and nothing can happen beyond talking? Is it OK only if your partner is there and the person you're flirting with knows you're with them? Is it fair game to bring them home with you, if the other person approves?

Every couple should decide for themselves what's right for them. But in my limited experience, the more trust you cultivate within mutually respected boundaries, the less constrained both of you will feel by the relationship.

1. Have a Conversation About Monogamy

First things first: I'm not saying you should have this initial conversation in order to figure out how to become non-monogamous. I'm simply suggesting that if you are monogamous, you have a conversation about why that is, and challenge yourself to think of it as a conscious choice, rather than a default obligation, or fact of life.

This is the most challenging exercise (it was for me, anyway) because it brings up the most vulnerable and insecure feelings. When you start questioning whether monogamy is right for you and your relationship, you bring up all the jealousy, all the insecurity, all sides of the same coin of self-esteem.

Bustle's sex columnist Vanessa Marin has some great advice on questions couples can ask themselves in order to have a conversation about this, as well as a useful guide for how to set rules and boundaries should you decide to try any form of non-monogamy.

But no matter what, if you talk though it, there's a lot to be gained on the other side. Either you'll figure out that a monogamous relationship isn't right for you, and decide to investigate some of the many other relationship options, or you'll both feel more secure in (rather than trapped by) your decision to be monogamous. Either way, you may end up having a big fight. But often, there's some really good stuff on the other end of that fight — that is, if you suspect your relationship can handle it.

Above all else, proceed with caution, but don't protect that ego too closely. There's a lot to be gained from challenging her — even if only theoretically.

More like this
Are Quality Time & Gift-Receiving Love Languages Compatible?
By Lexi Inks
10 Ways To Be More Empathetic To Your Partner
By Raven Ishak and Lexi Inks
Breeding Kinks Have Been On The Rise Since Roe V. Wade Got Overturned
By Lexi Inks
The 19 Best Tweets & Memes About Bisexual Awareness Week
By Lexi Inks
Get Even More From Bustle — Sign Up For The Newsletter